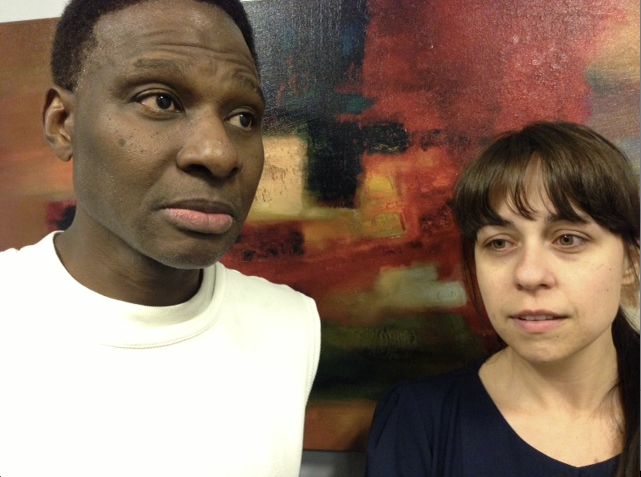 Ten years ago, Kim Jiang-Dubaniewicz sat outside the Chinatown gates nursing an existential crisis; she had serious doubts about pursuing her longtime dream of a career in acting. Just then, she looked up and saw a familiar face drinking coffee next to her. It was Sean Penn, and she asked him for a cigarette even though she didn’t smoke. He told her to stick with acting.

Apparently one doesn’t ignore the advice of Sean Penn.

After several years of acting, the discovery of a store that sold 25-cent paperbacks (including the works of playwrights William Saroyan and Eugene O’Neill), and a move to San Francisco, Jiang-Dubaniewicz wanted to try something new. Last October, she embarked on her first production as a director. The resulting work, The Saroyan O’Neill Project, just finished a two–weekend run at the Postage Stamp Theater in the Potrero Hill Neighborhood House.

In a room that hosts senior lunches by day in a building that has served as a community gathering place for a almost a century, her New City Company staged an energetic piece that worked best in the narrowly focused and understated moments when the play made no attempts to disguise the modesty of the production (the simplicity of the set in the second of two one-acts, a panel of bars in the center of the stage, was probably a reflection both of artistic choice and of the fact that practicing for free in the community room of a police station tends to impose some limits). Hello Out There, the starker of the plays with two characters continuing a mostly linear dialogue that builds into romance, came across beautifully. Gift Harris gave a tight and compelling performance as Photo-Finish, taking us with him through the varying shades of desperation, loneliness, and hope in the repeated cry, “Hello out there!” from which the play earns its name.

The director cast the play well. In the script of Hello Out There, Saroyan describes Photo-Finish simply as “A Young Man,” a phrase that certainly contained an internal set of assumptions about race and ethnicity in 1941 when the play was written. Jiang-Dubaniewicz chose Harris, an African American man who has performed a number of roles on television and stage, because he just seemed to fit. Similarly, she decided to cast The Long Voyage Home, an Irish play from 1917, without regards to race or other qualities that typically account for typecasting in theater.

Discussing what she refers to as “inclusive casting,” the director cites her own experiences struggling with the scarcity of roles for Asian American actors. The same is true with other racial minorities, she says. Many of the African American actors in her cast have opted not to join Actor’s Equity because the number of available roles doesn’t justify the union fee. Not only does Jiang-Dubaniewicz view this as an injustice, but she also sees it as a failure to mirror the reality of the world around us, an aim of theater. “This is our city,” she says. “This is what we look like.”

The “we” implicates the audience, merging the play and the community. The direction of the show emphasized this. Little separated the two rows of guests and the stage, and while this was sometimes unsettling —  the larger cast and chaotic drunken merriment of A Long Voyage Home at times felt too big for the space and distanced the audience — it mostly added to the feeling of intimacy. In the quieter, more finely tuned Hello Out There, the characters spoke facing outward toward the audience, inviting us into the burgeoning love between outcasts.

And the audience participation did not end with the bows. At the end of the performance, Lewis Campbell, the indispensable executive producer, addressed the audience with a half-joking plea for help transforming the space back to its daytime function. In 30 minutes, it would become a senior lunch room once again.

Will the senior lunch room ever transform back into The Postage Stamp Theater? Jiang-Dubaniewicz is considering a number of future projects for the New City Company, including more of the rich anti-hero tales of Saroyan and O’Neill. After the success of this first project, hopefully she won’t need a fortuitous Sean Penn run-in to make it happen.