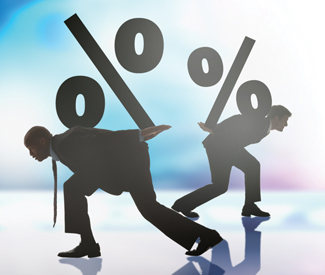 Although few have ever heard of it, there’s probably no number more important to the global financial system than the London Interbank Offered Rate, or LIBOR. Defined precisely, LIBOR is a set of different interest rates that the world’s largest banks charge one another for cash loans denominated in US dollars.

Because of its centrality to the economic system, and the trust placed in it, LIBOR is used to calculate everything from consumer loans and home mortgages to exotic financial derivatives and investments. LIBOR makes the financial world go round, influencing the price of everything. Fortune 500 companies decide whether or not to invest billions in new factories and product lines based on LIBOR’s direction. Governments rethink their debt levels and spending when LIBOR ticks up and down.

It turns out, however, that LIBOR has been a lie, and that the world’s biggest banks rigged the rate to skim off billions of dollars in value from other corporations and the general public. In a devastating set of revelations that began to surface two years ago, the panel of the largest global banks that set the LIBOR rate conspired to manipulate it, to increase or decrease LIBOR, solely because a higher or lower quote on particular days would allow them to reap millions in instant profits.

US authorities working with regulators in the UK, Japan, Switzerland, and Singapore are currently investigating upwards of two dozen banks in what is probably the single biggest financial crime ever perpetrated. So far, employees of Barclay’s, UBS, and Credit Suisse have been fired, arrested, and charged. Many more criminal prosecutions are surely coming, but the real battle will be in the civil courts and the court of public opinion.

To date only a handful of civil lawsuits have been filed, the first shot fired by the city of Baltimore early last year. Last month, the County of San Mateo, city of Richmond, and the East Bay Municipal Utility District filed their own cases which were quickly consolidated into a growing class action to be heard in New York’s Southern District Federal Court.

Now San Francisco is set to enter the ring. On January 29, Supervisor John Avalos called for public hearings to review the impact of LIBOR manipulation on San Francisco’s finances, starting next week. While other cities and public agencies might be ahead in the federal courts, Avalos’s recommendation takes the investigation further, and in a different direction.

“We’re trying to assess how the LIBOR scandal affects San Francisco, and that’s what the hearing is about,” Avalos told the Guardian. “These banks rigged the financial markets for their own benefit and the global economy suffered as a result.”

While early indications are that San Francisco is better protected than many jurisdictions, Avalos said, “I think it’s important to stand with other cities and counties that are suffering.” Or as his legislative aide Jeremy Pollock told us, “When a major city like San Francisco calls for hearings, it’ll get a lot more attention. The hearing will be an educational process for everyone to understand how this complicated financial world really works.”

Former Supervisor Chris Daly, now the political director for Service Employees International Union Local 1021, which represents most city employees, said there’s a need to hold the banks publicly accountable. “These other jurisdictions that have filed suit haven’t had a big public process. We don’t want to see settlements for less in courtrooms. We want to see the full public exposure of the issue, and in terms of the cause of bank accountability, it is the better approach.”

Avalos has already met with the heads of different city departments and agencies in an effort to determine what kinds of losses the public might have sustained as a result of LIBOR rigging. Pollock said the city’s finance staff and attorneys are currently working closely with the city’s airport, retirement system, and Office of the Treasurer to gauge the size of the problem.

“LIBOR rigging may have impacted the payments under the airport’s swaps,” said Kevin Kone, who oversees capital finance for the San Francisco International Airport. The swaps Kone is referring to include seven interest rate swaps that the airport used to convert variable rate debts into fixed rates for half a billion of SFO’s bonds (see “The losing bets,” 2/28/12).

The swaps require SFO to pay a fixed rate of between 3.4 and 3.9 percent on its half-billion dollars in debt, while the banks pay about 60 percent of LIBOR. When SFO signed these swap contracts years ago, 60 percent of LIBOR was roughly equal to 3.4 percent, meaning the net payments between SFO and the banks basically canceled one another out. However, if LIBOR was later rigged downward by the banks, then the net interest rate payments would shift in favor of the banks, draining hundreds of thousands or even millions from SFO’s capital budget.

“As an example of the order of magnitude, if LIBOR were set artificially low by 0.25 percent for a full two years, the Airport would receive $900,000 less each year (for a total of $1.8 million) than it should from its swap counterparties,” explained Kone in an email.

Other losses may have been suffered by the San Francisco Employees’ Retirement System which makes investments in derivative instruments that are linked to LIBOR. “The retirement board has been looking at this,” said Nadia Sesay, director of the Controller’s Office of Public Finance. “We know Retirement has exposure and they’re assessing their portfolios.”

Still more losses due to LIBOR-linked instruments on the city’s books will be investments held by the city treasury in pooled funds. Banks offer various investment products to local governments that need a temporary place to park millions or billions in cash; the returns on these investment are often pegged to LIBOR. Just as with the airport’s swaps with JPMorgan and Merrill Lynch subsidiary, often times these so-called “municipal derivatives” investments are sold to cities by the same global banks that sit on the British Banker’s Association panels that determine the various LIBOR rates.

That’s one of the most alarming things about the LIBOR scandal: how absurdly easy it was for just 16 banks to rig the entire world financial system in their favor for several years on end. LIBOR isn’t actually a market rate that is determined by the loans banks make to one another. Rather, it’s a rate the banks claim they would able to secure loans from their peers, and the final LIBOR numbers for any given day are determined not by some independent authority, but instead by the British Bankers Association’s panel members — the banks themselves.

“The problem is that there’s a clear conflict of interest,” explained Rosa Abrantes-Metz, an economist at the NYU Stern School of Business who has closely studied LIBOR and is an expert in financial markets and cartels. “Banks make proprietary trades on instruments related to LIBOR, so they do have an interest in moving LIBOR in their own favor.”

Abrantes-Metz is currently working as an expert in several LIBOR lawsuits. Among her recent research findings in studies that tracked LIBOR alongside other economic indicators is that all the conditions of a potential conspiracy are present, and empirical evidence points toward coordinated fraud. “The banks had, as we say, the means, motive, and opportunity,” concluded Abrantes-Metz.

Regardless of what San Francisco’s public hearings on LIBOR uncover, the road ahead will be long and complicated. When asked about the the expected flood of LIBOR litigation, Abrantes-Metz said it’s just getting started. “We’ve only had the settlements of three banks with the authorities [Barclays, UBS, and Credit Suisse]. I’ve read there are investigations of 14 of the 16 banks that were on the LIBOR panel. That’s just US Dollar LIBOR.”

“Then there’s Euroibor, and there’s 40 banks on that panel. Then there’s Tibor which some overlapping banks with Yen Libor banks,” said Abrantes-Metz, referring to other key global interest rates denominated in Euros and Yen. Like LIBOR, these lesser rates are used to calculate the values and obligations of trillions in securities and payments.

“Those are just the governmental investigations,” said Abrantes-Metz. “I’m sure as more evidence comes out of these settlements it will probably generate more private litigation. I think this is to go on for very many years.”

Meanwhile, a proposal that Avalos made in the fall of 2011 to have the city start a municipal bank is nearing completion of its legal analysis by the City Attorney’s Office. While it’s legally complicated and wouldn’t eliminate the local need for big banks, he said the LIBOR scandal reinforces the need for alternative lending institutions with great public accountability. “My goal is this year to have something on paper that will lead to a municipal bank,” Avalos told us. “These institutions are willing to rig the system, and we could protect ourselves more locally if we had a banking institution.”