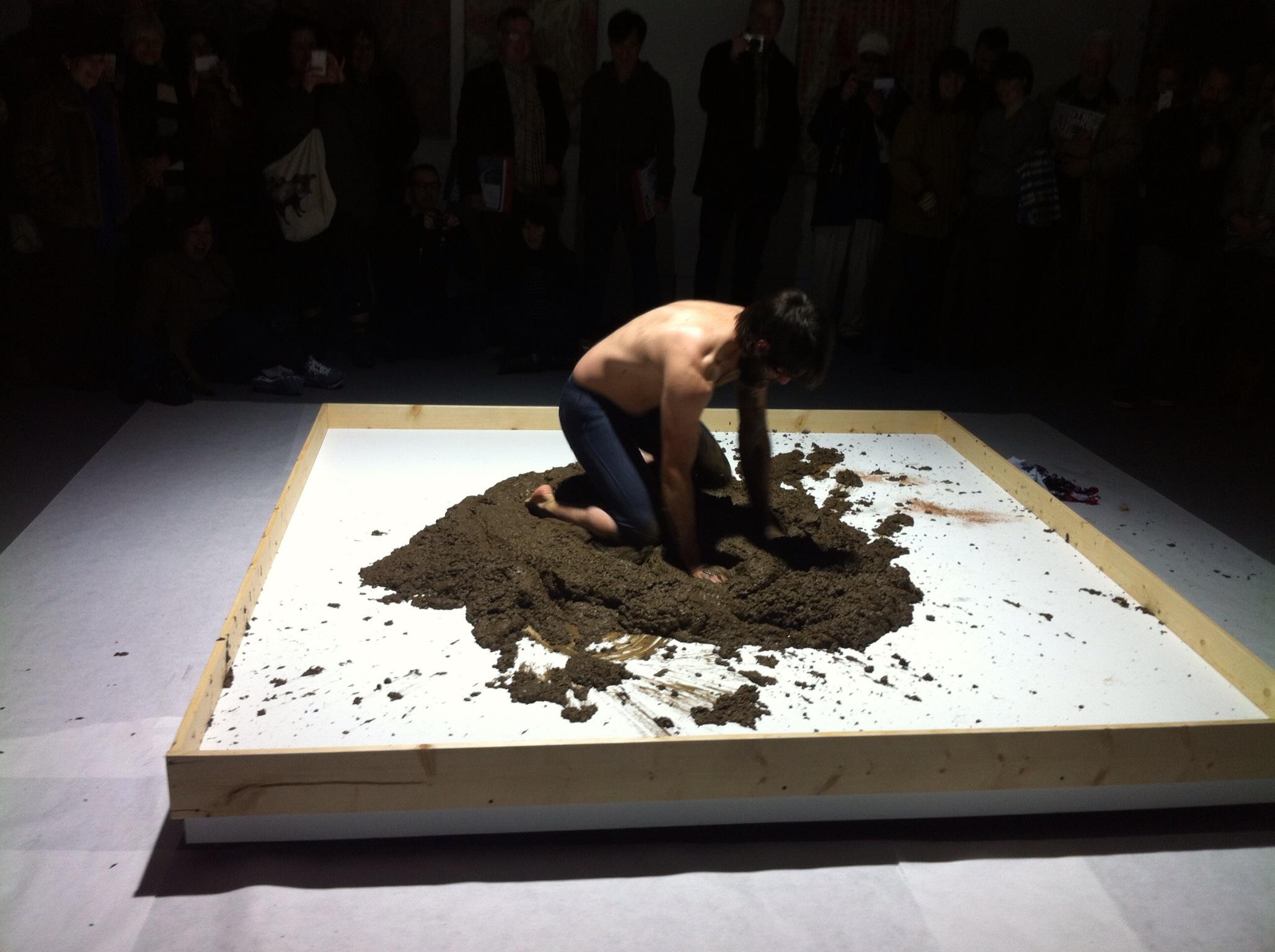 The crowd cheers as a man decked out in stars and stripes makes his way through a packed staircase. He pauses at the landing and raises his arms over head in a salute of glory to the whooping and clapping masses below him.

“San Francisco, we give you the death match of the century,” a voice booms from speakers.

The costumed figure presses through to the opening in the center of the room and circles the white platform where his foe awaits. He slaps the hands of a few children sitting in front before disrobing until he wears only blue knee-length tights and a bushy brown beard. He enters the square and stands above his opponent.

The announcer continues: “Mud versus the man himself, Jeremiah Jenkins.” The man dives into a brown mass that resembles a giant pile of feces.

This was the scene at the San Francisco Institute of Art last Friday, where the Gutai Historical Survey and Contemporary Response exhibition opened with a bang — or rather with the revving of the dirt bike that Guy Overfelt blasted through four paper screens later in the evening. The event, which included the two theatrical pieces by local artists Jenkins and Overfelt, brought the Japanese avant-garde movement to life by recreating the sense of revelation upon which Gutai formed in 1954.
Jiro Yoshihara, the founder of the post-war movement, challenged his followers to “do something no one’s ever done before.” For the members in the Gutai Art Association, originality emerged in the form of a dress comprised of electric lights, earth-toned compositions created by scraping fingernails across the surface of paint, and large-scale records of feet spreading thick paint around canvas. Gutai means “concrete,” or “embodiment,” and the artists physically (and sometimes literally) threw themselves into their work. A range of the resulting pieces hung on walls at SFAI.

Before their temporary plastic coverings heralded flying mud, though, the paintings spoke for themselves; even without the context of their unique creative process, the works convey a sense of kinetic vitality. In one of the most compelling pieces, a 1960 oil painting by Kazuo Shiraga, Chisonsei Isshika, a red mass of paint on the right meets blue-black on the left and both spread outward over a white base in three-dimensional sweeps and splatters that testify to the physical gestures of their creation.

Though some of the works reflect the more whimsical side of the quest for novelty (the side that the performance pieces expanded on to a comic degree), Shiraga’s painting captures something coarser, more intense. The physicality of the paint seemed to manifest raw expression.

Gutai, however, is not the only artistic movement to employ a doctrine of bodily expression. Both the principles and the pieces they produced recall Action Painting of Abstract Expressionism, practiced by artists such as Jackson Pollock and Willem de Kooning. The connection has a historical basis. Though Gutai did not intersect with the New York-based movement, Gutai aligned itself with Abstract Expressionism’s European counterpart, Tachisme, after a French critic visited the Japanese school.

The American school’s rejection of Tachisme partially accounts for why Gutai has largely remained under the radar. Upstairs in the gallery, a display of Gutai books and posters of past exhibitions — taking place in Japan only — demonstrate the lack of awareness in the United States. But the exhibition also shows a shift. Shozo Shimamoto, the Gutai artist who used his bald head as a canvas, died in January, and in order to pay tribute to the man and his “mail art” associations, curator John Held, Jr. sent out a call for mail responses. The many captivating pieces of DIY art Held received show both Shimamoto’s legacy and the expanding legacy of Gutai in America. Last year, an exhibition at the Los Angeles Museum of Contemporary Art featured Gutai, and a Gutai retrospective opens this week at the Guggenheim in New York.

(SFAI’s “Experimental Exhibition of Modern Art to Challenge the Mid-Winter Burning Sun,” whose name borrows from a 1955 Gutai Art Association exhibition, is the only one to include a mud pit and a dirt bike.)

For all of the spectators who experienced the mud pit and dirt bike, who not only saw art but also witnessed Overfelt crash through the panels and Jenkins fight vigorously against a pile of mud, Gutai is more than static paint and the facts on the labels beside the pieces. It is an art of playfulness, of energy, and of innovation. Undertaking the directive to do something that’s never been done before is a greater challenge 41 years after its initial presentation, but by experimenting in the space between parody and earnestness, the exhibition succeeded.

The farcical wrestling match between man and mud yielded more than absurd and gimmicky entertainment. After the artist left through a side door (it was unclear whether in triumph or defeat), several people approached the stage and began photographing the sludge that Jenkins had moved with his body. It had scattered around the square platform, piling up in some places and spreading thinly in others. Then the gallery lights came on and the plastic came off the paintings, revealing that the mud on the stage mirrored the large all-red Shiraga with roughly textured paint behind it. All of a sudden, the mud became more of a work of art and the art became more of a physical work. Only after the comedic performance could we see that we had witnessed an act of creation. A WWE-style act of creation.