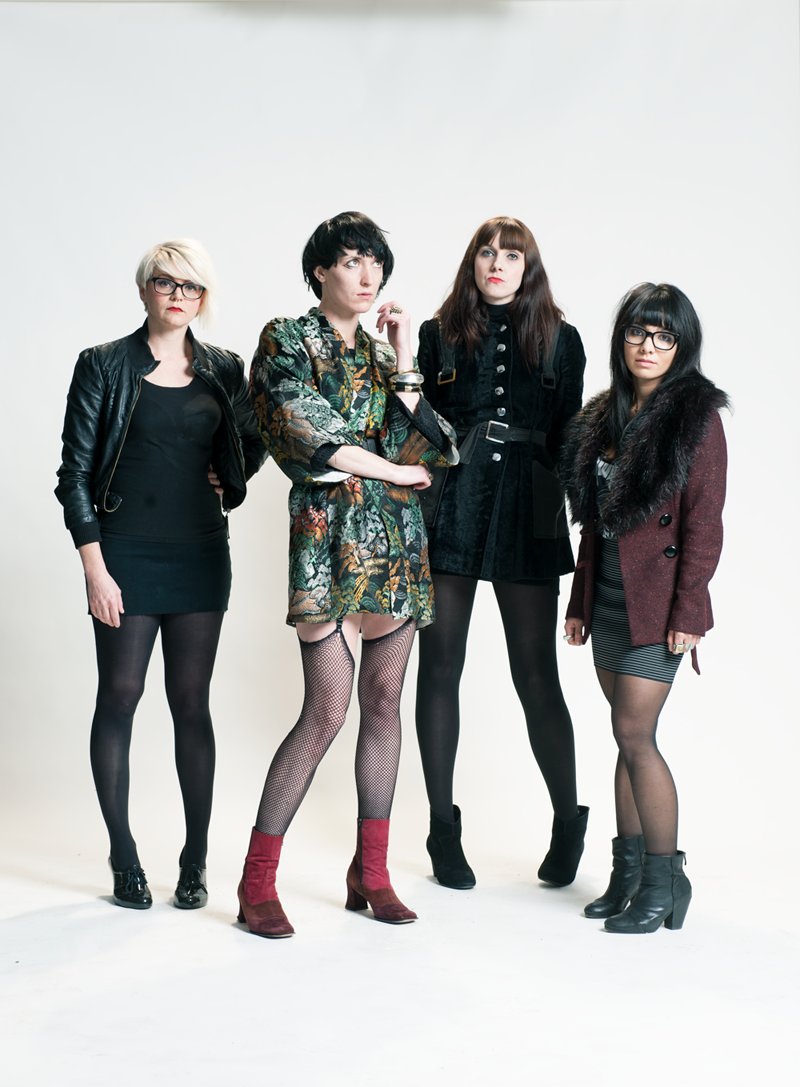 If anything threatened to overshadow the attention around Wax Idols’ epic new album and front person Hether Fortune’s stage presence, it might have been Fortune’s social media-documented quickie Reno wedding to rocker Tim Gick of TV Ghost earlier this month. But from another angle, it just adds to her appeal. The dominatrix/singer seems full of passion, lust, and complicated relationships, and they bleed out of her any way she lets them, be it through her robust Twitter flow, her personal relations, or her beautiful, darkly maturing music.

Sample tweet: “I want all of the people that I love & admire to take charge of their inner worlds & wreak glorious havoc on the world we share.” Sample lyric: “Let’s turn down the static world/listen to the sound of a void.”

The latter is from “Sound of a Void” off Wax Idols’ upcoming second full-length Discipline & Desire, out March 26 on Slumberland Records, a surprising departure from 2011’s equally enticing, yet far punkier, No Future (Hozac). This new darkwave record sees Fortune — along with Jennifer Mundy, Amy Rosenoff, and Rachel Travers — exploring the dungeons of orgasm addict sexuality and violence with wry lyrics, bolder Siouxsie Sioux vocals, and Joy Division and Love and Rockets-honoring riffs.

If you’re concerned Fortune will no longer be as tough as a wifey (you sexist jerk, you), consider this: following her Nevada wedding, she played the Uptown the very next night, had a blast, and smashed a glass.

What you like most about the Bay Area music scene: HETHER: I like the diversity and the constant evolution I’ve seen in my five years here thus far. I’ve met some truly legendary artists and characters.

JEN: I like the diversity of bands and the feeling of camaraderie in the local music community. It’s a really exciting time for music in the Bay Area and I’ve seen some excellent bands. And it’s great that you can catch a show just about any night of the week.

AMY: Recently, there have been a lot of new, dark bands that don’t have the typical “rock” sound. I don’t think the dark music scene here has had this much going on for quite a while. It’s really nice to have a good group of local musicians whose music and style I can find inspiring and relate to.

RACHEL: That it has actually progressed into something viable!

What piece of music means a lot to you: HETHER: “The Mercy Seat” by Nick Cave and the Bad Seeds. Never has a song filled me with such an immense feeling of anxiety, tension and fear and then released those feelings in such a cathartic, overwhelming and beautiful way…That and “Heroes” by David Bowie/Brian Eno (greatest song of all time — don’t argue with me).

JEN: “Sunday Morning” by the Velvet Underground, and pretty much the entire VU and Nico album.

AMY: The album Pornography by The Cure.

RACHEL: The Cure’s Head on the Door.

Who would you most like to tour with: HETHER: Nick Cave

AMY: I would love to tour with the Raveonettes.

RACHEL: If I had a time machine, Mozart — because who wouldn’t want to tromp around European high society? But really, Chelsea Wolfe.