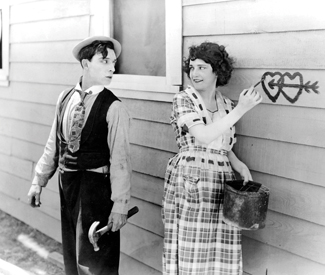 FILM The 2013 San Francisco Silent Film Festival isn’t until July, but the fest’s Silent Winter offshoot offers a day packed full of classic delights to tide over its legions of fans until summer. The Castro Theatre plays host to four features and one shorts program, all of which boast live musical accompaniment.

Silent Winter’s earliest (1916) and latest films (1927) are both buoyed by charismatic leading ladies: Marguerite Clark, in J. Searle Dawley’s Snow White, and Mary Pickford in Sam Taylor’s My Best Girl. Clark, who found early fame as a Broadway star, was already in her 30s by the time film acting became a viable career option. No matter — she’s believably girlish as the princess with “skin white as snow,” hated by her jealous stepmother, whose own beauty comes courtesy of witchcraft. (Dig the proto-Witchiepoo who helps the conniving queen in her various evil schemes, and her giant kitty helper, too.) A teenage Walt Disney saw the film in 1917 and made animation history with the same story 20 years later — though his heroine lacks Clark’s easy effervescence.

Pickford’s own joie de vivre has been exhaustively documented, but she’s particularly charming in My Best Girl, a late-career film that marked her final silent film, as well as her only onscreen pairing with the man who’d become her third husband, Buddy Rogers (in a marriage that would last from 1937 until her death in 1979). Watching My Best Girl is an excellent reminder that the romantic comedy structure still used with great frequency today — boy meets girl, boy loses girl, boy wins girl back just in time for a happy ending — is very much an old-school invention. Here, Pickford plays sassy shopgirl Maggie, who has no idea her cute new co-worker, Joe (Rogers), is actually the store owner’s son pulling an Undercover Boss.

Though My Best Girl is ostensibly a comedy, Pickford’s standout scenes are the film’s most melodramatic: first, when she conveys equal parts mortification and heartbreak when she realizes who her new crush really is, and later, when she pretends to be a gold-digging jazz baby to chase him away, believing he’s too good for her. Sob. Suck it, Reese, Julia, and whoever else — Mary (who was actually Canadian) is America’s sweetheart forever.

Buster Keaton, another actor (and director) much-beloved by silent film fans, is spotlighted in “Think Slow, Act Fast,” a program of three early shorts. The Scarecrow (1920), about a pair of farm hands battling over the farmer’s comely daughter, features a winning turn by one of Hollywood’s first canine stars — Luke, a pit bull owned by Keaton mentor Fatty Arbuckle. One Week (1920) follows a hapless newlywed couple as they attempt to assemble their pre-fab house; it’s a set-up that offers ample opportunity to showcase Keaton’s physical-comedy gifts. Third entry The Play House (1921) opens with what was a dazzling special-effects achievement at the time, as multiple Keatons play all of the parts in a minstrel show (yes, there’s blackface). After this Keaton-opoly is revealed to be a backstage dream, the rest of the short follows the comedian as he woos a twin he can’t quite tell apart from her sister — pausing here and there to crash different shows, including one where he impersonates a monkey.