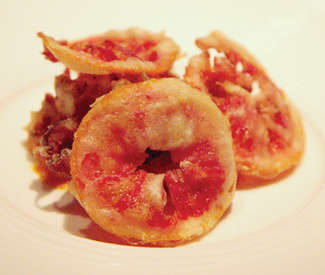 APPETITE Nothing replaces actually experiencing a cuisine served in its place of origin, but regional dinners are one way of traveling vicariously (and, perhaps, with less of a carbon footprint).

Occasionally, you get more than a meal, as with a January 23 dinner at Oakland’s Latin American haven, Bocanova (www.bocanova.com), which hosts the monthly Rick’s Supper Club, highlighting South American cuisine. As a lucky few dug into wild shrimp and lobster ceviche or smoky, steamed mussels, dinner sponsor LAN Airlines surprised attendees with free round trip tickets to fly to any South American destination… a freak out “Oprah moment.” In lieu of that kind of bell and whistle, here are two restaurants fiercely dedicated to uncovering the subtlety of their chosen cuisine.

Since opening in 2008, Gitane is easily one of our sexiest restaurants. Ducking into an alley, down a couple steps into the lush reds, tapestries, and chandelier glow of a tiny, two level space… so begins your seduction by a lover who knows how. Executive chef Bridget Batson has been here since the beginning. In November, the restaurant shifted directions with the addition her husband, co-executive chef Patrick Kelly (of La Folie and Napa’s Angèle), and chef de cuisine David Martinez.