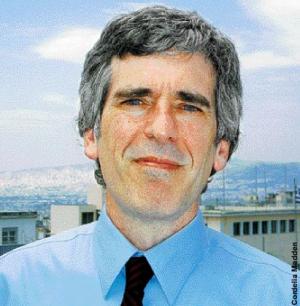 When Secretary of State Colin Powell spoke to the U.N. Security Council on February 5, 2003, countless journalists in the United States extolled him for a masterful performance — making the case that Saddam Hussein’s Iraq had weapons of mass destruction. The fact that the speech later became notorious should not obscure how easily truth becomes irrelevant in the process of going to war.

Ten years later — with Powell’s speech a historic testament of shameless deception leading to vast carnage — we may not remember the extent of the fervent accolades. At the time, fawning praise was profuse across the USA’s mainline media spectrum, including the nation’s reputedly great newspapers.

The New York Times editorialized that Powell “was all the more convincing because he dispensed with apocalyptic invocations of a struggle of good and evil and focused on shaping a sober, factual case against Mr. Hussein’s regime.” The Washington Post was more war-crazed, headlining its editorial “Irrefutable” and declaring that after Powell’s U.N. presentation “it is hard to imagine how anyone could doubt that Iraq possesses weapons of mass destruction.”

Yet basic flaws in Powell’s U.N. speech were abundant. Slanted translations of phone intercepts rendered them sinister. Interpretations of unclear surveillance photos stretched to concoct the worst. Summaries of cherry-picked intelligence detoured around evidence that Iraq no longer had WMDs. Ballyhooed documents about an Iraqi quest for uranium were forgeries.

Assumptions about U.S. prerogatives also went largely unquestioned. In response to Powell’s warning that the U.N. Security Council would place itself “in danger of irrelevance” by failing to endorse a U.S.-led invasion of Iraq, the adulation from U.S. media embraced the notion that the United Nations could only be “relevant” by bending to Washington’s wishes. A combination of cooked intelligence and geopolitical arrogance, served up to rapturous reviews at home, set the stage for what was to come.

The invasion began six weeks after Powell’s tour de force at the United Nations. Soon, a search for Iraqi weapons of mass destruction was in full swing. None turned up. In January 2004 — 11 months after Powell’s U.N. speech — the Carnegie Endowment for International Peace released a report concluding that top officials in the Bush administration “systematically misrepresented the threat from Iraq’s WMD and ballistic missile programs.”

Left twisting in the wind was Powell’s speech to the U.N. Security Council, where he’d issued a “conservative estimate” that Iraq “has a stockpile of between 100 and 500 tons of chemical weapons agent.” The secretary of state had declared: “There can be no doubt that Saddam Hussein has biological weapons and the capability to rapidly produce more, many more.”

Nineteen months after the speech, in mid-September 2004, Powell made a terse public acknowledgment. “I think it’s unlikely that we will find any stockpiles,” he said. But no gingerly climb-down could mitigate the bloodshed that continued in Iraq.

A decade ago,  Powell played a starring role in a recurring type of political dramaturgy. Scripts vary, while similar dramas play out on a variety of scales. Behind a gauzy curtain, top officials engage in decision-making on war that gives democracy short shrift. For the public, crucial information that bears on the wisdom of warfare remains opaque or out of sight.

Among the powerful and not-so-powerful, in mass media and on Capitol Hill, the default position is still to defer to presidential momentum for war. Public candor and policy introspection remain in short supply.

The new secretary of state, John Kerry — like the one he just replaced, Hillary Clinton — voted for the Iraq war resolution in the Senate, nearly four months before Powell went to the U.N. Security Council. During the crucial lead-up months, Senator Kerry was at pains to show his avid support for an invasion. In early October 2002, appearing for an hour on MSNBC’s “Hardball” program live from The Citadel as an audience of young cadets filled the screen, Kerry said: “I’m prepared to go. I think people understand that Saddam Hussein is a danger.”

Since then, Kerry has publicly said that he would have voted for the war resolution even if he’d known that Iraq actually had no weapons of mass destruction. But on the Senate floor, Kerry prefaced his vote for war by rhetorically demanding to know why Saddam Hussein was “attempting to develop nuclear weapons when most nations don’t even try.” The senator emphasized that “according to intelligence, Iraq has chemical and biological weapons.”

Months later, when Powell trumpeted that theme at the United Nations, the landslide of testimonials included this one from a future U.S. ambassador to the U.N., Susan Rice: “I think he has proved that Iraq has these weapons and is hiding them, and I don’t think many informed people doubted that.”

Meanwhile, the Washington Post edition with the editorial headlined “Irrefutable” also included unanimous agreement from each of the opinion columns on the facing page.

Longtime Post columnist Richard Cohen attested to Powell’s unquestionable veracity with these words: “The evidence he presented to the United Nations — some of it circumstantial, some of it absolutely bone-chilling in its detail — had to prove to anyone that Iraq not only hasn’t accounted for its weapons of mass destruction but without a doubt still retains them. Only a fool — or possibly a Frenchman – could conclude otherwise.”

Inches away, another venerable pundit held forth. Powell managed to “present the world with a convincing and detailed X-ray of Iraq’s secret weapons and terrorism programs yesterday,” wrote Jim Hoagland, a Post foreign-policy specialist. He concluded: “To continue to say that the Bush administration has not made its case, you must now believe that Colin Powell lied in the most serious statement he will ever make, or was taken in by manufactured evidence. I don’t believe that. Today, neither should you.”

Fast forward to the current era. What are Richard Cohen and Jim Hoagland writing — about Iran?

On February 6, 2012, exactly nine years after proclaiming that “only a fool” could doubt Iraq had weapons of mass destruction, Cohen’s column declared flatly: “The ultimate remedy is Iranian regime change.” Four months ago, Cohen wrapped up a column by observing “there is still time for Iran to back down before President Obama’s red line — no nuclear weapon — is crossed. This is a war whose time has not yet come.” Not yet.

Hoagland — a decade after telling readers they should put their trust in Colin Powell’s “convincing and detailed X-ray of Iraq’s secret weapons” — is now making clear that his patience with Iran is wearing thin. “Until recently,” Hoagland wrote five weeks ago, “I had been relatively comfortable with Obama’s assertions that there is time to reach a peaceful resolution with Iran.” Hoagland’s column went on to say that military strikes on Iran “threaten disastrous political and economic consequences for the world,” so diplomatic efforts should try to avert the need for such strikes — before they become necessary.

So goes the dominant spectrum of opinionating and policymaking for war, from eagerness to reluctance. Propaganda lead-ups to warfare are as varied as wars themselves; and yet every style of such propaganda relies on deception, and every war is unspeakable horror.

After jumping onto ghastly bandwagons for one war after another, the nation’s media establishment is available to do it again. So is the current U.S. ambassador to the United Nations. So is the new secretary of state. They’re old hands, dripping with blood. They have not had enough.