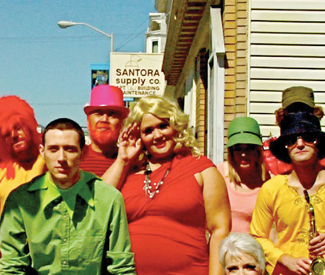 FILM Vincent Gargiulo is originally from Stockton and lives in San Francisco, but I spoke with him over the phone from Duluth, Minn., where he’s about to start filming his latest project, Duluth is Horrible. “So far, it’s actually lovely,” he admits. “But Duluth is Lovely, nobody wants to watch that movie.”

The title came to him in a dream — he’d never been to Duluth before — but he decided to take the inspiration and run with it. “I came up with a bunch of little stories, semi-based on my life, and decided to set it in Duluth and use that title, and here I am,” he says, noting that he’s casting locals to act in the project. “A lot of people have been supportive, and a lot have not been. But I’m just hanging out with the supportive ones.”

Before his Great Lakes odyssey, Gargiulo was best-known for a pair of videos that brought him a certain amount of notoriety: “David’s Pizza Commercial” (which has over half a million views on YouTube) and “Taste the Biscuit,” which caught comedian George Lopez’s eye and became a running joke on Lopez Tonight. Both clips are excerpts from longer Gargiulo projects; the pizza ad was part of a 1980s TV parody, KNFR From 7:00-7:30.

“I needed some local commercials, and I came up with this pizza song. I thought, ‘I should just give it to a random pizza place,’ so I gave it to David’s Pizza in Stockton — they got a commercial without them knowing about it,” he says. “I thought if anything from that film would have viral potential, it would be that, because the song’s pretty catchy. So I just put it out there, and sure enough, it did. I mean, I like all attention I can get, but I don’t necessarily seek it out. It was funny because a lot of people were interviewing David — he was on talk shows and stuff, and it was fun to watch. And they don’t even mention me at all.”

The San Francisco Independent Film Festival’s local-shorts focus, “Cults, Manholes, and Slide Rail Riders,” contains seven entries, but only one that features humans playing puppets. That’d be Gargiulo’s The Muppetless Movie, a fake movie trailer that pays earnest homage to the Muppets as only a true fan with a crazy idea can. The casting is impeccable: the director busts out a killer Kermit impression, and there’s dead-on Statler and Waldorf banter and an uncannily perfect Gonzo.

“I am a huge Muppets fan,” Gargiulo admits. “The new Muppet movie was coming out at that time, and I was afraid it was gonna suck. So I thought, ‘I’ll make my own Muppet movie, just to be on the safe side.’ Originally I was going to use puppets, but there’s probably more legal issues there. So I decided to have humans do it instead.”

Just about the only thing Manhole 452 has in common with Muppetless is that it’s another standout in “Cults, Manholes, and Slide Rail Riders.” Jeanne C. Finley and John Muse’s eerie short is narrated by an unseen commuter as he nervously rides the 38 Geary downtown from the Richmond. His paranoia: exploding manholes. As the film progresses, his fears are backed up by found footage depicting actual manhole explosions. His unease become ours, as we start to realize he’s onto something real and terrifying.

Muse and Finley have been working together since 1988; for the past several years, it’s been a cross-country collaboration, since Muse teaches at Haverford College in Pennsylvania, and Finley teaches at California College of the Arts in SF. Manhole 452 originally appeared as part of a 2011 installation at Patricia Sweetow Gallery, whose Geary Street location provided early inspiration.

“My antenna was up, as was John’s, around the question of manhole covers,” Finley recalls. “We did a lot of research, and it became really evident that they blow all the time. For example, three days before our show opened, a manhole blew right in front of the gallery. So we were aware of this phenomenon — and then San Bruno happened. A horrible, horrible tragedy.”

Soon after, the pair wrote a script based on actual stories that they’d dug up, interwoven with a character they imagined as their narrator: a man who’d had a manhole blow under his car while he was driving down Geary, forcing him to take the bus — and to question the stability of his surroundings.

“A lot of our work deals with inexplicable, unpredictable random events and the relationship of personal will to those random events: how do you confront an event of that nature, and move through it? And as you move on, how do you take it with you?” Finley explains.

Adds Muse, “We tend to try and make free-floating anxieties explicit and real, and give them shape. In this case, it’s the street: the street is a surface, it’s a membrane, it’s porous and delicate. At any moment that membrane could be torn away, and the fragility of everything is suddenly exposed. We thought about that metaphor a lot — the surface of the street as barely protecting us from what’s underneath.” *