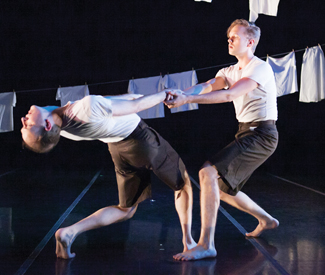 DANCE Once a year, long-time colleagues Todd Eckert and Nol Simonse share an evening showcasing their choreography. Unfortunately, the “Shared Space Six” program, presented last weekend at Dance Mission Theater, was not as promising as one would have hoped. Most dispiriting was that the evening’s best piece, Eckert’s Disparate Affinity, dates back to 2006.

Performed by Eckert and his former colleague at Robert Moses’ Kin, Katherine Wells, Disparate is a sensitively developed exploration of how two different people can inhabit similar universes. Here, they become aware of each other, finally get together only to separate again.

With her long-limbed physique, Wells looks as fragile as a reed, but she has a fierce and versatile technique, making her one of the finest dancers in the Bay Area. She and Eckert — strong, muscular, and sturdy — complemented each other excellently. At first occupying opposite spaces on stage, they engaged in a long-distance conversation. When they finally met, touch became an essential part of their connecting. As Eckert floated away, she was left holding in her hand the space he had occupied.

Unfortunately, Simonse badly misstepped in the premiere of his disappointing Kafka Sex Party, set primarily on himself and four male dancers, with Tanya Bello and Kaitlyn Ebert acting as, perhaps, guides to a netherworld. Referencing the fate of Gregor Samsa in Kafka’s The Metamorphosis, Simonse wiggled in with a giant shell on his back. He repeatedly asserted that this was who he was, and if you wanted to touch him, that’s what you’d get. Bello and Ebert, in black accessorized with aviator sunglasses, cheerfully liberated him, and the scene shifted to a dungeon.

Bathed in murky red light, the men — in black leather dance belts — pumped, stretched, and slid onto each other’s bodies, coupling and retreating. At one point, three of them squeezed themselves into a sandwich. These anonymous encounters occurred as if on cue, as did the periodic group hops and risings from the back like the spokes of a wheel. In the work’s third section, white streamers were lowered from a fan into a maypole for the men to dance around. Was it a dream or a nightmare, or both?

Last year, Simonse danced in a black ruffled skirt with Theatre Flamenco. He looked fabulous. So perhaps, it’s not surprising that for the premiere of I Could Never Make You Stay he donned a white facsimile. His and Eckert’s first try at co-creation yielded an unwieldy but harmless affair with some fine and a lot of meandering dancing. Each choreographer contributed a perspective on impermanence.

Eckert’s duet with handsomely trained newcomer David Schleiffers had the two men locked in a frozen head-to-head collision. It’s an image that would re-occur. They looked like boxers waiting for the referee to step in. But then some mysterious force started to turn and unglue them into luscious encounters with sensuously interlocking arms and a sense of spacious, though temporary, connection between them.

Taking a break from hanging laundry, Simonse’s well-paced solo sent him scurrying along the ground, loping across the stage, curling and shooting his limbs in all directions. Dancing on to his toes with his arms into ballet’s high fifth position, he projected his longing upward. I Could Never‘s most charming sequence, however, came with an unlikely duet for tall, sturdy and visibly pregnant Peta Barrett and a weasel-like Chad Dawson.

The white T-shirts on Simonse’s laundry line may have stood for past loves — but perhaps they were just ordinary white shirts. A quartet of women, in a feminist metaphor, wiped the floor with them, or donned them as accoutrements. The grand finale’s 16 whirling dancers cheerfully asserted as couples the work’s title, and indeed, they couldn’t make each other stay. Dressed in voluminous white wedding gowns, they looked as if they’d been plopped into creampuffs. Rigorously shaking their colorfully clad legs, they metamorphosed into circus artists.