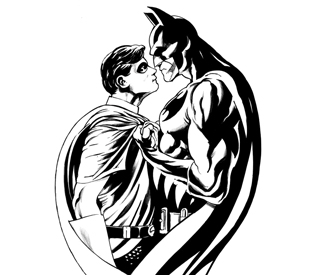 VISUAL ARTS “When I first saw the 1970s comics version of Batman by Neal Adams, I got a bit weak-kneed — though I was too young to know what that meant at the time,” comics artist Justin Hall (“No Straight Lines: Four Decades of Queer Comics,” “Glamazonia”) told me over a beer at his Mission apartment. “Here was a more realist Batman, with muscles and chest hair … and he had gotten rid of Robin at that point, which left room for me!”

Venturing into a comic nerds’ den — especially one containing Hall and Rick Worley (“A Waste of Time”), two of SF’s comicus nerdii ne plus ultras — can make for a heady experience, involving intricately detailed discussions on topics as varied as copyright infringement, Tijuana Bibles, Bob Dylan vs. Roy Lichtenstein, Alfred Hitchcock’s lesbian subtexts, the evolution of the muscle daddy in popular culture, and recent scandals like that of Vertigo Comics executive editor Karen Berber’s rather abrupt departure from the DC Comics fold.

In short, in this case, a delectable mental Bat Cave full of Gotham arcana pertaining to the hoariest slash-fic topic this side of Kirk/Spock, the enduring homo subtext of the Dynamic Duo. With “Batman on Robin,” a group art show at Mission: Comics and Art opening Fri/8, Hall and Worley are displaying the works of dozens of comics artists willingly tackling the theme — and finding that beyond the Boom! Pow! Splat! of the men-in-tights 1960s camp TV classic or the suggestively archetypal narrative of brooding, rich, handsome Bruce taking in and mentoring (and, in the ’40s, even sharing a bed with) young orphaned circus hustler Dick, there are innumerable points of entry and intrepretation for queer fans.

Of course, that candy-colored, vaguely existentialist TV show does have a lot to answer for, along with its direct descendants. “I’m pretty sure I first encountered Batman when the Tim Burton movie came out in 1989,” Worley told me. “I saw a table display at a B. Dalton in a mall, and I was intrigued because it was the first time I had ever seen comic books displayed like that in a bookstore. The comics there were Grant Morrison’s Arkham Asylum and Frank Miller’s Dark Knight Returns, and my mom wouldn’t let me look at them because she said they were too dark. I would have been about seven, and in the case of those comics she was probably right. So obviously, that just made Batman all the more intriguing to me.

“The first time I actually saw something with Batman in it, though, was probably afternoon reruns of the Adam West show, and I’m pretty sure I enjoyed it because I really wanted to bang Burt Ward as Robin. The Robin costume has always been hot to me since then.”

But once Worley and Hall put out the call to other artists for their graphic interpretations of Batman-Boy Wonder relations, they were inundated by all sorts of personal takes.

“The pieces we have in our show are amazing,” Worley said. “We have paintings, like a Gustav Klimt homage by Andrew Guiyangco. We have more indie style comics. We have some more Yaoi looking-ones, a cute chibi one, one by Brad Rader in a very classic ’40s Batman illustration style, only with Robin butt-naked. We have a story of a lesbian encounter between Batwoman and Catwoman by Tana Ford, which she did with sort of JH Williams-style layouts. Justin’s doing a Batman Kama Sutra. There’s so much stuff.”

The broader history of interpretations of the Dynamic Duo’s sexuality is full of twists and turns. “I think what has changed most over time is the awareness of gay identity,” Worley said. “If you were gay in the ’40s, there was almost nothing gay available for you to see. It was exciting when you found things [in comics]. I think what’s happened in the meantime is a kind of convergence. As people don’t have to be closeted, figuring out if somebody is or isn’t gay isn’t as much a part of gay life. Now in comics, there are superheroes who are gay, you don’t have to find signs and create your own interpretations of ones who may or may not be. And if you’re a gay writer trying to include that subject matter in a comic you’re writing, you don’t have to encode it, either. But because mainstream superhero comics are dealing with characters who were created decades ago and who have been worked on by hundreds of artists, those characters have now accumulated the baggage of all those interpretations and it’s part of what is always present when they’re being used.”

Hall adds: “In his 1954 book Seduction of the Innocent, Fredrick Wertham pointed their relationship out as particularly unwholesome, and so I think it’s fair to say that ever since Robin burst onto the scene in his little green Speedo and elfin shoes, there have been suspicions about the goings on in the Bat Cave. The Batman-Robin fantasy has changed some over time, as queer relationships have become more normalized and mainstream. But many readers still have a perverse joy in finding unintended homo subtext in work like the Batman comics.”