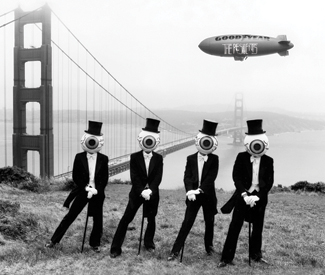 TOFU AND WHISKEY As Homer Flynn describes to me the Bay Area musical landscape during the time when iconic, experimental music-arts collective the Residents first rolled into town in 1966, I can’t help but picture a tiny gold hammer cracking the earth wide open like it was a piñata, with glitter, powdered wigs, freakish masks, oversized eyeballs, and gingerbread men spewing out in a magnificent tangle.

“A lot of what attracted the Residents to the Bay Area was the psychedelic music scene of the mid-to-late ’60s,” he says, with a pleasant Southern drawl. “What was so interesting about that era, was that it was wide open. Because the money was not as big, there was a lot more freedom.”

Flynn’s talking to me as a van carrying the current members of the Residents careens through the New Mexico desert on their first tour in two years, their 40th anniversary tour, which crawls to San Francisco on Feb. 24 (8pm, $35. Bimbo’s, 1025 Columbus, SF. www.bimbos365club.com).

Looking back at the beginning of the band’s career, he includes early FM radio as part of that equation: “FM radio was really getting its start, in terms of broad exposure, and it was wide open. You would turn on KSAN Radio at that time, [and] you could hear Mozart, the Grateful Dead, Bob Dylan, swing music. It was very eclectic, and that’s what made it interesting.”

He could be describing the Residents themselves with that last descriptor. The mysterious band (always covered in the face, often in whimsical dada-tastic costumery) might have been lured to the Bay by the psychedelia scene, but they took cues from far broader reaches of sound. There was cosmic jazz composer Sun Ra — “I mean, Sun Ra said he was from the planet Saturn.”

“There was a lot of mystery about Sun Ras…and when he spoke, everything was all poetic and enigmatic. He was a huge influence on the Residents, in terms of style and music presentation, although, they never really tried to emulate him in terms of music. But there was a lot of respect and influence.”

Musically, and composition-wise, there was influence from Captain Beefheart, more on the fringes of psychedelia, and far weirder than the acts that made it exponentially bigger by decade’s end. But the Residents have staying power — releasing 60 albums and multimedia CD-ROMs over four decades, including first single Santa Dog (1972), and milestone records like Eskimo (1979) and Freak Show (1990).

This is probably a good time to point out that we the listeners don’t exactly know who the band members are, or who Flynn is.

This much is true: the Cole Valley neighborhood resident is part of the band’s two-person management team, Cryptic Corporation. He’s also the art director who created most of their album covers, and who ushered in the concepts for the Residents’ many memorable faceless looks (specifically, and most well-known, the eyeball masks, though his original concept for that was giant silver globes).

The heavy globes were a no-go, so someone suggested eyeballs (the better to see you with).

“It was like, well if you have an eyeball, what goes with that? At this time it was still hippie to some extent. What was in for bands was sloppy and slovenly — which, of course, it still is at this time — so the idea of tuxedos they thought, that’s cool and classy. And then the top hat was just the perfect compliment to the eyeball and the tuxedo.”

He may also be in the band, and the band’s main lyricist, but claims to this day otherwise. It’s been a long debate, as to who is actually a member of the Residents, because, again, they all wear masks.

However Flynn’s connected with the group, he’s certainly been along for the journey — the Shreveport, La.-native has long been in that bumpy Residents bus, not least for this tour, the 40th anniversary special, which began a day before our conversation.

The live show this time around is a retrospective of the Residents entire career, laying out the colorful story of the band, with monologues and musical bits throughout. The show kicks off — where else? — with “Santa Dog.” Flynn says it’s meant to paint a broad and entertaining picture of the band.

To add a punctuation mark to the anniversary, the group is offering an ultimate box set: a 28 cubic-foot refrigerator containing releases from the group’s entire career, 100 different first pressings including 40 vinyl LPs, 50 CDs, DVDs, and a signature eyeball-with-top-hat mask. Asking price? A cool $100,000 to the lucky buyer.

On the road, the group is also bringing more practical merch, such as t-shirts and commemorative coins. Hopefully there’ll be plenty left at the Bimbo’s show near the end of the tour. While there will still be a couple more dates after it, Flynn considers the SF show to be the big return home.

“I’ve traveled around quite a bit, I’ve seen a lot of places that I like, I’ve never seen any place else that I’ve wanted to live. In terms of the Residents, best thing I can say is that they’ve been happy to call the Bay Area home.,” Flynn says dreamily. “I know it will feel really good to pull up in front of Bimbo’s and take all our stuff in, our well-worn crew at that point, coming to play the show.”

Are you familiar with the term “tropical grit-pop.” Neither was I, but listen to the NYC band Ghost Beach’s Modern Tongues EP, and it should all come together. Or better yet, see it live this weekend. It’s all electronic burps and yacht rock vocals, from a pop duo (possibly?) named after a Goosebumps book, with ’90s-baiting lyrics, and ’80s synth layers. With ONUINU, popscene DJs.

If you’re celebrating Mardi Gras without Big Freedia, you’re doing it wrong. Lights Down Low is bringing the New Orleans bounce queen out especially for you, the sexy people. Oh, and don’t forget to twerk. With MikeQ, Hard French DJs.

Beak> is at one once unsettling and charming; its Krautrock backbone and angular guitars create eerie, paranoid grooves, à la Silver Apples — you know the itchy, building beats — but those hushed, mumbly vocals soothe the senses. Drummer-singer Geoff Barrow, keys-guitarist Matt Williams, and bassist Billy Fuller, are all members of other bands (including Barrow’s Portishead), so they split their time between acts, but have already released two albums in the few short years they’ve been able to get together, including critically-lauded 2012 full-length, >>. And their albums are all live recorded improv sessions in the same room, which translates well to shows, making the appearances mesmerizing extensions of previous jam sessions. With Vex Ruffin, Peanut Butter Wolf.