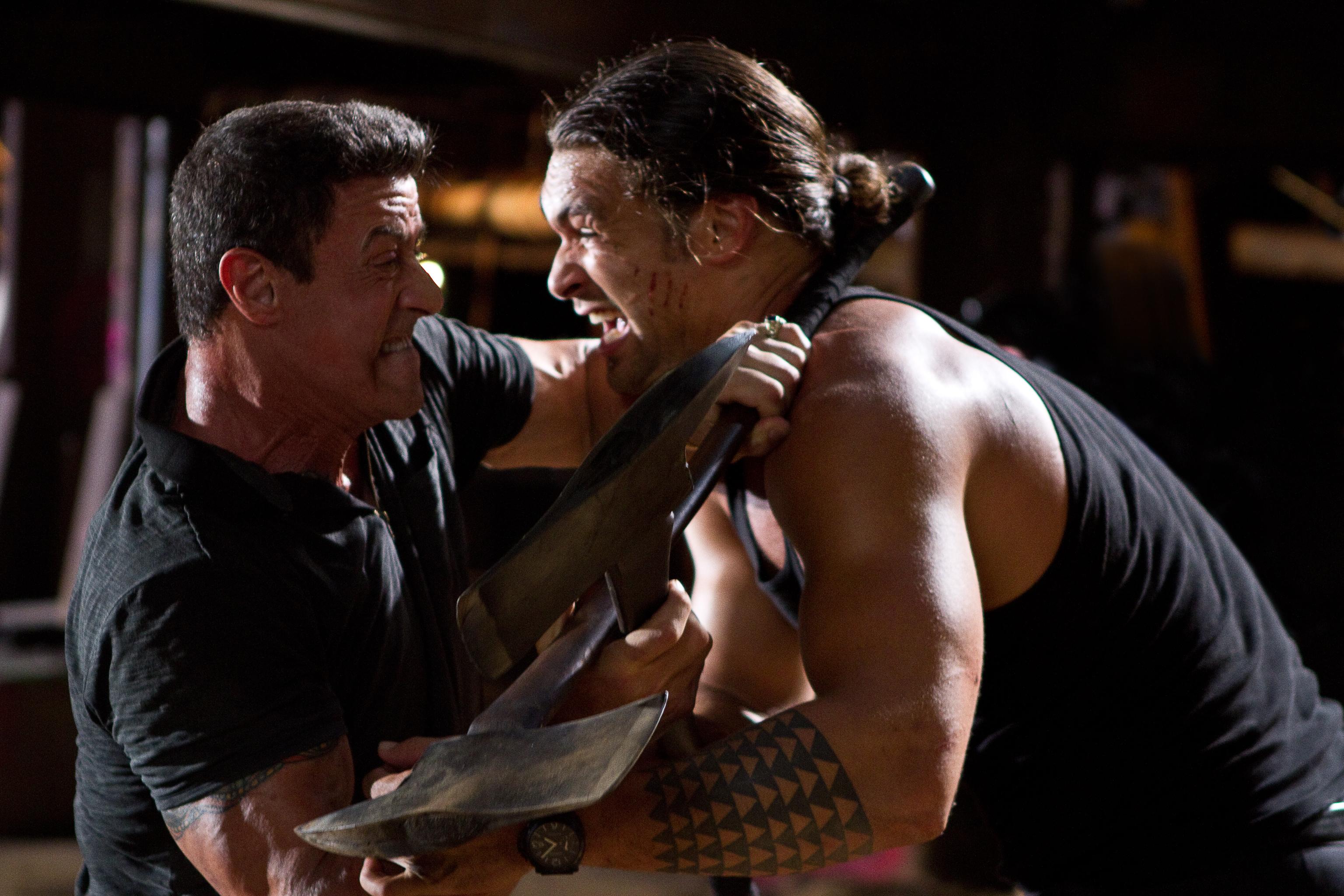 Yes you can find time to see a movie this otherwise football-y weekend. The ongoing Noir City and Sketchfest still have a lot of great upcoming programming, Sly Stallone is back in evocatively-titled action flick Bullet to the Head, a zombie finds love in Warm Bodies (review below), and all the Academy Award-nominated shorts are now available for big-screen viewing, for anyone who takes winning the office Oscar pool as seriously as … the Superbowl.

And speaking of the big game, the Roxie will be hosting its annual “Men in Tights” viewing party, a benefit for the theater and the upcoming SF IndieFest. So you can have your pigskin, and eat your popcorn too. GO NINERS!

“Oscar Nominated Short Films 2013: Animated” If you caught Wreck-It Ralph, nominated in the Best Animated Feature category, you’ve already seen John Kahrs’ Paperman, about a junior Mad Men type who bumbles through his pursuit of a lovely fellow office drone he spots on his commute. Or, if you saw Ice Age: Continental Drift, you’ve seen Maggie Simpson in The Longest Daycare, starring Homer and Marge’s wee one as she grapples with the social order at the Ayn Rand School for Tots. Among the stand-alones, Minkyu Lee’s Adam and Dog features a quick appearance by Eve, too, but the star is really the scrappy canine who gallops through prehistory playing the world’s first game of fetch with his hairy master. Two minutes is all PES (nom de screen of Adam Pesapane) needs to make Fresh Guacamole — which depicts grenades, dice, and other random objects as most unusual ingredients. The only non-US entry, UK director Timothy Reckart’s Head Over Heels, is about an elderly married couple whose relationship has deteriorated to the point where they (literally) no longer see eye to eye on anything. The program is rounded out by three more non-Oscar-nominated animated shorts: Britain’s The Gruffalo’s Child, featuring the voices of Helena Bonham Carter and Robbie Coltrane; French art-thief caper Dripped; and New Zealand’s sci-fi tale Abiogenesis. (1:28) (Cheryl Eddy)

Sound City Dave Grohl adds “documentary director” to his ever-lengthening resume with this tribute to the SoCal recording studio, where the grimy, funky décor was offset by a row of platinum records lining its hallway, marking in-house triumphs by Fleetwood Mac, Tom Petty, Cheap Trick, Neil Young, and others (even, yep, Rick Springfield). Top acts and producers (many of whom appear in the doc to dish and reminisce) were lured in by a unique recording console, installed in the early 1970s, whose legend grew with every new hit it helped engineer. Despite its reputation as a hit factory — and the attraction of its laid-back vibe and staff — old-school Sound City began to struggle once the highly-polished sound of digital technology overtook the music industry. That is, until Grohl and Nirvana recorded Nevermind there, keeping the studio alive until the unstoppable march of Pro Tools hammered the final nails in. Or did it? Sound City‘s final third follows Grohl’s purchase of the studio’s iconic console (“A piece of rock ‘n’ roll history,” he proclaims, though he installs it in a swanky refurbished space) and the recording of an album featuring luminaries from the studio’s past … plus Paul McCartney. The resulting doc is nostalgic, sure, but insider-y enough to entertain fans of classic rock, or at least anyone who’s ever sneered at a drum machine. (1:46) Roxie. (Cheryl Eddy)

Stand Up Guys Call it oldster pop, call it geriatricore, just don’t call it late for its meds. With the oncoming boomer elder explosion, we can Depends — har-dee-har-har — on the fact that action-crime thrillers-slash-comedies like 2010’s Red, 2012’s Robot and Frank, and now Stand Up Guys are just the vanguard of an imminent barrage of grumpy old pros locking and loading, grousing about their angina, and delivering wisdom with a dose of hard-won levity. As handled by onetime teen-comedy character actor Fisher Stevens, Stand Up Guys is a warm, worthy addition to that soon-to-be-well-populated pantheon. It grows on you as you spend time with it — much like the two aging reprobates at its core, Val (Al Pacino) and Doc (Christopher Walken). Val, the proverbial stand-up guy who took the fall for the rest of his gang, has just completed a 25-year-plus stint in the pen. There to meet him is his only pal, and former partner in crime, Doc, who has been leading a humble life but has one last hit to commit for their old boss Claphands (Mark Margolis), who’s inexplicably named after a Tom Waits song. Sex, drugs, and some Viagra commercial-esque bluesy guitars are in order, but first Val and Doc must find their drive, in the form of their old driver buddy Hirsch (Alan Arkin), who they break out of a rest home, and, perhaps, their moral compass, which arrives with the discovery of a victim (Vanessa Ferlito) of baddies much less couth than themselves. The pleasure comes with following these stand-up guys as they make that leap from craven self-preservation to heroism, which might seem implausible to some. But to the cast’s, and Stevens’s, credit, they make it work — and even give the sentiment-washed finale a swashbuckling buddy-movie romanticism, the kind that a young Tarantino might dislike and an older Tarantino would be loathe to begrudge his lovable louses. (1:34) (Kimberly Chun)

Warm Bodies A decade and a half of torrid, tormented vampire-human entanglements has left us accustomed to rooting for romances involving the undead and the still-alive. Some might argue, however, that no amount of pop-cultural prepping could be sufficient to get us behind a human-zombie love story for the ages. Is guzzling human blood really measurably less gross than making a meal of someone’s brains and other body parts? Somehow, yes. Recognizing this perceptual hurdle, writer-director Jonathan Levine (2011’s 50/50, 2008’s The Wackness) secures our sympathies at the outset of Warm Bodies by situating us inside the surprisingly active brain of the film’s zombie protagonist. Zombies, it turns out, have internal monologues. R (Nicholas Hoult) can only remember the first letter of his former name, but as he shambles and shuffles and slumps his way through the terminals of a postapocalyptic airport overrun by his fellow corpses (as they’re called by the film’s human population), he fills us in as best he can on the global catastrophe that’s occurred and his own ensuing existential crisis. By the time he meets not-so-cute with Julie (Teresa Palmer), a young woman whose father (John Malkovich) is commander-in-chief of the human survivors living in a walled-off city center, we’ve learned that he collects vinyl, that he has a zombie best friend, and that he doesn’t want to be like this. We may still be flinching at the thought of his and Julie’s first kiss, but we’re also kind of rooting for him. The plot gapes in places, where a tenuous logic gets trampled and gives way, but Levine’s script, adapted from a novel by Isaac Marion, is full of funny riffs on the zombie condition, which Hoult invests with a comic sweetness as his character staggers toward the land of the living. (1:37) (Lynn Rapoport)