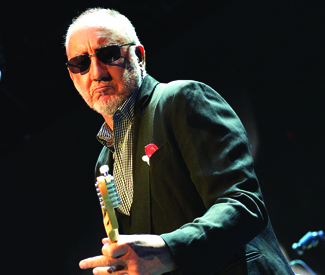 MUSIC Can dreams come true or is it all a teenage wasteland? The remains of British mod band (some prefer to call them rockers) the Who are being scraped together for the latest round of nostalgia when original members Pete Townshend and Roger Daltrey perform their second rock opera, 1973’s Quadrophenia, in its entirety at Oakland’s Oracle Arena this Fri/1.

I certainly have a soft spot for the band (despite the ’03 investigation and arrest of Townshend for accessing a child pornography website — he claimed it was for research on a book he was writing, and it was concluded that he never downloaded images), having owned its boxed-set since I was about 17. It’s doubtful this tour, which has been getting mostly positive reviews, needs any hype. After all — it’s the Who.

While ’69’s Tommy is generally regarded as its masterpiece and the standard as far as rock operas are concerned, (essayist Dave Marsh pointed out that mini operas like the Townshend-penned, “A Quick One While He’s Away” and “Rael” are their precursory “rock dramas”) the band continued this concept with a follow-up, even though the pressure of matching previous success reportedly lead to Townshend’s nervous breakdown.

Marsh’s essay The Who In America calls the introspective album a search for “where it all went wrong”: the it being an overly encompassing view of ’60s-rock stardom along with the counterculture; but at the same time, it mainly tells the story of Jimmy, the album’s protagonist, and his identity struggle (the whole violent, London mods vs. rockers thing). Still, Townshend’s self-analysis sounds majestic, but could be criticized as both vain and myopic, considering the band’s initial hits hadn’t even been around for a decade by that time.

The era bred stiff competition among bands and their contemporaries in both songwriting ability and recording technique, but also serves as a reminder that these larger-than-life artists were competing against themselves. Each album was measured against its predecessor. For a glimpse at Townshend’s fragile psyche, we could turn to one of its overshadowed albums, 1967’s The Who Sell Out.

In his book, Revolution In The Head, music critic Ian MacDonald calls Townshend “acid-inflated” during this period. He continues, saying he could barely write focused songs, much less hits. However, it was the Beatles who in 1968 were “provoked by hearing that the Who had gone all out on [its] latest track to achieve the most overwhelming racket imaginable.” This caused a paranoid reaction to outdo the Who (already notorious for impolite stage antics, i.e. toppling over Hiwatt amps, kicking over drum kits, and smashing guitars) by recording something raunchy and thrashing of their own. The result was “Helter Skelter”.

Sir Paul McCartney (widely credited as the song’s main, if not, sole composer) would reveal the Townshend track in question as “I Can See For Miles,” which ended up being a hit single. In fact, it was the only single from Sell Out, despite the album’s heavyweight melodies, intricate Beach Boys harmonies, and a maturing lyrical wit, that ranges from comedic to confessional.

“Sunrise” in particular, is the tale of profound loneliness, or at least, of a man wasting away his reality. He dreams day and night of either a lost love or of one that never existed in the first place. “Each day I spend in an echoed vision of you.”

The plucked acoustic strings throughout the song serve as metaphor for his own heavy heartstrings. He turns down the possibilities of love as he’s haunted by his visions, unable to move beyond them. When he does awake, it’s hopeless. “Then again you’ll disappear/my morning put to shame.” Singing in a haze, or in the tone of a lullaby, he fears everyday will be unfulfilling, just as the last. Meanwhile, his lament for the object of his desire consumes him.

It’s no surprise this feel-bad theme is repeated in the appropriately-titled “Melancholia” (a bonus track from the album’s reissue). The imagery couldn’t be clearer or more succinct when Daltrey and Townshend deliver a call-and-response vocal of one line in particular. Townshend taunts Daltrey in a sing-song voice posing as life itself, singing, “The sun is shining”. Daltrey, the embodiment of depression, screams out in response his tortured realization, “but not for me!”

If MacDonald was critical of Townshend’s acid phase for not producing hits, he should have listened to some of these deeper cuts for content. Unfortunately not every album had the ability to emerge from Tommy’s shadow, but the Who’s sound and focus always remained intact.