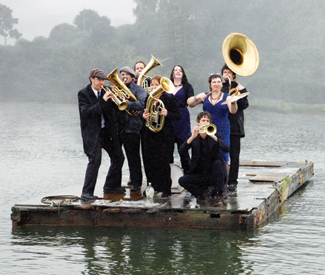 TOFU AND WHISKEY While it’ll be hard to say goodbye, Brass Menažeri’s founder Peter Jaques might have the best possible reason for dissolving his decade-old, San Francisco band. He got a Fulbright grant to study traditional Greek music — in Greece.

He’ll be traversing the Grecian island of Crete, coastal Epiros, mountainous Florina, and capitol city Athens, studying with Greek master musicians. So yeah, don’t cry for Jaques. It’ll more be the Bay Area Balkan scene’s loss than his, given the group’s influence on the local set, lo these past 12 years. (Remember that Tofu and Whiskey column on the bumping Bay Balkan scene a few weeks back? That wouldn’t have happened without it.)

With that in mind, I asked Jaques to give me the rundown on the highlights — and low points — in the life of Brass Menažeri.

There are those less-than-ideal band situations: “the sound guy who insists he needs to boost the ‘kick drum’ (we don’t have one) in a room with overwhelming bass resonance. We could hear nothing at all aside from the drum; playing an outdoor festival at Civic Center 100 feet from a techno stage; getting stiffed for a measly $200 when a venue said they’d paid our money to the other band (why?) and the other band denied it.”

And then there are the inspiring moments that kept the band humming: “collaborating with Boston MC Mr. Lif at the Seattle Folk Fest in 2010; playing for Ruth Hunter’s 50th birthday party while the sun was setting on a beachfront in Seattle; crowd surfers at Amnesia; the 2008 CD release at Great American Music Hall with Aphrodesia, and returning there for Kafana Balkan last year with Fishtank Ensemble; crowd reactions at the Sebastopol Apple Blossom Festival; chasing Rupa around the Mission during her birthday procession a few years ago; double bill Balkan brass afterparty for the Goran Bregovic show, with Inspector Gadje last year; the first Kafana Balkan at ArtSF in the Mission, with people hanging from the rafters”

So yes, you can pretty much spend your whole weekend reveling in the Balkans.

For those more interested in the scores than the moving pictures on the screen, indie rock icon — and master jazz spawn — Petra Haden has done something quite unique with her newest album, Petra Goes to the Movies, released last week on Anti-. She’s rearranged classic film scores — think Psycho, A Fistful of Dollars, Superman, and 8 1/2 — mainly using her extraordinary voice to flesh out the formerly instrumental sections. For “Psycho,” that means high, layered a capella vocals creating that haunting paranoia so associated with the film’s theme. “Goldfinger” is a fun one as it also features Haden’s sultry lyric singing, and bum-da-bum “Hand Covers Bruise” from The Social Network stands out as an unexpected new gem. “When I saw the film Social Network, I thought it was a great movie but it was the music that really drew me in,” Haden said in a statement to her record label. The former That Dog vocalist’s interpretations on this album have minimal instrumental contributions courtesy of her famous father, jazz bassist Charlie Haden, pianist Brad Mehldau, and guitarist Bill Frisell.

Experimental, ’90s-born Portland act Jackie-O Motherfucker live at Mexican restaurant Casa Sanchez, where I can also eat chips and salsa during the set? That’ll do just fine, thank you. With You Nori, Cuttle Buttle, Baus.

Ted Leibowitz has been doing Internet radio far longer than the majority of your favorite podcast hosts. His indie rock-oriented Internet radio station, BAGel Radio, is turning 10 this year. So the station founder-music director is throwing this show with local rock bands including Pixies-honoring Mister Loveless, angsty Churches, and tender Birdmonster. A lineup worth showing up early for.

It’s the end of Brass Menažeri, the 10th anniversary of BAGel Radio, and the start of Petra Haden’s foray into a capella film scores. Plus: Pussy Riot Night at City Lights!