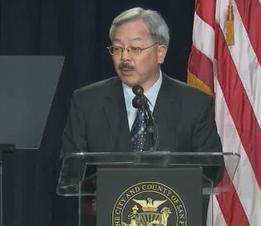 Mayor Ed Lee punctuated his State of the City speech with a nice little quip: “Every San Franciscan deserves a clean, safe place to call home.” I agree.

So why, in a speech lasting more than an hour, did the mayor not once mention that thousands of San Franciscans are facing the loss of their homes — and will be forced out of the city — because of the same policies that he’s proudly promoting?

These things are always self-congratualtory and full of the requisite bullshit. But Lee’s description of the State of the City was nothing more than a fantasy to the two-thirds of San Franciscans who live in rental housing, many of whom are living with an unacceptable level of insecurity. Much of the city’s rental stock — and the effectiveness of rent control — is at risk at speculators are buying up properties, tossing the tenants out with the Ellis Act, and converting them to tenancies in common. This is a massive civic crisis, brought on in part by the boom in tech jobs and the consequent boom in high-paid young people who want to live in a city that has virtually no vacant housing.

We saw this before, under Mayor Willie Brown; we called it the Economic Cleansing of San Francisco. It was awful, and it’s happening again.

But you wouldn’t know that to hear the mayor completely ignore the issue.

Oh, Lee gave it a toss-off line; gee, the rent is too high, but we can’t ignore the laws of supply and demand. Gee, we’re going to build 45,000 new housing units, and that will fix everything.

But Lee, of all people, ought to know that housing in San Francisco has never followed the laws of supply and demand. This is a highly irregular market, because demand is essentially unlimited. Housing fills us as fast as you build it. And none of the new housing that’s currently under construction or in the pipeline will be affordable to current SF residents who live in rent-controlled units and are at risk for eviction.

When you’re evicted under the Ellis Act in San Francisco today, to make room for someone with more money, you wind up having to leave the city. That’s the bottom line. And everywhere you turn, tenants are facing that ugly prospect.

The mayor spent much of his time talking about jobs. That’s fine; he’s proud that the unemployment rate in the city has fallen to 6.5 percent, but he insists he won’t rest until everyone has a job. Actually, most economists would say that’s impossible; capitalism, by its nature, exists with a structural unemployment rate that rarely falls below 4 percent. In fact, 4 percent is generally considered “full employment.”

More important, the overall rate is 6.5 percent, but it’s way higher for people without college degrees, for youth, and for African Americans. (It’s above 50 percent for transgender people.) The tech boom isn’t providing jobs for all of the unemployed current San Francisco residents; a lot of the jobs are going to people who don’t live here and are moving here for employment. They are putting pressure on the existing housing stock. That always leads to displacement.

None of this is to say that tech jobs are bad or that we shouldn’t have companies that pay high wages locate in San Francisco. What it means is that the city first has to protect its existing vulnerable populations — and that’s not happening.

I would encourage Mayor Lee to talk to the Housing Rights Committee, or the Tenderloin Housing Clinic, or any of the other tenant lawyers who are fighting desperately every day to state off evictions. He’d get a very different picture of the state of the city.