Home Our freak of a governor
WriterTim Redmond
SectionPolitics Blog 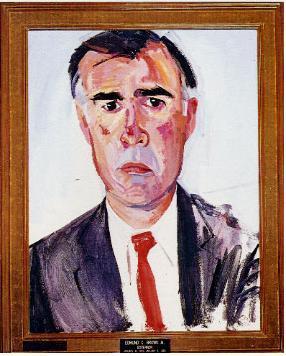 We all know this, but I have to say it again: Jerry Brown is one strange agent.

His State of the State address was blessedly short: Jer doesn’t waste a lot of time. In fact, a few minutes in, the crowd in the state Assembly chambers was applauding for the second or third time, and he told them to stop; “this is my longest speech and we’re not going to get out of here.” I clocked it, applause and all, at about 16 minutes.

But lordy, lordy, what a crazy amalgam of stuff he packed in. From Montaigne to the Little Engine that Could, the Ten Commandments to Pharoh’s dream about the seven cows, Franklin Roosevelt to Gaspar Portola … all over the map would be a gentle way of describing it.

And that was the political message, too: We can do great things, spend billions on a massive underground peripheral canal and high-speed rail — but we can’t backfill the cuts that are leaving tens of thousands in poverty because we have to live within our means. The mandate for renewable energy is great, but we shouldn’t just keep on passing laws:

Constantly expanding the coercive power of government by adding each year so many minute prescriptions to our already detailed and turgid legal system overshadows other aspects of public service. Individual creativity and direct leadership must also play a part. We do this, not by commanding thou shalt or thou shalt not through a new law but by tapping into the persuasive power that can inspire and organize people. Lay the Ten Commandments next to the California Education code and you will see how far we have diverged in approach and in content from that which forms the basis of our legal system.

Serious, Guv? “Constantly expanding the coervice power of government?” That’s channelling your inner Ronald Reagan, no? Oh, and weren’t you the mayor of Oakland who let the cops do pretty much anything they wanted in the name of public safety — and who is the darling and best pal of the prison guards union? Talk about the coercive power of government. And one of the bills you’ve never supported is Assemblymember Tom Ammiano’s effort to legalize marijuana — eliminating a particularly troubling “coercive power of government” — because you’re worried that we can’t compete with China if everybody’s stoned.

I like high-speed rail, and investing in education, and I agree that there’s too much emphasis on one-size-fits-all standardized tests and measurement tools in the public school system. The school funding formula is, generally, a good idea. And I am utterly on the side of our tightwad leader in the battle to keep tuition from rising at CSU and UC.

So on some of the substance, Brown’s speech made sense. But I’ve been a Jerry watcher for many, many years, and he never ceases to baffle me. I supose that’s part of his point.

Let’s remember: Brown grew up in a wealthy patrician family, and he’s never had to worry about working for a living or finding an affordable place to live. He’s way out of touch with what millions of Californians face every day — and that’s why it’s easy for him to sit up in Sacramento and talk about “living within our means.”