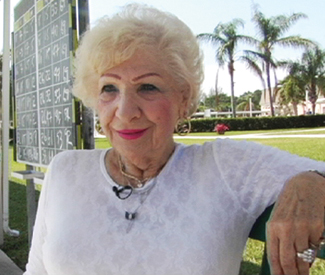 FILM Film editor Sari Gilman — her resume includes 2007’s Ghosts of Abu Ghraib and 2002’s Blue Vinyl — made her directorial debut with the 30-minute documentary Kings Point, a bittersweet exploration of a Florida retirement community. The film first screened locally as part of the 2012 San Francisco Jewish Film Festival, and will air on HBO in March. In the meantime, it’s been nominated for an Oscar for Best Documentary Short. I caught up with Gilman to talk about her film — and little gold men.

San Francisco Bay Guardian Congratulations on your nomination! You knew your film was on the shortlist, but were you surprised when you made the final cut?

Sari Gilman Thank you! You know, I had no idea. I have worked very hard in my life to try not to predict the future. [Laughs.] I was very happy when I found out, but I don’t think it would have destroyed me if it hadn’t happened. Obviously, though, it’s a total thrill and a complete honor, and more than I ever expected when I started making this movie.

SFBG Do you get to, like, walk the red carpet?

SG I do! I gotta get a dress! I mean, not that anyone’s going to care who I’m wearing, but for me, it’ll be fun.

SFBG What’s your connection to Kings Point, the place, and what made you want to create a documentary about it?

SG My grandmother moved to the community in 1978, when I was about nine years old. I visited her there many times a year for 30 years. About 15 years in, I was starting to get involved in storytelling and still photography, and I was always really fascinated with the place on a couple of different levels: socially, it sort of seemed like it was a summer camp for old people, and then visually — it’s 7500 identical one- and two-bedroom condominium units, spread out over miles. So there’s a lot of architectural homogeneity. These long hallways that look exactly the same, with these palm-tree shadows on them. It seemed like a natural place to start exploring.

SFBG Since you knew the residents already, was it easier to get them to open up in interviews?

SG I think so. None of the subjects in the final film were people that I knew personally before I started making it, but some of them did know my grandmother, and they all knew me as the granddaughter of someone who lived there. I think that’s what made it easy for them to talk to me. I also shared a lot with them about my grandmother’s experience and my experience there, so the interviews weren’t so much interviews as they were conversations. Obviously, we cut my voice out in most cases, but I think that I was able to get the kind of candid stories that I got because I was on the other end of the camera talking to them.

SFBG Though you’ve worked extensively as an editor on other people’s films, you didn’t edit Kings Point. Why was that?

SG As an editor, I knew how badly I needed an editor. I know that directors need to have a collaborator to provide perspective, and look at the footage with a little more of an objective eye. I got incredibly lucky in that I was able to hire Jeffrey Friedman [co-director, with Rob Epstein, of 2010’s Howl and 1995’s The Celluloid Closet, among others], who is a local luminary and an amazing filmmaker who edits occasionally. He was actually my mentor when I was learning how to edit in the 1990s in San Francisco, so working with him on my first film was a really great experience.

SFBG The tone of the film is unique in the way that it balances light-hearted moments with the sort of sad undertone that runs throughout.

SG That was the biggest challenge. I knew there was going to be sadness and darkness, and humor and lightness, and I had a sense of what I wanted that to be, but I knew from the beginning that it would be hard to achieve. Jeffrey and I spent a lot of time achieving the tone. It was kind of like salt and sugar — “A little sprinkle here, oh, now it’s too dark, let’s add more of the other.” The feeling that I wanted to evoke, more than anything, was that certain feeling that I had when I was visiting there.

SFBG Had you always intended for Kings Point to be a short film?

SG No, I actually intended it to be a feature. It was in the cutting room that we decided to make it a short. A large part of that was because of the tone, actually — we had enough story to keep it going, but the tone of those stories were shifting the film in a direction that I wasn’t comfortable with. It was a little more of that “cute old person” movie. Kitschy, kind of, “Look at the old people doing belly dancing,” or whatever.

I was extremely sensitive to the fact that most people, when they heard about the film, would think that’s what they were going to be seeing. I was a little crazy-determined not to make that movie, because that wasn’t what my experience was. That’s not what I saw. In cutting it down, we got rid of a lot of the lighter stuff, which is what helped us achieve the tone that we did.

SFBG There have been several films with themes about aging lately: Amour, Quartet, and The Best Exotic Marigold Hotel (all 2012) come to mind. Why do you think that is?

SG Oh, I definitely want to see Amour. I think it’s a moment whose time has come. As a population, the baby boomers have now started to retire, and in the next 20 years, we are going to see a major shift in the demographics of this country. There will be many, many more elderly than there are now. I think that people are starting to think about aging issues in a new way.

I truly hope Kings Point will encourage people to have those kinds of discussions. Nobody likes to grow old or think about what’s going to happen, but the truth is that we kind of need to. There’s a bit of a denial about the realities of aging; there’s so much emphasis placed on being independent, self-reliant, and remaining active. On the cover of AARP Magazine, you always see pictures of, like, 75-year-olds on bicycles riding to the beach. And that’s great, and everyone wants that to be their experience, but not everyone is so lucky. *