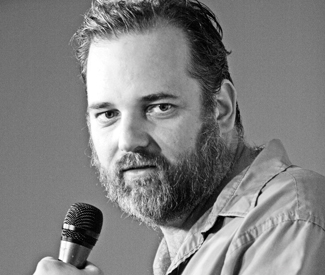 THEATER Dan Harmon, performing at this year’s SF Sketchfest, is on the phone, talking about therapy. He’s explaining his belief that a person can find a mental illness for anything they can name, with some fetishistic examples. “There are people out there who like to be walked on,” the creator and former show runner of NBC’s Community says. “There’s people who like to eat human fecal matter. There’s people who want to have sex with kites.”

“Hold on, Dan. Are there really?” I ask, making a note to Google it later.

“I guarantee it. I promise you. There are six billion people in the world and there’s gotta be someone who wants to have sex with a kite. But I don’t know if you’d ever find someone that craves the feeling of being alone.”

We’re on the subject because of Harmontown, the comedy show-town hall meeting-podcast Harmon regularly holds in the back of an LA comic shop, based around “one day forming a colony of like-minded misfits.” Harmon’s about to take the show on a daunting cross-country tour, that will stop in SF for Sketchfest before returning to LA. It’s been eight months since Harmon was unceremoniously fired from the much-analyzed, but little-watched sitcom Community by Sony, and had a public feud with actor Chevy Chase that brought a TMZ level of public scrutiny. Subsequently, the Harmontown episodes have frequently taken on the air of a psychiatric session, with the audience filling an important role.

“The whole point of therapy is the therapist doesn’t particularly matter. You’re listening to yourself talk and I think some people are more comfortable talking to one guy holding a clipboard if they’re going to say ‘Hey, I put a Sharpie pen up my ass the other day, does that make me a pervert?’ I feel weirder saying that to one guy with a masters degree and a tiny office who doesn’t laugh than I do telling it to eight people in the back of a comic book store. It feels healthier to do the latter.”

Harmon doesn’t hold much back; after all, this is a guy that earlier in his career broke ground (and insert obvious pun here) with the self-explanatory “Laser Fart” web series for the no-budget, no restrictions, faux-TV network/film festival, Channel101.com (which he co-founded.) A performer only as a hobby, a “self-destructive writer” by trade, there’s no stand-up at Harmontown and ideally little planning. Instead, alcohol-enabled improv and tangents can lead to talking about being hit with a belt by his father, getting dangerously close to breaking up with frequent guest and girlfriend Erin McGathy on stage, or having Ricki Lake Show-styled heart-to-hearts with the audience.

It could be alienating, but Harmon’s uproarious logic, perspective, and self-awareness (an overabundance of which has caused his work to frequently be deemed “meta”) has gained him a following. “Where I tend to go,” says Harmon, “I tend to start asking the question ‘Am I a good person? Am I a good person?’ over and over again, and a kind of family forms around me. Or everyone else gets repelled.”

Channel101.com was at one time the focal point for this quasi-family. “It was like a barn raising, a church, something we did each month,” recalls Harmon. “We had a thing that we did and a belief system, and that was definitely something that I craved and wanted.” But as Community took over his life for three years, Harmon no longer could make the monthly films required, and moved into a fatherly rather than brotherly role.

Harmontown‘s filled that space, in a culty sort of way, with white-boy freestyle raps and live Dungeons and Dragons. The show tends to draw out bright millennials, eager Aspergians, and closeted creatives who find Harmon’s neuroses at least amusing but more often inspiring (also: nerds). It’s a mix that suit-wearing co-host Jeff B. Davis (Whose Line Is It Anyway?) best termed a “mutual anxiety association.” Harmontown isn’t meant for everybody. But that’s clearly by design. And as he hits the road with the show, Harmon’s looking for his people.