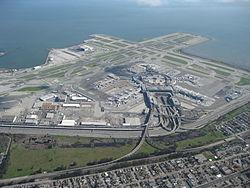 It must have been hard for John Diaz, the Chron’s editorial page editor, to just come out and oppose the idea of renaming San Francisco International Airport for Harvey Milk. So instead he put out a tortured argument that goes like this:

It’s too easy to put things on the ballot in San Francisco. To wit:

San Francisco has a system that is ripe for abuse by politicians who want to call attention to themselves or want to try to acquire at the ballot box what they could not otherwise attain by working with their colleagues.

He actually quotes Lite Guv Gavin Newsom who says, apparently without blushing, that he went to “excrutiating lenghts” to avoid putting things on the ballot that he couldn’t get passed through the Board of Supervisors. Excuse me? Care Not Cash? WiFi?

The renaming of SFO is an example of an issue that demands a thorough public airing: about its cost, about the implication for the airport’s global brand and about whether other San Franciscans should be considered. The regrettable upshot of the Harvey Milk San Francisco International Airport proposal is that it could devolve into a referendum on the late supervisor’s worthiness for such an honor.

Wait: You don’t think the supervisors will discuss this, that there won’t be public comment, that this proposed city charter amendment won’t go to committee for discussion? You don’t think that’s already happenning, or that a ballot campaign won’t involve all of those issues? That’s just silly.

Yeah, there have been things put on the ballot in the past without adequate hearings, but that’s certainly not the case here. This thing will be discussed and dissected and cost-analyzed and debated at great length. And in the end, it ought to go on the ballot. The Diaz argument is just an excuse to oppose something that’s hard to fight on the merits; if the supes had just gone ahead and done it on their own, we’d be hearing the opposite, that the voters need to weigh in.

There may be a time when an airport naming makes perfect sense, perhaps because of a San Franciscan’s contribution to the airport itself or aviation generally. Harvey Milk simply does not offer such a natural connection.

Please. John F. Kennedy may have sent a man to the moon, but had nothing substantive to do with New York City aviation. Ronald Reagan didn’t even fly into National Airport; Air Force One lands at Andrews Air Force Base. And his major contribution to civilian aviation was firing all the air traffic controllers and breaking their union.

Naming SFO after Milk would be a political statement on a grand scale. The City and County of San Francisco would be saying that a gay person deserves a monument of international scale, that Milk’s contributions to changing the world are something this city should treat as so special that we should tell the whole world, loudly and forever.

I’m all for it. But if you’re not, let’s at least debate it on the merits