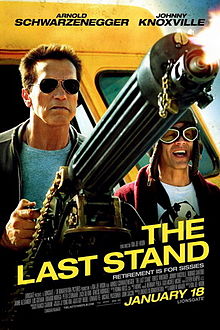 Get to the theatah! California’s (thankfully, former) Governor returns to the multiplex to do what he does best: speak in one-liners and carry a big gun. My review of The Last Stand below the jump, along with short takes on the Mark Wahlberg-Russell Crowe crime drama Broken City, and more.

Broken City Catherine Zeta-Jones’ measured performance and killer wardrobe run away with this uneven political thriller about a made-up Manhattan with real(-ish) problems. Russell Crowe is only slightly improving his record post-Les Mis, as he plays another harried and morally confused agent “for the people.” Here, he’s Mayor Hostetler, a swaggering politico with fingers in New York’s real estate cookie jar and the sort of “get shit done” directive that results in bodies lying in NYC’s overfilled gutters. Good thing he has Mark Wahlberg in his back pocket, a cop who slipped a murder wrap and now scrapes the bottom for gigs as a private detective. Seven years ago Billy Taggart (Wahlberg) was seeking vigilante justice for the victim of a rape-murder in the city’s biggest ghetto. The victim became a household name but the killer was let off, leading to cries about the validity of NY’s justice system and to allusions to the Central Park Five. Broken City is less about a broken City and more about broken Men, and there are certain elements that seem too subtle for a story built on such bald-faced and predictable strategy. Between a script that’s struggling to demonstrate moral compromise and integrity, and direction (by Allen Hughes) that’s as sensitive to nuance as a border collie, it’s hard to find much beyond Zeta-Jones’ shoe stylings to admire. (1:49) (Sara Maria Vizcarrondo)

The Last Stand With gun control issues dominating the news, what better time to release a movie that lovingly glorifies the wonders of excessive firepower? Fortunately for star Arnold Schwarzenegger, making his return to leading-man status after that little fling with politics, The Last Stand is stupidly enjoyable enough to make any such PC-minded realizations relatively fleeing ones. When a Mexican drug lord (who also happens to be an expert race-car driver) escapes from federal custody and begins speeding home in a super-Corvette, the lead FBI agent (Forest Whitaker, slumming big-time) realizes his only hope is a teeny Arizona border town that happens to be overseen by Sheriff Schwarzenegger. (Other residents include a couple of hapless deputies; an Iraq war vet; and a gun nut played by a cartoonishly obnoxious Johnny Knoxville.) Can this ragtag crew hold off first the drug lord’s advance team (led by a swaggering Peter Stormare), and then the head baddie himself? Duh. The biggest surprise The Last Stand offers is that it’s actually pretty fun — no doubt thanks to the combo of Korean director Kim Jee-woon (2008’s eccentric The Good, The Bad, and the Weird; 2003’s spooky A Tale of Two Sisters) and the heft of Schwarzenegger’s still-potent charisma. (1:47) (Cheryl Eddy)

The Law in These Parts Ra’anan Alexandrowicz’s documentary is a rather extraordinary historical record: he interviews numerous retired Israeli judges and lawyers who shaped and enforced the country’s legal positions as occupiers of Palestinian land and “temporary guardians” of a Palestinian populace living under foreign occupation. The key word there is “temporary” — in using here a different (military rather than civil) justice from the one Israeli citizens experience, Israel has been able to exert the extraordinary powers of an invading force in wartime. But what is “temporary” about an occupation that’s now lasted nearly 45 years? How can the state justify (under Geneva Convention rules, for one thing) building permanent Jewish settlements that now house about half a million Israelis on land that is as yet not legally Israel’s? By constantly changing the terms and laws of occupation, they do just that. If many policies have been perhaps necessary to control terrorist attacks, one can argue that they and other policies have created the climate in which oppositional fervor and terroristic acts were bound to flourish. That, of course, is a political-ethical judgement far beyond the public purview of the judges and others here, whose dry legalese admits no personal culpability — and indeed sometimes seems almost absurdly divorced from real-world ethics and consequence, which of course serves an increasingly rigid governmental stance just fine. Without preaching, The Law in These Parts raises a number of discomfiting questions about bending law to suit an agenda that in any other context would seem frankly unlawful. (1:40) Roxie. (Dennis Harvey)

Let Fury Have the Hour Though its message — that creative expression is a powerful, meaningful way to fight oppression — is a valuable one, Antonino D’Ambrosio’s Let Fury Have the Hour covers turf well-trod for anyone who has ever seen a documentary about punk rock and social justice. (Especially when it contains usual suspects like Ian MacKaye, Shepard Fairey, and Billy Bragg waxing nostalgic about how nonconformist they were in the 1980s.) In truth, Fury is more collage than doc, pasting together talking-head interviews (also here: Chuck D, John Sayles, Van Jones, Tom Morello, Boots Riley, and Wayne Kramer, plus a few token women, chiefly Eve Ensler) with a mish-mash of sepia-toned stock footage that more or less thematically compliments what’s being discussed at the time. A more focused examination of D’Ambrosio’s thesis might have resulted in a more effective film — like, say, an in-depth look at how Sayles’ politically-themed films (here, he reads from the script for 1987’s Matewan in a frustratingly brief segment) are echoed in works by contemporary artists and citizen journalists, particularly now that the internet has opened up a global platform for protest films. Listen: I admire what the film is trying to do. I am OK with watching yet another doc that contains the phrase “Punk rock politicized me.” But with too much lip service and precious little depth, Fury‘s fury ends up feeling a bit diluted. (1:40) Balboa. (Cheryl Eddy)

LUV Baltimore native Sheldon Candis drew from his own childhood for this coming-of-age tale, which takes place in a single day as 11-year-old “little man” Woody (Michael Rainey Jr.) tags along with his uncle, Vincent (Common), recently out of jail and rapidly heading back down the criminal path. With both parents out of the picture, Woody’s been raised by his grandmother (Lonette McKee), so he idolizes Vincent even though it’s soon clear the short-tempered man is no hero. Of course, things go horribly awry, bloody lessons are learned, tears are shed, etc. Despite the story’s autobiographical origins, the passable LUV suffers greatly by inviting comparisons to The Wire — the definitive docudrama examining drug crime in Baltimore. Most blatantly, sprinkled into an all-star cast (Dennis Haysbert, Danny Glover, Charles S. Dutton) are supporting characters played by Wire icons Michael K. “Omar” Williams (as a cop) and Anwan “Slim Charles” Glover (as a meaner Slim Charles, basically). Perhaps if you’ve never seen the show this wouldn’t be distracting — but if that’s the case, you should really be watching The Wire instead of LUV anyway. (1:34) (Cheryl Eddy)

The Rabbi’s Cat A rabbi, a Muslim musician, two Russians (a Jew and a boozy Christian), and two talking animals hop into an antique Citroën for a road trip across Africa. No, it’s not the set-up for a joke; it’s the premise for this charming animated film, adapted from Joann Sfar’s graphic novel (the author co-directs with Antoine Delesvaux). In 1930s Algiers, a rabbi’s pet cat suddenly develops the ability to talk — and read and write, by the way — and wastes no time in sharing opinions, particularly when it comes to religion (“God is just a comforting invention!”) When a crate full of Russian prayer books — and one handsome artist — arrives at the rabbi’s house, man and cat are drawn into the refugee’s search for an Ethiopian city populated by African Jews. Though it’s not suitable for younger kids (there’s kitty mating, and a few bursts of surprising violence) or diehard Tintin fans (thanks to a randomly cranky spoof of the character), The Rabbi’s Cat is a lushly illustrated, witty tale of cross-cultural clashes and connections. Rockin’ soundtrack, too. (1:29) (Cheryl Eddy)