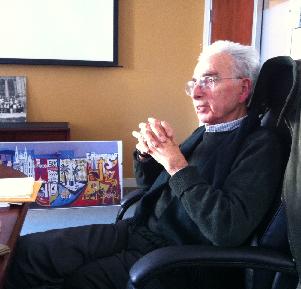 Rudy Nothenberg, who ran Muni and the city’s water system, was chief administrative officer, negotiated the deal for the Giants ballpark, and served under six San Francisco mayors, stopped by the office last week to talk to us about the Warriors Arena. We’ve had our fights with Nothenberg (as we would with anyone who was that close to Willie Brown and Dianne Feinstein) but the guy knows more about City Hall, public works, private development, and infrastructure finance than almost anyone alive. So we were happy to hear what he had to say.

Let’s be clear, here: Nothenberg lives near where the arena is slated to be built, and, as he was quick to tell us, he doesn’t want it in his backyard. But he also presented a compelling case that San Francisco is getting ripped off. And he had a few pointed things to say about the lack of negotiating skills among the members of Mayor Ed Lee’s administration.

Back when Nothenberg was talking to the Giants about a stadium at Third and King — at that point a district of dilapidated and underused warehouses — always kept a card in his back pocket. “I always knew that if things didn’t work out and we didn’t build the stadium, that would be okay too,” he said. In other words: You can’t get a good deal if you’re not prepared to walk away. And when it comes to the Warriors proposal, the mayor has made it so clear that this is his legacy that the team knows the city will never walk away. So one side of the talks can demand pretty much anything, and the other side has no leverage.

Oh, and it doesn’t hurt that just about every development lawyer, political consultant, and lobbyist in town is already working on the project. “They have co-opted everyone,” Nothenberg — no stranger to the dark side of politics — told us.

The exact terms of the deal are still not public, which is a bit odd since the city has already started its environmental review. (Can you really do an environmental impact report on a project when you don’t know what the project actually is? Two difference state courts have come to opposite conclusions, so for now the answer is: maybe.)

But there’s enough information out there for Nothenberg to give us a basic rundown on the financing — and it doesn’t look good. “The Port is really not getting anything out of the deal,” he said. The city will get some increased sales and business taxes, and the Warriors will have to pay housing and transit fees. But there won’t be a lot of new property tax revenue, since that will all go to pay for the arena.

Here’s how Nothenberg laid out his analysis:

The Warriors have to spend $120 million to replace Piers 30-32. (Costs a lot to build such a huge structure over the water.) To make the team whole, the city will sell the Warriors a seawall lot on the other side of the Embarcadero for $30 million, then give the $30 million right back to the team. Then the city will set up an Infrastructure Finance District — the 2013 equivalent of a redevelopment agency — use the future tax increments to fund a $50 million bond. The Warriors get the bond money; the city pays it back. Oh, and then the city gives the team $30 million worth of rent credits, meaning the Warriors will probably never pay any rent at all for the use of that public property. And to make it sweeter, San Francisco will pay the Warriors 13 percent interest on the rent-credit money.

Meanwhile, the local taxpayers will have to come up with a huge amount of money to increase Muni capacity, since the existing transit can’t possibly handle the load of the new arena. Yes, the Warriors, like any developer, will have to pay a modest transit impact fee — “but it’s laughable to thing that this will ever cover the capital and operating costs,” Nothenberg said.

To summarize: The wealthy owners of a professional sports team will get free waterfront land to build an immensely valuable new arena. The city will pay to bring the fans there and get them home, deal with the traffic impacts — and get almost nothing in return.