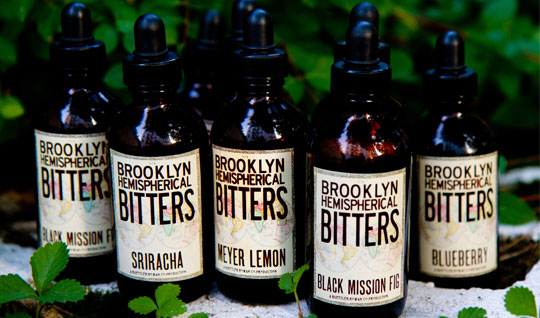 Ringing in the new year is all about celebratory imbibing, but the sometimes dreary days of January likewise call for a cheering pour. It’s a month of planning towards a new year, reaching out for fresh horizons… good reasons to have something quality in the glass, whatever the category. Here are a few worthy bottles, from sake, wine, whisky, even cocktail bitters.

Medicinal and mixable, the glut of bitters released the last few years has all but assured oversaturation. But Brooklyn Hemispherical Bitters ($21 per bottle) stands out. Made in Brooklyn, the focus is on seasonal flavors like popular Meyer lemon, rhubarb or Sriracha. Heat radiates from their savory-sweet blackberry mole or spicy charred pineapple bitters, or a brisk, bitter chill from Icelandic bitters. These are some of the more inventive, elegant bitters on the market.

A couple additional stand-out bitter flavors: The Bitter End’s vibrant curry bitters ($24) made in Sante Fe and put to perfect use by  Mike Ryan at Sable Kitchen and Bar in Chicago in his Short Circuit cocktail with cachaca, manzanilla sherry and Kalani coconut liqueur. From Canada, Bittered Sling’s plum root beer evokes a sweet sarsaparilla.

Nikka Whiskey is blessedly and finally distributed in the US through San Francisco’s Anchor Distilling, just releasing two new Nikka imports – hopefully many more to come. My favorite of the two, Yoichi Single Malt ($129), is a splurge-worthy, 15 year old whisky distilled on the island of Hokkaido from pot stills heated with finely powdered natural coal, a rare traditional method. Though more akin to a Highland-style Scotch, it nods to Islay with a hint of peat alongside a balanced brightness. On the more affordable side is Taketsuru Pure Malt ($69.99): a 12 year pure malt whisky blended in vats from Yoichi and Miyagikyo distilleries. The mountain air and river water humidity of the northern Honshu region where Miyagikyo is produced adds silky, ripe pear dimensions.

This November’s Single Malt and Scotch Whisky Extravaganza in San Francisco (held in 13 major markets), offered tastings of expected Scotches. A few special drams were the fabulous Scotch Malt Whisky Society‘s 8 year Ardbeg Cask No. 33.113, a salty, smoky Scotch young with exotic fruit. The Single Malts’ Auchriosk 20 year Scotch exhibits tropical vividness, though a classic beauty. It was a joy to taste The Balvenie Tun 1401/Batch #6, the youngest whisky in its blend being over 20 yrs old. This rarity expresses layers of fruit, vanilla and spice, lively despite age.

Sake produced in a town outside Portland? SakeOne is a range of affordable sakes (those mentioned below $13-15)  made from rice grown nearby in Sacramento, CA. There’s Momokawa organic sakes, like a clean Junmai Ginjo or creamy Pearl Sake redolent of banana and coconut, or the smooth, balanced G Joy Sake.

Despite low quality bottled sangria you may have tried before, Eppa (found at Bay Area Whole Foods and numerous shops across the country, $12 a bottle) is a refreshing mix of pomegranate, acai, blueberry and blood orange juices with Mendocino Cabernet and Syrah. Trying it chilled over fresh cut fruit this holiday season with family, it tastes homemade,  lush and dark, not too sweet, but just right.

It was the best year yet at the San Francisco Indy Spirits Expo http://www.indyspiritsexpo.com/ this November. A number of newcomers merely await West Coast distribution but are available online. With a slew of “craft” tonics released lately, each using real cinchona bark (quinine) without the natural color removed, Tomr’s Tonic is one of the better I’ve tasted. 100% organic and made in New Jersey, Tom Richter’s lively tonic combines citrus, herbs, cane sugar, with cinchona. The tonic mixes beautifully with a number of gins I sampled it with at home.

Fabrizia Limoncello is produced in New Hampshire with California and South American citrus by two Italian-American brothers. Balanced, fresh, tart (unlike their sweet Blood Orange liqueur), this limoncello is a step up from most. SW4 London Dry Gin, produced in the Clapham neighborhood of London and imported through Luxe Vintages in Florida, is a smooth, solid gin made from 12 botanicals, including lemon peel and cassia.

Craving the sparkling especially at this time of year? Two great value bottles ($15 each) are Nino Franco’s Rustico Prosecco, dry yet lively, clean and tight, and Coppo’s Moscato d’Asti  from Piedmont, Italy, its vivd effervescence cutting through intense sweetness, vibrant with brunch or spicy food. For after-dinner dessert wine, Donnafugata’s “Ben Rye” ($45 for half bottle) from Sicily, gives off a rich, raisin-like hue in the glass, made of Zibibbo grapes from the island of Pantelleria. To taste it’s lushly elegant, with a balanced sweetness and nuttiness.

At an industry tasting this fall with Sommelier David Lynch at his restaurant St. Vincent, we explored wines of the fascinating, warm-weather Consorzio Tutela Morellino Di Scansano region of southernmost Tuscany (established as a D.O.C.G. in 2007). I learned the region requires its wines be made with a minimum of 85% Sangiovese grapes. A 2010 Tenuta Pietramora di Collefagiano stood out, unusual at 100% Sangiovese. Its pleasantly funky nose gave way to cherry, even chocolate/earthy notes, balanced by soft acidity.