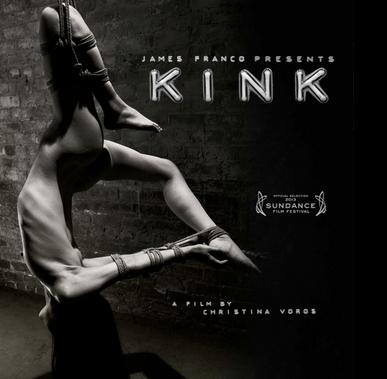 1. The trailer for Franco’s documentary on Kink.com, helpfully titled kink, came out yesterday. It features bound musclemen and bos-say female directors.We’re glad that we’re not the only ones who can’t get enough of the sex-positive culture housed within the Armory’s brick walls. Peter Acworth, who started the site out of a Columbia University business school dorm room, just wrote a rad op-ed on why the larger world should know about the work his company does.

But try as he may, Franco will never be as freaky as you guys, the entrenched sexy people of SF. That being said, here’s some sex events to watch out for:

It’s hard to put our love for this SoMa fashion-fetish-floor party, but we’ll try. Drag-DJ-diva stylings by Juanita More, pants-free lewks by host Walter Gomez, bondage demos, free porkrinds, BJ rumors on the back porch, hot go-gos, and cheap drinks. Come to think of it, it’s all cheap (except the kink couture, that shit is spendy.) All told, a night to not remember!

Celebrate her new citizenship with pansexual playground Mission Control’s queen Polly Superstar? Here, we’ll let her talk you into it herself: “‘I’m so HARD just thinking about the upcoming STAR-SPANGLED SHENANIGANS it makes me pop-in BEST OF GIRLS GONE WILD on the dashboard dvd player, blast some GARTH, plow my HUMMER through a endangered habitat and spill PABST all over myself!”

Bondage deities Midori and DeLano want to take you on a two-day tour of rope mastery, and we say: let them. The weekend course covers knots basic to advanced, the psychology of rope domination and submission, problem solving skills, rope suspension, and continental breakfast. Invite us over after?

Can we get a little activist-y for a second? Enough of the political right being the only ones who can invoke spirituality in the battle over reproductive health. The right to control our own bodies is just as deserving of praise by any denomination, and in honor of that fact the Unitarian Universalist Association is kicking off a campaign for congregational study and action on reproductive rights. The kick-off is tonight, with an evening of testifying and singing about the impact that Roe v. Wade’s historic decision had on our lives.

Because sometimes you just want a lil’ company. SF Jacks has been around for decades — check out the group’s first newsletter from 1983 — holding parties where gay men can wank (or fap, for you Y2K babies) comfortably in the presence of like-minded individuals. The group meets every second and fourth Monday of the month at the Center for Sex and Culture, if you’re into it.