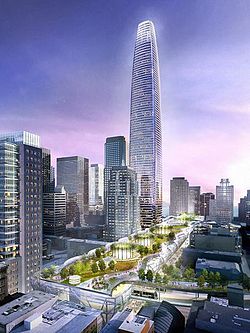 Times in San Francisco have changed since the battles in the ‘80s against increased high-rise development and the “Manhattanization of San Francisco,” which peaked in 1986 with the passage of Prop. M placing limits on the rapid development pushed by then-Mayor Dianne Feinstein and her downtown allies.

Now, in 2012, the tallest building on the West Coast — Transbay Tower, the first in a series of new high-rises envisioned for downtown — gathered its final approvals with only scattered opposition (such as Quentin Kopp, the former judge and legislator, who derides the project as nothing but a “real estate scheme” involving lucrative publicly owned land being turned over private developers).

Whether we were all too distracted by a year of political scandals real and contrived, or whether it was the project proponents’ savvy marriage of the real estate deal to the high-speed rail project and Caltrain extension that environmentalists want to see become a reality, this behemoth building is now all but a done-deal.

Yet despite the slick and compelling interactive videos and project descriptions on the Transit Joint Powers Authority website, San Franciscans aren’t really on the verge of realizing this utopian urban vision of 21st century high-speed rail burrowing its way into SoMa over the next few years.

“The projection of that is less clear now. The delays with the high-speed rail have created some challenges for us,” said Adam Alberti of the high-powered communications firm Singer Associates, which represents the TJPA. Contributing to the delay and uncertainty is the indefinitely delayed plan for the electricification of Caltrain tracks that would be a precursor to bringing the trains downtown.

Now, even though the current Transbay Terminal rebuild (scheduled for completion in 2017) includes a “train box,” funding hasn’t yet been identified for the tunneling to get the trains there. That depends on federal allocations and the New Starts program administered by the Metropolitan Transportation Commission.

But the 930-foot Transbay Tower has its approvals, with the property scheduled to be formally transferred to the Hines/Boston Properties building team in the next couple months, followed in the coming years by other parcels in the area for more high-rises.

“The other parcels will be metered out and put out when we get maximum return for taxpayers,” Alberti said. “The transit center itself is on schedule and on budget, so it’s moving forward.”

That’s great, even if it’s just going to be a glorified bus station for the foreseeable future as the high-rises that are being built as part of this trade-off for trains help inch San Francisco a bit closer to Manhattanization.