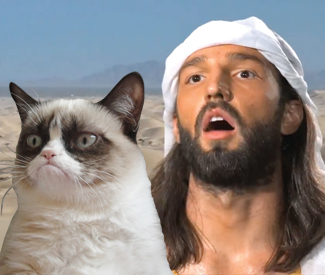 YEAR IN FILM Welcome to “Shit Year-in-Film Writers Say”! This was a swag/YOLO year for video memes (vemes?): they helped take down a major presidential candidate (47 percent, baby), helped elect another presidential candidate (Obama hugging Sandy victims), made sure “Call Me Maybe” and “Somebody That I Used To Know” popped up in some form or other on our feeds all year. Also, if .GIFs count as videos — and 2012 was surely the year of the .GIF revival — then even McKayla Maroney is impressed. Forget Angelina Jolie’s leg, texting Hillary, botched Ecce Homo, and stingray photobomb. We are totally going to make it through this list of the big video memes of the year without a single “Ermahgerd.”

Kony 2012 “Nothing is more powerful than an idea whose time has come — whose time is now.” So began the most epic viral tl;dw;po (too long; didn’t watch; porn’s on) videos of our time, in which Invisible Children, Inc. attempted to bring down a merciless Ugandan guerilla warlord by … asking you to put up posters on telephone poles around your neighborhood on April 20? Something like that, but mostly it was about how videogenic Invisible Children founder Jason Russell’s son was, and also how suddenly all of America understood what the Facebook “share” button was for. (Back then, people were actually confused over the difference between “like” and “share” — Kony trained us well.) The whole purpose was to make Lord’s Resistance Army leader Joseph Kony famous, thus insuring his doom somehow. But it was all upstaged by Russell’s own fame-sealing incident, a TMZ-perfect naked masturbation meltdown on the streets of San Diego. “Exhaustion”? We think celebration. Break out the meth, we’re saving Uganda!

Innocence of Muslims The thing is, what happened in that compound in Benghazi really was weird. But we’re inundated with stereotypes of “Muslim Rage” on the one hand and concrete examples of the power of social media to radicalize the Arab world on the other. So, it was all too easy to believe a mob of incensed Muslims — exacerbated by some crappy YouTube video about Muhammed’s life that makes the seapunk aesthetic look positively Picasso-esque, which was produced by a slimy Muslim-baiting Egyptian ex-pat Coptic Christian, now in jail for violating probation — broke into an American consulate building and killed some cool people. That’s no more the true story than this video.

“Gangnam Style” One … billion … views. That is all. Oh, and the best dance craze since Chicken Noodle Soup. Suck it, Macarena.

Curiosity OK not a meme exactly — our much-feared mash-up with Wall-E and Short Circuit‘s Number 5 singing Katy Perry’s “E.T.” never materialized — but this Mars Rover surely was one of the most striking image-makers of, like, forever. Hey girl, exquisite NASA wanderer Curiosity Tweeted, Facebooked, apped, and even selfied live from the freaking red planet. Best of all, it provided brilliant stop-motion panoramic video footage of our beloved invaders’ homeland. Also, hot mohawk guy.

Year of the Cats Nothing will ever beat 2009 in terms of monumental years for Internet cat RULING. That was the year that Keyboard Cat, Maru, and “Kittens Inspired by Kittens,” along with ubiquitous feline parodies of Three Wolf Moon, all made their debuts. And we still adored Obama? Miss u, 2009. But look out, year that Animal Collective topped the Billboard charts — 2012 produced its own trifecta of power kitties: Tard, Lil Bub, and Colonel Meow (although we’re partial to klutzy, boa-bedecked, recently politically outspoken Luna the Fashion Kitty). Wall-eyed, tart-tongued Bub and fuzz-addled alien leader Colonel Meow got a bit derailed by infighting, leaving an opening that Tard the Grumpy Cat seized to become the indisputable, adorably cantankerous winner of mew-thousand-and-squeelve. All were featured on Good Morning America, countless audio-challenged YouTube videos, and fantasy airbrush artwork of the Mayan Apocalypse. We would give anything to snuggle Tard. Just saying.