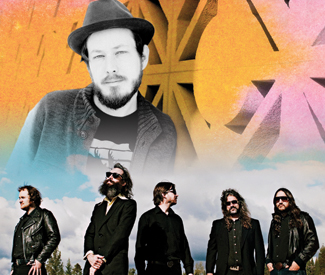 TOFU AND WHISKEY Vetiver and Howlin Rain have both been haunting around the Bay for the better part of a decade. Sonically split, playing tender Americana folk and 1970s-tinged psychedelic rock, respectively, the bands share a common thread of superior musicanship and drive — each releasing a landmark album in the past year or so (Howlin Rain’s The Russian Wilds and Vetiver’s The Errant Charm). The other link? Mutual admiration.

The two bands will play a series of three concerts together this weekend (Fri/28, Sat/ 29, Mon/31, 9pm, $20–$35, Cafe Du Nord, 2170 Market, SF. www.cafedunord.com). In anticipation of those, we did a sort of round-robin of interviews. I asked the musicians — Vetiver band leader and chief songwriter Andy Cabic and Howlin Rain’s Ethan Miller — a few general questions, then they took their conversation adrift, discussing literary influences, favorite Bay Area bands, and “the softest mosh pit in history.” Here are some hearty pieces of the conversation. There’ll be more up on SFBG.com/Noise.

SFBG What compelled you to create music in San Francisco, initially? What keeps you here?

AC I was playing music before I moved here and just gradually found folks to play with here in SF. Bands like Thinking Fellers Union and Caroliner were an initial inspiration. I’ve been here a while and have an apartment with reasonable rent, so that along with the weather, food, community and landscape of the city keeps me here.

EM Initially I moved up from that haunted little paradise that is Santa Cruz to be with my band at the time, Comets On Fire. The rest of the guys had all started migrating to the city and I was finishing up school there, I knew I needed to be with the band and San Francisco had a real buzz of excitement and electricity in the air for us at that time, we were moving toward a dark magic both in the atmosphere of San Francisco and the creative work that was ahead of us.

I actually live in Oakland. I love it here. I stay for my bands, the culture, access to the art museums, the food, the music, the airports, the architecture, the weather, the outlying and incorporated nature, the people, my friends, the work opportunities — I could go on and on, I really don’t have any incentive to leave. After 10 years of living in the metropolitan Bay Area I think my romance with these cities and all they have to offer is stronger than ever and my engagement with their mythologies is increasing daily.

AC [Ethan,]I know you are a voracious reader, and someone who is a fan of epic and oftentimes challenging works of fiction, like Valis, Gravity’s Rainbow, and War and Peace. What is the attraction to committing to a lengthy or monumental work, and how does this impact your songwriting?

EM I started to get into some pretty dark head places when we were making the last record The Russian Wilds. As it dragged into year three, I realized I really needed some highly focused activities outside of music in my life to dismantle stress/anger/exasperation/despair etc. I began jogging religiously to beat these emotions out of my body on the pavement and I took on some heavy books to beat them out of my mind. Moby Dick and War and Peace were the two big ones that began to clear the mental air for me.

Even though we’d finished the album and life moved on to a different kind of pace and substance, I loved the challenge and grandiosity of those works and continued on with the epics. I read Gravity’s Rainbow this year while on the road near the end of our tour cycle and loved it. It is a work that has taunted, haunted, and eluded me for years and now I can say it’s one of my all time favorites; it just took some relatively hard work and time to begin to engage properly with it. It is a true and singular masterpiece but it plays by a different set of rules than most of us are used to dealing with in literature.

AC Can you talk a little bit about your relationship with Tim Green and his role in the recording process of ‘The Russian Wilds’?

EM Tim worked for months and months, perhaps dedicated half his year to The Russian Wilds. I can’t say enough about his focus and enthusiasm for the making of that album. Tim and I have been working together on records for 13 years now and we have a pretty telepathic level of communication at this point. I always learn from him, a true professional and an incredible mix of artist and scientist and a great friend. The songs that you hear on that album were chosen and shaped by Rick in their basic forms but the sounds and the “album” that you hear is Tim Green. That’s his blood, sweat, and tears along with ours.

EM Stylistically, perhaps the thing Vetiver is most famous for is your “hushed”/”understated” delivery. Your singing, phrasing, and various levels of serene projection really are the mechanism that delivers Vetiver’s artistic manifesto. When you first began to sing, was what we now know as your style already there by intention or default? Was there a conscious decision to build that style?

AC I think I’ve always sung in a soft way. I had a band in college where I tried yelling and shouting and in that context it worked alright, but never quite clicked for me. I was usually hoarse by the end of those songs. I have a predilection for jangly, poppy sounds and melodic singing, and having never been trained or really taught how to sing correctly, I don’t sing with a very strong voice.

Getting an acoustic guitar and learning to fingerpick allowed me to bring the volume of the performance in line with my voice, and helped me develop a songwriting style that felt easier and more natural.

EM I’m keen to know what kind of literary influences move your musical mind…favorite books or authors that you go back to for musical inspiration year after year? Do you often cross-pollinate influences for songwriting inspiration? Cinema, poetry, visual art?

AC I worked for some years as a buyer for a used bookstore (Aardvark Books on Church at Market…the best!), and though it was one of my favorite jobs, it kind of ruined my ability to stick to one book at a time, hence my reading taste is a bit divided. I read a lot of non-fiction, history, and biographies.

As far as fiction goes, I’m a fan of authors who imbue their writing with their own personal voice. Charles Portis, Robert Walser, Eric Ambler, Paul (and Jane) Bowles, Donald Barthelme and Gertrude Stein are a few of my favorite authors. I’m inspired by economy of language and simplicity, when a lot is communicated with just a few well-chosen words. Conviction of conception is important to me. Bold ideas executed with modesty. The artwork and lived life of Wallace Berman and Marcel Duchamp is a big inspiration for me as well.

EM When we were backstage at a show a while back you told me about a mosh pit that broke out at a Vetiver gig last year. You or someone in the conversation described it as one of the softest mosh pits in history…

AC This was earlier this year, at Pitzer College, during their Kohoutek Festival. It was a blow-out for the students at the end of their term, and we were asked to play last, which is unusual as Vetiver’s sound isn’t exactly of a climactic nature, let’s say. Kids were definitely tripping balls and the prior electronic pop acts had raised the bar to where everyone was ready to go.

A significant portion of the people up front were mesmerized by the dancer twirling her LED hula hoop. That kind of thing. And basically when we began, some folks started pushing around and trying to make it more than it probably was. Some loose student with large pupils got on stage and strained inanities into the microphone between songs, and we were told after a few tunes that the police had arrived and asked to turn ourselves down. We’re probably the only band that has no problem turning down.

EM There are great rolling layers of ambience beneath the more attention grabbing pop and rock elements of ‘The Errant Charm.’ It’s almost as if another dimension has slipped into the world we know and casts a dream state on the listener. A subtle overthrow of pop consciousness. What is that ambient world? Is it of a Machiavellian nature? And why or how is it there flowing effortlessly and breeze-like in and out of a more familiar pop world?

AC This ambient world is a reflective space for me. The Errant Charm may have more of this as the album began with myself and Thom Monahan building layers of keyboards and effects as a substrate for the tunes. I love catchy melodies as well as slow moving ambiences and tried to create opportunities for both to coexist.

AC What’s your favorite underrated Bay Area band of all time and why?

EM Man, this is a tough one between Icky Boyfriends and Monoshock. Probably Icky Boyfriends. Their reunion gig at the Hemlock this year was really something else. I’ve been super into the Public Nuisance record that just got reissued, but they are a lost group from Sacramento and that may be a little too far out from the Bay. Still worth checking out!