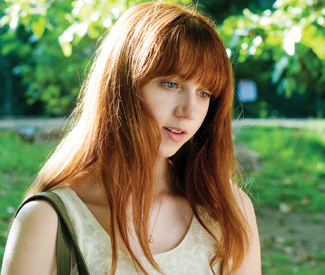 YEAR IN FILM Cluck as you may, it was only a matter of time before the chicks started rewriting those chick flicks. Tina Fey, Kristen Wiig, and their peers represent the girls — how politically incorrect — in all their messy, sexy, oozy, frizzy-haired, fallible, flabby, and unflappable glory. And this year saw a major meeting in the ladies room, films out real soon, that poked fun at women’s work, relationships, identities, and insecurities.

The pedestal that history’s most notorious auteur-patriarch was so quick to place his icy blondes upon, rhapsodized in the nostalgia-laced Hitchcock, was toppled in feminist Pygmalion revamp Ruby Sparks, penned by lead actress Zoe Kazan. Meanwhile, Rashida Jones took a revisionist tact and rethought the second-wave myth of the woman who can have it all by writing and playing the lovable power bitch who nevertheless kicks her slacker soul mate to the curb in Celeste and Jesse Forever.

>>Read more from our Year in Film issue here.

In a more clearly chick-flicky vein, writer-star Lauren Miller amped up the sexual side of the rom-com with For a Good Time, Call…, whereas Julie Delpy reveled in an old-world/new-urban interracial culture clash while writing, directing, and starring in 2 Days in New York. Zoe Lister Jones got the second-banana gal-pal’s revenge by writing herself all the best lines in the unsettlingly girlie Lola Versus, a movie that seemed designed to test the patience of men, critics (especially male ones) by wallowing in one girl’s mournful sexual shenanigans.

Why take on the notoriously powerless role of screenwriter? “A pretty dreary lot of hacks,” Raymond Chandler once put it. “On billboards, in newspaper advertisements, [the writer’s] name will be smaller than that of the most insignificant bit-player who achieves what is known as billing.” It’s a critical step in deconstructing the tropes, disassembling the lines, and unpacking the baggage so many so-called women’s films have been supplying for years. No wonder female actor-writers so often seem to be in a race for the bottom with the guys, writing themselves roles that make themselves look more morally ambiguous, sexually conflicted, taste-testingly lurid, and simply screwed-up. Born in Flames (1983), these movies aren’t.

Instead, dub them the natural byproduct of a DIY video-making movement or simply a pendulum swing away from 2011, when it seemed like all the blockbuster roles for women lay in servant’s quarters of The Help and females were protagonists of only 11 percent of all films, in contrast to 2002’s 16 percent (according to a report by the Center for the Study of Women in Television and Film at San Diego State University).

Chalk it up to the afterglow of Wiig’s Bridesmaids (2011), spinning off the comedy that won over audiences with its flurry of frenemy backstabbing, scatological humor, and extremely close attention to women’s bizarro rites of passage. Or attribute it to the seismic activity set off by Lena Dunham, who satirized the YouTube generation in 2010’s Tiny Furniture, a comedy she herself shot on a Canon 5D digital camera. Dunham’s HBO hit, Girls, only added fuel to a blogosphere backlash that seemed less about Dunham (her looks, her privileged background) and more about hipster-culture smugness, an entire generation’s perceived sense of entitlement, and good ol’ jealousy.

That kind of outcry is a risk that women are increasingly willing to take, as they wrote themselves onto the big screen and told their own stories. They spun tales about their perhaps petty, perhaps big-deal concerns, and went there — to the not so deep, but sort of dirty little secrets in the Hidden World of Girls, to crib the title of that Fey-hosted NPR series.

And however you felt about her genre-defining rom-coms, there was a certain sad poetry to the fact that writer-director Nora Ephron quietly passed away amid this year’s girlquake. She spent less time in front of the camera than many of these actress-writers do, but you know the woman who directed and co-wrote 1992’s This Is My Life — the film that inspired Dunham to make movies — would have been eager to pass the baton.

Gimme the Loot (Adam Leon, US)