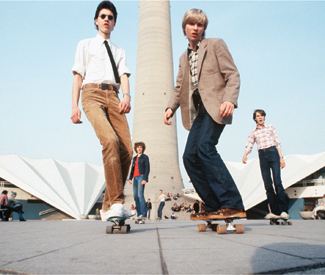 YEAR IN FILM Perhaps the backlash was inevitable. Any film that so flawlessly wows its initial audience in turn begins to receive a lot more scrutiny down the line, and there are definitely things about This Ain’t California to scrutinize. Billed as a documentary, yet centered around a character who may not actually exist, This Ain’t California details the unlikely rise of a rebellious East German skateboarding scene hidden from view behind the Iron Curtain.

An exuberant mischung of archival and new video footage, a brash and punkish soundtrack, animated sequences, and compelling, little-explored subject matter, the film made irreverence its watchword, from storyline to storyboard. And although the sheer scale of this irreverent approach, including the filmmakers’ unorthodox methods of framing their story, raised serious questions about This Ain’t California‘s self-definition as documentary, what was undeniable was the movie’s greatest success — its flawless capture of a zeitgeist, not just of a specific place and time, but of the irrepressible vitality of youth cultures everywhere.

Screened first at the 2012 Berlinale in February (and in San Francisco at the Berlin and Beyond Film Festival in October), This Ain’t California won the coveted “Dialogue en Perspective” prize for young filmmakers, an award given with this statement that foreshadowed the controversy to come: “We’ve rarely been so splendidly manipulated.” While the jury in Berlin was referring to the dynamic editing job spearheaded by 23-year-old Maxine Gödecke, as the film won more awards around the festival circuit — including “Best Documentary” at the Cannes Independent Film Festival — details about its unconventional creation began to emerge in the press. That much of the so-called “archival” video footage was recreated by a slew of modern-day skaters disguised in touchingly hilarious GDR-era hairdos and aggressively mismatched stripes. That all of the footage of the central character Denis “Panik” Paraceck was actually that of Berlin-based skater-model, Kai Hillebrandt. That Denis Paraceck (who, according to the film, died in Afghanistan in 2011) might actually never have existed, let alone been the impetus behind the film’s modern-day reunion of the now-adult skaters (and at least a couple of hired actors, including David Nathan and Tina Bartel).

German news weekly Der Spiegel condemned it as a glorified advertisement for skate culture, bloggers such as Berlin-based Joseph Pearson of The Needle decried the dangerous folly of Germans rewriting their own history, and the filmmakers themselves have been cagey about admitting to the extent of their subterfuge.

“[It’s] so much more fun to keep that secret,” director Martin Persiel explains to me via email when asked to comment.

But lest the naysayers condemn the film as pure hoax, it should be noted that there most definitely was an underground skate scene in East Germany, in addition to other outlaw scenes, including break dancers, punk rockers, and heavy metal bands. Plenty of the film’s old-school skate rats are verifiable as such, and some of the most frankly unbelievable details of the film, such as a compatriot with a Finnish passport being tapped to smuggle boards in from the West, appear to be corroborated independently by academic Kai Reinhart, who has been researching sports history and GDR funsportart since 2005.

“As a filmmaker there is a huge responsibility to truthful depiction of your subject,” Persiel insists. “[And] as far as feedback from the skaters from the East goes, we did do justice to their story.”

On the controversy over allowing a partially fictitious film win awards in the documentary category (against presumably less colorful and more rigorously fact-based films), Persiel remains silent, though he does theorize that the definition of “documentary” is expanding and evolving all the time.

“I call This Ain’t California a ‘documentary tale’,” he explicates, adding his own micro-category. It’s an explanation that probably won’t placate his detractors, but whatever side of the definition of “documentary” the film winds up being relegated to, the definition of “best” will still apply. No matter what, it’s a movie well worth seeing, and controversies aside, a movie well worth having been made — for truly we have been splendidly manipulated. *