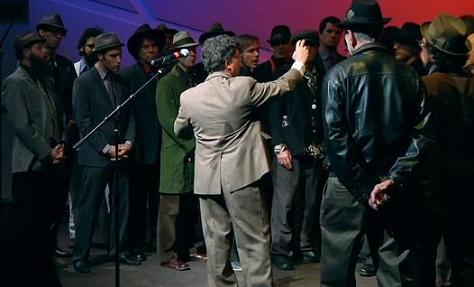 Observant or not, there’s no escaping the Festivus Chrismakwanzakah season, and while you might be grinching it alone with the holiday spirit best known as Kentucky Bourbon, you can’t entirely avoid the pervasive influence that is holiday music. Music, after all, is one of our best tools for communicating intangibles such as emotion, faith, and belief in supernatural beings, and there’s hardly anyone sentient who could fail to be momentarily moved by a rendition of the haunting “Coventry Carol” or Handel’s “Messiah”.

Somewhat unfortunately, Chanukah’s contributions to the seasonal playlist are relatively sparse as compared to those of the big blockbuster holiday it shares the month with: mostly bland, grade school assembly-style songs about dreidels and goofily adolescent ones by Adam Sandler and the Maccabeats.

A pity the Jewish liturgical tradition has failed to produce a Johann Sebastian Bach or even a Benjamin Britten, but at least there’s latkes, which make up for a lot. And also, the material music world does not lack for gifted Jewish bards, so celebrating the sixth night of Chanukah at the Contemporary Jewish Museum with Leonard Cohen cover chorus The Conspiracy of Beards was actually about as perfectly Jewish as it gets.

The Beards have been performing a capella versions of the poetic works of the “High Priest of Solitude” for almost 10 years. Not Cohen impersonators so much as interpreters, the Beards’ approach to the music of Leonard Cohen has always been one of playful exploration — adding simple harmonies, basso profundo, and falsetto trills to Cohen’s weathered range, expanding his often solitary focus into one more piercingly universal. Ensconced in the CJM’s vaulted Goldman Hall, which has recently hosted appearances by Literary Death Match, the Porchlight storytelling series, Dischord Records founder Ian MacKaye, and a screening of The Big Lebowski, the Beards joyfully sang a treasured clutch of favorite Cohen tunes — mostly classics such as “Famous Blue Raincoat” and “Chelsea Hotel No. 2”. For their signature song, “Bird on a Wire” they all broke formation, and stood in a single line, arms wrapped around each other’s shoulders in a show of camaraderie, even as they sang of the freedom of the solitary rambler.

Building on the theme of camaraderie, San Francisco’s tenth annual edition of Phil Kline’s twenty year-old “Unsilent Night” went off without a hitch on Saturday, despite the incessant rain of the day and the small clusters of belligerent Santas that still dotted the chilly Mission District landscape. With the rain serendipitously vanished just before the scheduled go-time of 7pm, a relatively small but hardy group showed up to the corner of Dolores and 18th Street, boomboxes at the ready.

“Unsilent Night” is a four-part soundscape for multiple speakers, the more the merrier, and as the 45-minute piece plays, the four separate tracks weave together into a lustrous tapestry of ambient sound interspersed with golden threads of angel choirs and purposeful bells. Combining the conviviality of a caroling party with the secular appeal of experimental noisemaking, we strolled through the narrow corridors of the Mission’s more tranquil side streets, encouraging stares, smiles, and even spontaneous joiners (including a few Santas who played James Brown at a low volume in conceptual counterpoint). We spent the piece’s final phrases perched hillside in Dolores Park, contemplating the view of sparkling lights and wet pavement, as the music trailed off to whatever realm spent notes are relegated to—the sacred and profane alike.