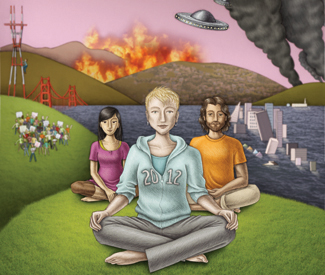 Rev. Billy Talen started off as a trickster, a performance artist, and a political activist appropriating the role of the evangelical preacher (a la Jerry Farwell or Jimmy Swaggert). He was the pastor of the Church of Stop Shopping, standing in front of the Disney Store in Times Square railing against the evils of sweatshops and consumerism.

That was more than 10 years ago, and Talen, his choir, and his flock have grown and evolved since then, although they retained their core tactic of invading the citadels of commerce to engage in performance art and civil disobedience. They renamed themselves the Church of Life After Shopping, wrote books and made a movie called What Would Jesus Buy?, and then became the Church of Earthalujah five years ago when their focus switched to climate change and environmental justice issues.

Along the way, their issues and concerns became more dire, the threats they were addressing elevated to matters of survival rather than social justice. So with the Dec. 21, 2012 date approaching, Talen returned to Times Square — this time fitting right in with its doomsday preachers — and wrote a new book called The End of the World, which he’ll release in Times Square on that auspicious date.

“I’ll be back with a science-based Armageddon,” Talen told me. “Now I’m looping all the way around the tracks back to Times Square where I started. But Hurricane Sandy makes this not so tongue-in-cheek.”

When Hurricane Sandy slammed into New York City and the surrounding coastline with the rare strength of superstorm that climatologists say will be more common in our warming world, Talen said it was a wake-up call for those insulated by that urban environment.

“New York doesn’t have climate, we have culture,” Talen said, but Sandy changed that perspective and brought the reality of climate change home, right into the heart of capitalism. “The idea that nature is beyond the city limits, that may be over now.”

Talen said there’s “ecosystem collapse going on everyday. Earth is a total ecosystem and Earth has a tipping point, just like local ecosystems have tipping points.” His latest book leans heavily on the research of Barnosky and his team, which Talen said dovetails perfectly with the Mayan prophecies and the hopes that the galactic alignment will spark a shift in global consciousness that wakes us up to pressing problems that demand immediate action.

“It allows us to have a stage for the question, a frame for the question. We have to ask very basic questions about our survival,” Talen said. “We have this uncanny mythic, prophetic calendar, this 5,000-year calendar ending and beginning. And we have the scientists saying the same thing, so where does that leave you?”