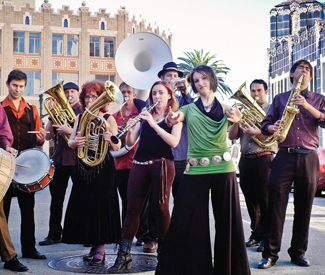 Tofu and Whiskey If you’re going to book a Balkan-influenced band, don’t expect the crowd to stay put. The Bay Area’s Inspector Gadje, an offshoot of the Brass Liberation Orchestra, usually packs in around 15 players, including 12 on horns and three percussionists. When the raucous group came marching through the wilderness (read: Golden Gate Park) during Outside Lands, it filled in crevices between trees, and created an instant party atmosphere between the main stages. Those fast-walking through the thoroughfare of Choco Lands stopped in their tracks, surrounded the group, and started dancing, against everyone’s better judgment. It all happened in the blink of a dirt-lodged eye.

“A lot of Balkan music has a great ‘party’ feel to it…even when the music includes moments or textures that might have a darker feel, the music is played with an undeniable exuberance,” says Oakland’s David Murray. “The rhythms of the Balkans; Greece, Macedonia, Serbia, Bulgaria, etc., include many unusual time signatures that are compelling and especially attractive to musicians.”

Murray, a graphic designer by trade, is one of those musicians — he’s been playing bouzouki in Greek Rebetika band Disciples of Markos since 2004, and also plays fiddle in the Squirrelly Stringband, which is the house band for the North Oakland square dance (a “monthly underground hillbilly dance party,” as he describes it). As a combination of his art and music backgrounds, he also produces and designs albums for the Dust-to-Digital record label, which specializes in reissuing obscure folk and world music.

His newest project, however, is all about the music of the Balkans. He began the Berkeley Balkan Bacchanal (berkeleybalkanbacchanal.com) music series at Berkeley’s Starry Plough in October 2011. He got the idea after meeting like-minded acts in the Bay Area, with affinities for Southeastern European styles of music. In the past year or so, the monthly Balkan showcase has seen performances by Murray’s band, along with Inspector Gadje, Zoyres, Veretski Pass, Janam, Gadjitos, and a dozen or so more.

The last Berkeley Balkan Bacchanal of 2012 takes place this week, with Fanfare Zambaleta, “Middle Eastern marching band” MWE, and Helm, a group that specializes in Turkish classical and pop music (Thu/20, 8pm. Starry Plough, 3101 Shattuck, Berk. www.starryploughpub.com). Murray says MWE, which includes three or four horns and the wailing Turkish reed (zurna), is known to play in the middle of the dancefloor with the crowd dancing around them. See? Instant party music.

I asked Murray if it’s been challenging to track down acts for this series, as it has such specific influences but he shut that down quick: “No, it hasn’t been difficult at all. There are a lot of great bands around here that fit into the theme of our series. At one point there were no less than three Balkan brass bands in town…And because we don’t mind pushing the boundaries of the Balkans to include neighboring influences, we’ve been able to feature bands that play Algerian music, Persian, and more.”

He added in some historical links, for good measure: “The Bay Area has a very vibrant Balkan music scene, which has some interesting origins in the 1960s, with bands like Kaleidoscope. The early California Renaissance Fairs provided an early outlet for many Balkan musicians, and music camps, such as Lark Camp in Mendocino, have been inspiring and teaching musicians for generations.”

As a novice listener, I’ve (admittedly) grown interested in Balkan sounds via more mainstream bands that have remote influences from the regions, acts like Balkan Beat Box and early Beirut, which typically blend sounds and instruments from a variety of places with pop and folk influences; but also thanks to Gogol Bordello and, more recently, Inspector Gadje, which is more purely influenced by the Balkan style.

“I tend to avoid bands that are actively ‘fusion,’ it doesn’t interest me much, especially bands that combine many styles,” Murray says. “It seems, to me, to usually dilute the very thing that makes the music interesting to begin with. But I’m sure there’s a wide range of opinions on this subject among the various bands and audience members.”

He says he’s more interested in bands that dig deep into the music they play, understanding the history and playing it in an authentic style. He brings up local bands such as Veretski Pass, which plays klezmer with accordion, fiddle, and bass, but also has studied the Jewish music of the Carpathian mountains, noting that the band will be back to the Starry Plough Jan. 17 for an all-klezmer night with the Gonifs.

But Murray points out that this doesn’t mean the acts of the Berkeley Balkan Bacchanal are rigid. “…that’s not to say that these bands are stuffy academics or that they don’t play with styles to some degree. On the contrary, most of the players are young and bring the music to life in a vibrant way that gets heads bobbing and feet dancing.”

“A great example is the Mano Cherga band, which played in September, and sounds like a Serbian party band you’d hear at a drunken wedding bash.”

Bring on the brass and vodka.

There are a number of reasons why A Very Castle Face Christmas is an obvious choice. There’s performances by Thee Oh Sees, Blasted Canyons, Warm Soda, and recent GOLDIES winner the Mallard. Plus, it’s a benefit for the Coalition on Homelessness in SF, a very worthy cause. There’s also the added bonus of the venue itself. I just this week finally made it to a show at newish Mission venue the Chapel, and it was, frankly, charming — from the dark-wood high beam arched ceiling, to the multiple bars (three), to the band-watching angles (you can see from the main room, the balcony, and the soon-to-be-restaurant, plus there are flatscreens linked to cameras fixed on the stage). Win-win-win. Thu/20, 8:30pm, $15. Chapel, 777 Valencia, SF; www.thechapelsf.com.

Following front person Matt Pike’s treatment for alcohol addiction, Oakland’s beloved stoner metal act High on Fire is back. Well, technically, the band has been back for about a month, touring the country on most recent release De Vermis Mysteriis. But this will be it’s first big show back in the Bay, where it belongs. With Goatwhore, Lo-Pan. Sat/22, 9pm, $21. Slim’s, 333 11th St., SF. www.slimspresents.com.

Remember this summer, when distortion-loving East Bay act CHURCHES was Kickstarting a record written for the pro-marriage equality cause? The band — led by Caleb Nichols of Port O’Brien and Grand Lake, Pat Spurgeon of Rogue Wave, and Dominic East — exceeded its goal, and that seven-inch (LOVELIFE) will see release at Bottom of the Hill this week. The trio also released a music video in conjunction with the record: interspersed with the band playing is a classic family portrait set-up with scenes of smiling families, and CHURCHES with their friends and loved ones, including Nichol’s fiance, Grand Lake drummer John Pomeroy. With Tijuana Panthers, Toshio Hirano. Sat/22, 9pm, $12. Bottom of the Hill, 1233 17th St., SF; www.bottomofthehill.com