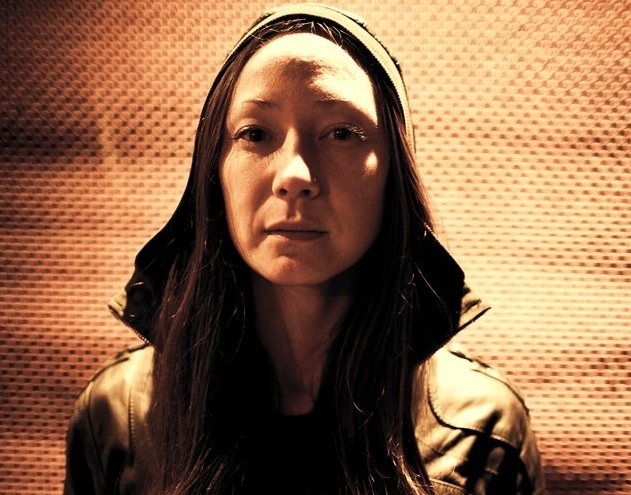 For those of you who haven’t been listening: Ana Sia is kind of a big deal. One of those quaintly San Francisco nightlife things — you blink for a hot minute, and someone familiar on the scene blows up, their hard work rewarded with major festival gigs, a large and growing following, and DJ sets being featured on NPR. Heeeey.

I’ve been a fan of the poised yet energetic Ana for a long while, and I must say I’m pleased as punch for her continued success — and to see what she’s got in store for us as she plays again in SF. (She’s one of the headliners, along with the UK’s excellently house and techy Ben UFO, at Friday night’s As You Like It party at Beat Box.) Onstage, the local Frite Nite label head quickly pulls you into her zone, tempering a concentration born of pure appreciation of the music with some playful bouncing and disarming charm. “I’m having a shit-ton of fun!” you can hear her shouting from the decks.

Categorizing her actual sound, however, can prove challenging.

Ana’s been through a few transfomations. I first became aware of her as a member of the underground techno scene, then as a part of the crunk-meets-dubstep-meets-Burning Man Bassnectar touring juggernaut — at one point pimping herself with a wink as playing “global slut psy-hop,” a moniker which went well with the gaudy scene of the late ’00s. Then, as part of Frite Nite, she became a brainier glitch advocate, delving into more adventurous realms of broken bass. But she’s always been courageous, forceful, and fun — even now, when she’s adding full-on house and ravier techno to the mix, as you can hear below.

Love it. She took a minute to email me the answers to some questions in anticipation of her Friday gig. Welcome back, Ana.

SFBG You’ve been playing all over lately — how does it feel when you come back to San Francisco?

ANA SIAReturning home and playing shows with my peers and in front of what very much feels like family is the greatest part of my schedule. What makes San Francisco so tight is the diversity and multi-cultural melange of the people, and those acknowledgments certainly carry through to the art scene. Connecting with listeners is easier on the home court — I feel much more safe and secure introducing more challenging music and unfamiliar sounds because everyone is so open here, They genuinely understand and love music. Ask any touring artist this question and I bet they say the same about our community here!

SFBGYour sound has really evolved since you were playing here regularly. Can you tell me where you’re at now, and what we can expect?

ANA SIA I think the one thing that has not changed about my sound is that it’s always different than the last time — whether that’s a yay or nay thing is another issue though. But right now, people can expect the agenda i’ve been pushing for a minute now; classy yet ratchet bass music, stepping on the toes of techno-house. And yeah, i’ve always tried to stay ahead of the curve for DJ sets, but honestly all the latest trends and best music out right now is re-introducing fundamental dance music. It’s nothing really super-shiny and new. It’s all slightly more modernized revisions of classic sounds which i’m grateful for. Because for me, my young rave days began with house.

SFBG What equipment are you using lately — and can you tell us about some of your recent or upcoming releases?

ANA SIA Ableton Live is still my bandmate, but I have this new bossy future-midi controller, the QuNeo. I’m working on an EP right now, probably music that no ones’ expecting but all the tunes are in the territory of the above mentioned.

SFBG In my mind, your sound is always evolving, you’ve always been on the cutting edge — it’s hard for a writer like me to keep up with you! Who are you listening to now? And since you travel so much, do you have any good stories from the road?

ANA SIA Such a loaded question! Presently in my playlist of the last few months : Kendrick Lamar, Detroit Swindle, Bambounou, George Fitzgerald, Bach, 2 Chains, Dj Spinn, Lukid. And road stories? that’s classified information. Mostly because i fear self-incrimination. But i will say that it is shocking how many really great sushi restaurants there are in the most unsuspected of places in the middle of America.

AS YOU LIKE IT with ANA SIA and BEN UFO