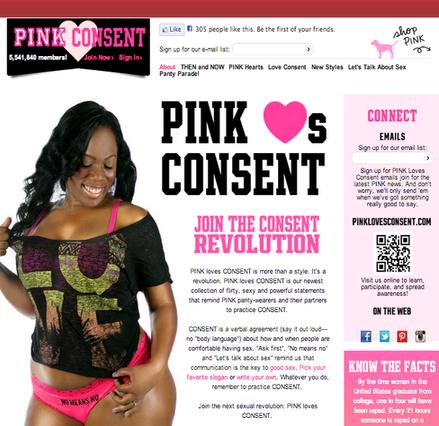 Before we get to the week in Bay Area sex events, here is something you will want to be aware of: the ingenious ad campaign perpetuated by Baltimore activists from Force: Upsetting Rape Culture, who riffed off of questionable underwear design from Victoria’s Secret. In doing so [as Baltimore Fishbowl reports], the group ended up giving the company irrefutable proof that yes, their clientele cares about consent when in comes to sex.

“[VS’] ‘Sure Thing’ and ‘Yes No Maybe’ and ‘NO peeking’ underwear promote the idea of limitless availability,” Force activists Hannah Brancato and Rebecca Nagle told Fishbowl. “Or on the other hand, leaving the choice up to the (presumably male) partner. The brand teaches girls to be coy instead of vocal and makes it seem uncool and unsexy to say no and mean it.”

So what’d they do about it? They made a fake VS website promoting undies that say “No Means No” and “Ask First”, and mounted a viral social media campaign, and soon enough the praise for VS’ apparent conscious-dawning was rolling in via Twitter, Facebook, etc. from survivors of sexual assault and VS employees alike. The website and @LoveConsent Twitter handle were eventually shut down, but not before their effects were visible across the Interwebs.

So that was neat. On to the week in Bay sex.

Insofar periods are related to babies are related to the act of making love, this is a sex event! This lil’ indie gift fair features sea sponge menustration kits from Holy Sponge, kits that feature besides two all-natural, sustainably-harvested sea sponges, tea tree oil with which to disinfect them, and desert or white sage with which to purfity thyself. Also, lunar eclipses are sexy, and you will want to be in a room full of lunaphiles when Friday’s occurs, so go. Also on sale: Chamomile on Mars‘ hangover tea and Down At Lulu‘s vintage ladywear.

It’s not important what you have on underneath them, gentlemen — panties, briefs, jocks, or otherwise. What matter is that you remove them, immediately. Your pants, of course. And you’ll be in good company in this deliciously seedy SoMa dive — studly go-gos serve as role models for what to do when you’ve freed yourself from lower body constrictions.

So fluff up your PinkMink and shine up your Ball-Hoo

Put that ruff on your muff and buff up your wazoos

The joint will be hoppin, the bubbly poppin

and of Merriment & Mirth- you may ask?

no, there’s no stopping!

Sat/15, 10pm-late, price and location info sent to those who sign up for free membership. www.kinkysalon.com

Enter the world of Dottie Lux, creator of this local troupe of pasty-shaking, heart-breaking burlesque performers. Today’s showcase features numbers by Lux La Croix, Dorian Faust, and Ruby Vixen — plus a host of guest stars and Lux herself overseeing precedings.

Ten years ago, feminist porn icons Annie Sprinkle and Robyn Few (RIP) marked December 17th by holding a candlelight vigil for the 70-plus victims, many of them sex workers, of Washington State’s Green River Killer. Since then, their simple ritual has spread across the globe, and the day has become an annual opportunity to call for justice for sex workers everywhere. Attend the vigil at the Center for Sex and Culture, where everyone is invited to add to a community altar to those who’ve passed, and the birth of a new PFLAG-style group for friends and family of sex workers will be announced.

Win a harness, why don’t you?

Drop by your locally-born national purveyor of quality sex accoutrement to meet Tres, who created the SpareParts HardWear line of harnesses. SpareParts’ Sasha harness may be of particular note — the ruched sides of the attached panty give an extra frisson of femme-sexy to your playtime. Sasha is among the two harnesses that will be raffled off today at the store and Tres will be doing fittings for customers, so no more chafing or slipping for you.