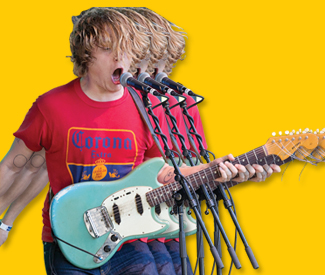 YEAR IN MUSIC “We weren’t supposed to be allowed to play live on the morning news,” Ty Segall says just moments after finishing a meal at In-N-Out, on his way down the coast from San Francisco, the city he can no longer afford to live in, to pick up his 16-year-old sister from his hometown of Laguna Beach. “Giving a bunch of long-haired weirdos really loud amplifiers and free reign on the morning news is just stupid. So I thought that was a great opportunity to do whatever the hell we wanted.”

“And I’m really happy we did that,” he says of the Ty Segall Band’s bizarrely mesmerizing performance of “You’re the Doctor” off this year’s Twins (Drag City), on the Windy City’s WGN Morning News in October. It ended with screeching feedback and Segall repeatedly screaming “Chicago!” into the mic. “It was way too early, so we were already feeling a little weird.” The weirdness rubbed off on the news anchors, who, when the camera panned back to them mid-song, were throwing papers up in the air and pogoing behind their desk. It made for a great split second.

The group of old friends toured extensively this year, playing a whole bunch of festivals including Bumbershoot, the Pitchfork Music Festival (“I had no idea what to expect with that one, because like, you know, Pitchfork is almost a mainstream media outlet now. But that was one of the most wild, definitely craziest festival we played”) and Treasure Island in San Francisco (“most beautiful festival…the scenery — it was just psychotic”).

And Segall again had a full hand of releases over these 12 months. He began the year with a White Fence collaboration: Hair (Drag City), following that up with a Ty Segall Band record, Slaughterhouse (In the Red). Then in October he dropped a solo album, Twins (Drag City).

Each record stood for itself. They were recorded with different bands at various locations (Eric Bauer’s studio in Chinatown, the Hangar in Sacramento). Hair was a true collaboration between Segall and White Fence’s Tim Presley, exploring one another’s strengths through fuzzy noise, psychedelic wanderings and the occasional surfy licks. It was originally slated to be an EP, but it was going well, they decided to put out a full LP.

Slaughterhouse kicks off with foaming feedback and maintains a sonic assault of aggressive, noisy guitars, screaming in the ether, throughout — a loud, frenzied, psychedelic garage-punk masterpiece. Bluesy-punk thumper “Wave Goodbye” turns down the riffs on the intro and lets Segall’s nasal intonations take charge, with a ’70s punk approach: “I went to church and I went to school/I played by all of your other rules/but now it’s time to…wave goodbye/Bye bye.” He shrieks that last “bye bye,” simultaneously recalling early Black Sabbath, and sonically flipping the bird.

“Who can know the heart of youth but youth itself?” — Patti Smith in ‘Just Kids.’

Segall first picked up the guitar at 15 after hearing Black Flag. “I was super into Black Sabbath and Cream and classic rock and then I heard Black Flag and I was like ‘dude, I can play punk.'”

The multi-instrumentalist still plays guitar, first and foremost. Currently, he sticks to a ’66 baby-blue Fender Mustang he calls “Old Blue” or “Blue-y,” but brings along a ’68 Hagstrom as backup.

During the week of Halloween though, Segall, 25, played drums with the first band he joined when he moved to San Francisco eight years back, straight-forward punk act Traditional Fools. It was at Total Trash’s Halloween show at the Verdi Club with a reunited Coachwhips (with Thee Oh Sees’ John Dwyer) and it made for an epic night of reunions for the two men most associated with the current garage rock scene in San Francisco. “I have always thought, and will always think, that John Dwyer is the savior of rock and roll.”

When I bring up the news of Segall’s pal Cronin signing to Merge recently, he has a similar compliment for him: “He’s going to be the savior of us all. I can’t wait until you guys hear his next record; it’s insane.” Segall swears Cronin will be the next big thing.

Late last week, In The Red Recordings announced it would be reissuing Segall and Cronin’s joint 2009 surf-laden, chainsaw-garage record Reverse Shark Attack. In a video from that era for the song “I Wear Black,” Segall and Cronin cruise through town on skateboards in washed-out clips, ever the beach-bred rockers.

It was just three years ago, but that’s lifetime in Ty-land.

As the city has watched him grow Segall has maintained a youthful glow, a raucous, energetic punk spirit surrounded by sun-kissed California locks and a fuck-everything attitude. His sound, however, has expanded. How couldn’t it? He put out three records in 2012, and a dozen more in his relatively short lifetime.

But youthful abandon has caught up Segall. He can longer afford to live and work in San Francisco, the city that loves him so. He plans to move to LA in March or April of 2013. Will the wide sea of local rockers here soon follow suit? How many have we already lost to the rising tides of tech money? It’s a question currently without an answer.

It seems backward, that a year full of such booming professional success and critical acclaim should be the final year he’s able to afford the life he’s lead for the better part of a decade. But perhaps he just needs a break, to go back and focus all of his time and energy on a single release in the far-off future. Give his tired mind a minute to grasp his explosive last year.

“[In 2013] I’m going to like, get my head wrapped around the next thing and take some time, [and] slowly and lazily start working on demos,” he says. “There’s definitely not going to be a record from me for a year. I just want to focus on one thing and make it as best as I can. I’ve never really focused on just one thing for a year straight, so I’d like to do that.”

3. Ty Segall, Slaughterhouse (In the Red)