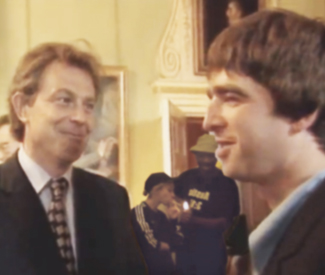 YEAR IN MUSIC Are we being punked? Is this all some kind of stupid joke?

Upon first listen, the sound-world of Berlin-London duo Hype Williams (not the music-video director, mind you) is practically guaranteed to provoke a bewildered response. Incorporating half-baked hooks, brutishly cut-and-pasted samples, apathetic vocals, inept musicianship, crude effects, and grainy production into a gnarled, genreless mishmash, its approach gives off a superficial whiff of laziness and inconsequence.

After further inspection, however, Hype Williams reveals itself as a vital, innovative force in modern music, paving the way for a new form of artistic synthesis in an age when information flows like unchecked tap water.

The impulse to pillage the art-world for scraps and fragments, and reassemble them within a new framework, (see: postmodernism) has a diverse history, from The White Album to the writings of Thomas Pynchon; yet, it was once widely perceived as a snooty, elitist activity reserved for outsider artists, avant-gardists, and other seemingly unreachable, black turtleneck-wearers.

Hype Williams operates at the forefront of what I like to call “new postmodernism,” recycling musical idioms as a kneejerk response to the Internet’s constant outpouring of accessible information. Whereas pre-Internet postmodernism required relative effort, calculation, and resources to connect the dots between musical forms, anyone in 2012 with a laptop, a WiFi connection, a pirated copy of Ableton or Logic, and a Bandcamp account, was a legitimate artist, granted easy access to an infinite sea of musical possibilities.

You know how Brian Eno said his instrument of choice is the recording studio? In 2012, the people’s instrument was the iTunes library/MIDI keyboard combo: easier, and cheaper, to learn than the guitar, with a wider sonic range, to boot.

Given the declining relevance of record labels, studios, expensive gear, marketing campaigns, and other barriers preventing would-be artists from crafting and distributing their work, it was easier and cheaper to be a recording artist/collagist in 2012 than ever before. Hype Williams explored the potential of this new musical landscape more relentlessly, and enthusiastically, than perhaps anyone else this past year, rendering it, in my view, 2012’s most essential musical entity.

Within the context of new postmodernism, Hype Williams’ 2012 output sounds less like goofy amateurism than an unfiltered current of creative energy. On this year’s Black is Beautiful LP, released by Hyperdub under the pseudonym Dean Blunt and Inga Copeland (which may, or may not, be their real names), haphazard beats and keyboard melodies are seemingly recorded in one take, prioritizing creative flow and forward movement over the refinement of previously committed ideas.

The tracks are generically titled (“Track 2,” “Track 8”), opting to skip ahead to the next project in lieu of assigning an identity to the last one. Each of the album’s 15 pieces is a non sequitur to the one before it, evoking the scatterbrained impatience brought on by the Internet age.

“Venice Dreamway” (the only properly titled track of the bunch) slaps a rollicking, free-jazz drum solo over an ominous synth drone, while “Track 8” strongly resembles an underwater level from Super Mario Bros.; “Track 10” is an extended, weed-addled dub workout, spilling over the 9-minute mark, while the 35-second “Track 6” consists of little more than a shambolic MIDI flute melody. “Track 5” is a reckless, sloppily executed take on an otherwise competent vocal pop song; and, interestingly enough, “Track 2” is a cover of Bobby and Joe Emerson’s “Baby,” a ’70s R&B obscurity that Ariel Pink’s Haunted Graffiti also reinterpreted on this year’s Mature Themes.

Highly regarded among DIY enthusiasts, Ariel Pink is often credited for rescuing postmodernism from the artistic elite, and thus providing the roadmap to Hype Williams’ aesthetic. In an interview this past September, I asked Pink to rattle off a list of favorite books, albums, films, and visual artists: a request he (politely) declined. “Favorites? No,” he explained. “My aesthetic is too all-inclusive. That’s the best part, and the worst part about it. It doesn’t make me a very loyal fan of any one thing in particular. But, at the same time, I love everything.”

Aside from fuzzy, queasy texture, this “all-inclusive” philosophy is the primary link between Hype Williams’ and Ariel Pink’s output. Just as Pink’s kaleidoscopic lo-fi pop makes no judgments between “good” and “bad” musical influences, forcing the entire art-world through his sonic meat grinder, one can picture Hype Williams hoarding digital scraps and analog curiosities, recycling them indiscriminately into new forms.

United by a simultaneous love for, and indifference to, all forms of art, both Pink and Hype Williams seem motivated not by ironic detachment or hipster posturing, (see: Hippos In Tanks, Not Not Fun) but by the pure joy and freedom of using everything available.

De la Vega described his aesthetic to the Guardian as “the embodiment of this idea that there is such a huge cross-section between various musical genres, and particular production styles of music, so rap, electronic… post-dubstep, post-anything. There’s this huge intersection between all these scenes that doesn’t actually have, strangely, its own outlet.”

Named “Public Access,” the event set an ideal context for Hype Williams’ art, recognizing its position at the crossroads of musical approaches. The duo’s performance (its second US appearance, ever) was a wild success, the most engaging “laptop set” I’ve ever witnessed, and perhaps the best live show I saw in all of 2012.

With strobe lights flashing, and the stage enshrouded in fog, Blunt and Copeland were rendered completely invisible, reinforcing their mysterious public image, and keeping the specifics of their musical process under wraps.

Making full use of the club environment, and its thumping, punishing sonic capabilities, they delivered a seamless, hour-long barrage of heavy, industrial beats, cavernous drones, mysterious field recordings, and characteristically skewed melodies, with the occasional, approachable pop hook thrown in to provide a grounding influence.

With all too many live bands churning out unimaginative replications of their own studio output, Hype Williams’ set was striking, immersive, and wholly refreshing. Ear-splittingly loud, and physically exhausting, it exposed the dark underbelly of the post-everything, all-inclusive approach, daring the audience to submit to its overwhelming, cacophonous potential.

If Black is Beautiful exhibited the joyful liberation of new postmodernism, Blunt and Copeland’s live set was the equivalent of a system overload: inclusive to the point of devastation.

Between an LP for Hyperdub, a handful of web-only mixtapes, and a live SF performance for the ages, Hype Williams spent 2012 re-evaluating the significance, and egalitarian capacity, of postmodernism, in an age when anyone with a WiFi connection can go digital-dumpster-diving for musical scraps to quilt together as they please. As long as casual musicians keep on harnessing the vast creative potential at their fingertips, and “professionals” like Blunt and Copeland continue to expose the waning relevance of the art-world’s precious institutions, our culture of musicianship is bound to inch closer and closer towards democracy.