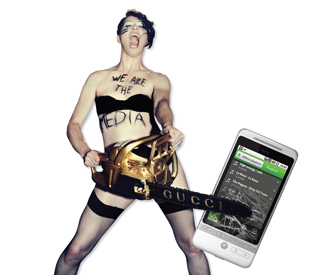 YEAR IN MUSIC If you wanna rob a bank you must be aware. You gotta use the computer upstairs.

Back in June, Bob Boilen, the host of NPR’s All Songs Considered, posted “I Just Deleted All My Music.” It was a gee-how-the-times-they-are-a-changin’ sort of article detailing how Boilen had begun using Apple’s iTunes based cloud service for storing his music collection. It likely would have been shortly forgotten by everyone (including the author) if not for a follow-up response a couple weeks later by the show’s new intern, Emily White. With “I Never Owned Any Music To Begin With,” White — whose 11,000+ song library was largely ripped from her college radio station — confessed to having “never supported physical music as a consumer,” adding, “I honestly don’t think my peers and I will ever pay for albums.”

The subsequent fallout (Camper Van Beethoven’s David Lowery had a long response in which he rebuked “Congratulations, your generation is the first in history to rebel by unsticking it to the man and instead sticking it to weirdo freak musicians!”) became part of an ongoing debate over the state of the record industry. For more than a decade since Napster, the industry has been looking for a new bottom line as physical sales decline, and in keeping with tradition, it seems musicians have been getting shorted.

In a September cover story for New York Magazine, indie rockers Grizzly Bear revealed that despite debuting high on the shrinking Billboard Charts and selling out shows, the band was not exactly living the rockstar lifestyle of years past. Whereas it’s previously been taboo or damaging to integrity to air out money issues (::cough:: Metallica ::cough::), artists in 2012 were increasingly candid about the financial stakes.

Most candid, perhaps, was Damon Krukowski, who gave explicit numbers — in an opinion piece on Pitchfork — for how much his Galaxie 500 bandmates made from online music streaming services like Pandora and Spotify. As the remaining major labels — there are, with EMI finally being acquired by Universal late this year, now three majors, including Sony and Warner Music — attempt to leverage their catalogs online, free streaming services are a major part.

When Pandora founder Tim Westergren — in a refreshing bit of transparency — detailed some financials in October, notably that “Drake and Lil Wayne are fast approaching a $3 million annual rate each,” it was an obvious boon for parent company Universal. For artists in the long-tail though, the rates are not so promising. By Krukowski’s calculations, Galaxie 500’s entire 64-song catalog earned $64.17 from Pandora in a quarter. Spotify in turn has an indie rate of paying $.005 per play, with the hope of scaling up as more people use the service and bring in revenue through either ads or subscription. For a small artist it amounts to a little more than the value of a handful of physical CD sold in the past. (To make matters worse, at the same time he announced large payments to labels, Westergren ironically sought to pass the Internet Radio Fairness Act, which would greatly reduce the royalties streaming sites like Pandora would have to pay artists.)

When you reach the bottom line. The only thing to do is climb.

Krukowski didn’t just suggest people go back to buying CDs or records; at the end of his article he pointed in the direction of Bandcamp, an online distribution platform that allows bands to stream and market their own downloads and merchandise. Bandcamp still takes a cut, but it’s an inversion of the royalty scheme artists traditionally have had with labels and now streaming sites.

Visit the homepage of Bandcamp, and you’ll be greeted by a testimonial from singer Amanda Palmer: “I’ve always tried to be as directly connected with fans as possible, but until you guys came along the infrastructure was much more difficult. Bandcamp brings the whole picture together into a lovely package that not only works, but works WELL. Me and my team made more in one night than I’ve seen to date from my 2008 (major-label) album.” Having found success marketing her album on Bandcamp, Palmer in April attempted to raise some money in advance for her next project via the crowd-sourced funding platform Kickstarter.

Well, attempted is not the right word. Palmer maintains a close relationship with her fans via Twitter and blogs, and they in turn give her a sort of fervent reverence. On a goal of $100,000, the Kickstarter project raised $1.2 million, and Palmer immediately became a model for DIY financing: not only could a person sell an album online, they could produce it as well.

But with the added attention came close scrutiny: Palmer’s habit of having “volunteers” along side her paid band onstage for tour dates irked some outside observers, who felt that with all that money she could afford to pay musician’s wage. Initially, Palmer resisted, saying “If my fans are happy and my audience is happy and the musicians on stage are happy, where’s the problem?” before announcing that, in addition to beer and high-fives, the musicians who assisted her on tour would all receive checks after all. Supporting a Kickstarter often borders on philanthropy, and as a consequence, there’s an interest in making sure the money is well spent.

“A FULL-BLOWN MOTHERFUCKIN’ BATTLE between the old school (people must pay for digital content or musicians will starve and die!!!!) and the new school (digital content cannot be locked, the floodgates are open, let’s figure out a new creative solution!!!)”

That’s how Palmer described NPR intern Emily White’s critical “kerfuffle”, when the two met in September (while Palmer was still the subject of numerous blog posts and the recipient of emails addressed “dear amanda, you ignorant slut…”). But she could have been describing her own situation. Or any musician’s for that matter. Because that battle is going to go on until the record industry goes back to being a music industry, and if there’s been increased openness in the last year from both artists and conglomerates, it’s because they’re no longer alone in setting the terms.

10. Mashup — No. 9. Glitch — I’ll wait for post-Glitch. 8. Electro Swing — No bonus points for sampling from the public domain. 7. Blog House — Clearly all music originates from blogs at this point, so this is just unnecessary. 6. Future [whatever] — The future is not now. 5. Grimes — I liked “Oblivion” as much as the next person, but I really don’t think she deserves a genre unto herself. 4. EDM — No one listens to Acoustic Relaxing Music, this is just lazy. 3. PBR&B — If something is good, don’t put it in a little ghetto genre just to be clever. Call it R&B and let it redefine what that means. 2. Brostep — The popularization of this term hopefully means that the backlash is well on the way. 1. Trap — Having a conversation about Trap in 2012 is like having a conversation about Dubstep in 2007: with a lengthy, laborious explanation. Can’t wait to see what 2017 has in store.