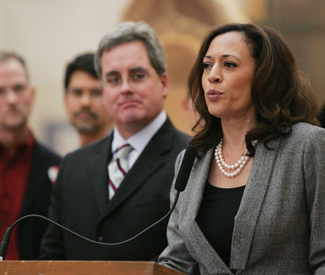 President Barack Obama is fond of reciting the Martin Luther King Jr. quote, “The arc of history is long, but it bends toward justice.” On the issue of marriage equality, that arc looks more like a zig-zagging path that began when San Francisco unilaterally began issuing marriage license to same-sex couples just before Valentines Day in 2004 and ending — its backers hope — in June 2013 with the US Supreme Court affirming the basic constitutional right of everyone to marry whomever they want and to have those marriages treated equally under the law.

“We’ve seen the ups and the downs, the highs and the lows,” said City Attorney Dennis Herrera, who has watched court injunctions blocking marriages by the city, the California Supreme Court ruling that the ban on same-sex marriage violated the state constitution, the 2008 vote amending the constitution through Proposition. 8, and the Ninth Circuit Court ruling that the measure violated federal equal protection standards.

Yet few officials or legal experts are willing to predict with any certainty that this long and winding road will end with a definitive conclusion in June. In fact, Herrera and other same-sex marriage supporters expressed disappointment Dec. 7 when the Supreme Court announced it had decided to review the Ninth Circuit Court ruling that Proposition 8 was unconstitutional.

Letting the ruling in Perry v. Brown stand would have re-legalized same-sex marriages in California, which would have joined the nine other states and the District of Columbia as places where it’s legal for gays and lesbians to get hitched. Yet in taking the case — along with U.S. v. Windsor, which challenges the Defense of Marriage Act and its prohibition on recognizing the inheritance law and tax code rights of same-sex spouses — the court could issue a landmark civil rights ruling striking down all laws that discriminate against same-sex couples.

That’s the hope of California Attorney General Kamala Harris. “Are we a country that is true to its word and true to its spirit, or not?” was how Harris framed the question at a Dec. 7 press conference with Herrera. She focused on the basic equal protection argument and the need to “stand for the principle that we are equal and we will be treated that way.”

Herrera, who had just gotten off a conference call with lead attorneys Theodore Olson and David Boies and the rest of the advocates who are defending same-sex marriage, told reporters that the main goal was a broad ruling: “Ted Olson has made it clear he’s going to make a very broad argument.” Yet the Supreme Court could also issue a narrow ruling, extending the twisty path of this issue.

As for reading the tea leaves, Deputy City Attorney Terry Stewart, who has litigated the city’s position since the beginning, said she doesn’t think anyone knows how this case is going to be resolved — not even the Supreme Court justices themselves. “I don’t think they know, to be honest with you,” Stewart said when asked whether taking the Perry and DOMA cases indicate a willingness to finally settle the broad question of whether same-sex couples should be treated equally to heterosexual couples.

She noted that the Supreme Court waited until the last minute — its decision had initially been expected on Nov. 30 — to decide to take the cases: “They took a long time, so clearly they’re wrestling with it.”

Like many observers, Harris speculated that Justice Kennedy is the likely swing vote if the court reaches a 5-4 ruling on the issue, and some have speculated that Chief Justice Roberts could also be a surprisingly liberal vote on the issue, as he was earlier this year in upholding Obamacare. And the advocates say their optimism is reinforced by the long and meticulous case for marriage equality that advocates put together in the courtroom of federal Judge Vaughn Walker, whose 2010 ruling the Ninth Circuit upheld.

“We worked really hard to put in the best possible case,” Stewart said, while Herrera said, “I can think of no better case to take up than this case…The confidence level of all of us is high.”

Yet even if it turns out that there are a few more turns to navigate before justice prevails on what Harris called “the civil rights struggle of our time,” the advocates are pledging to win marriage equality in California next year, even if that means going back to the ballot. “We’re going to win this fight one way or another,” Sup. Scott Wiener said at the press conference, with Sup. David Campos later adding, “the question is whether the Supreme Court chooses to be on the right side or history or the wrong side of history.” It was a theme that Lt. Gov. Gavin Newsom — who started us down this path with his unilateral decision as mayor to issue marriage licenses to same-sex couples — echoed in public statement he released: “Today’s announcement starts the clock towards the final decision for California. History will one day be divided into the time before marriage equality and the period that follows. And thankfully, we will be on the side of history worthy of being proud of.”