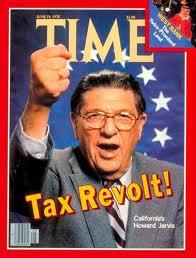 Is it really possible? Could California be on the path to repair the damage of Prop. 13? Would Jerry go along?

You wouldn’t think so — it’s been talked about for so long and so little has happened. But it’s an all new year in Sacramento, and the era of Republican dominancy-by-minority is over (in fact, the era when Republicans will have any role at all in state government is pretty much over), and already, some changes are in the works.

“Prop. 13 is not the untouchable third-rail anymore. It’s more like the bad guy with the mustache who has tied California to the rails with the fiscal train wreck coming.”

Ammiano is introducing legislation to change the way Prop. 13 is interpreted — to stop corporations for using loopholes to get around paying higher taxes after commercial property changes hands. But the polls now suggest the voters might be willing to do more — the Public Policy Institute suggests that a sizable majority of Californians would like to see a split-role measure approved. That alone would provide billions of dollars in revenue for public schools.

By a 57-36% margin, voters responded positively when asked this question: Under Proposition 13, residential and commercial property taxes are both strictly limited. What do you think about having commercial properties taxed according to their current market value? Do you favor or oppose this proposal? Democrats favor the idea 66-26% and independents like the prospect 58-36%. Even Republicans are evenly divided 47-48%. Voters aged 18-34, who represent the future, favor the idea 65-28% but the idea is also popular among the most reliable voters, those 55 and older, by 56-39%. Splitting the tax roll is a popular idea in every region of the state, among men and women equally and especially among Asians (65-26%) and Latinos (58-36%) but also among whites (56-38%).

Now: That’s before the commercial property industry and every major landowning corporation in the state pours about $50 million into a campaign to defeat any whisper of a split-roll. But we all know that big-money campaigns don’t always win in California — and right now, the guv is a pretty popular guy. So if he got behind a split-roll measure, and every progressive and labor group in the state (and most local elected officials) did, too, it would be at the very least a level playing field.

That, alone, would change California more than anything else the Legislature or the governor could do. It’s out there; it’s possible. I wouldn’t try in 2013, but 2014 is looking pretty good.