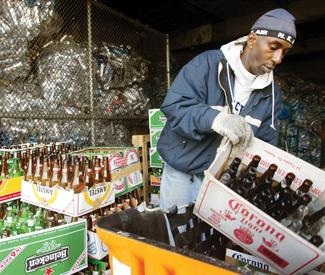 The eviction of the Haight Asbury Neighborhood Council’s recycling center, which critics of the center said was scheduled to take place Dec. 5, hasn’t happened – and it’s entirely possible that the center could keep operating for several more weeks.

At the end of the day Wednesday, the doors were open, the center was continuing business as usual – and the office of Sheriff Ross Mirkarimi, who is charged with carrying out the eviction, was telling reporters that Dec. 5 was never a firm deadline.

Kathy Gorwood, Mirkarimi’s chief of staff, told us that the law gives tenants five days from the service of an eviction notice before any law-enforcement action can take place. “But that’s not a legal mandate that we evict on the sixth day,” she said.

The notice was served Nov. 30.

Gorwood said all evictions are planned with officer safety, tenant hardships and staff scheduling in mind – and on Dec. 5, the sheriff wasn’t ready to move.

Gorwood said Mirkarimi wasn’t defying the law or refusing to carry out the eviction. But since there are likely to be protests, possibly civil disobedience, the deputies need to be prepared and the schedule set carefully.

Mirkarimi has a history of supporting HANC. As a former supervisor of District 5, which includes the Haight, he voted to urge SF Rec and Park to and find a solution to keep the center in Golden Gate Park. The vote was nonbinding. He clearly wants to avoid a nasty confrontation, and if he can find a way to work out a voluntary move-out, it’s likely he’ll take the time to negotiate it.

For the past ten years, The Department of Recreation and Parks has aggressively sought to oust HANC.  Finally, this fall, Rec-Park filed an eviction through the City Attorney’s Office
Interestingly, the “Notice to Vacate” served on the center was signed off by the City Attorney’s Office on September 14, 2012. However, the actual eviction date that SF Rec and Park requested was December 5, 2012.

Why wait three months to evict a center that Rec-Park has been trying to get rid of for a decade?

Jack Fong, a spokesperson for the City Attorney’s office, declined to say if there were any procedural or administrative reasons that an eviction notice given to the sheriff in September would take three months to go through.

We called Phil Ginsburg, director of Rec and Parks, and Sarah Ballard, its spokesperson, to ask about the time disparity. We did not hear back from them before press time.

But you don’t need to be a genius to figure it out — just look at what was happening in November. Ginsburg was pushing Proposition B, which secured $195 million in bonds to shore up neglected playgrounds and open spaces in San Francisco’s parks. The measure needed a two-thirds vote – and Rec-Park was nervous about any bad publicity.

The measure passed by a landslide. Butousting HANC, eliminating a revenue stream for the poor, the homeless, and working class people, would have been bad publicity leading up the November election.

The Small Business Commission is scrambling to notify businesses in the area of their possible new role without the recycling center — they could all either become mini-recycling centers, or
face a $100 a day charge from the state of California.

Exactly how and when the commission will reach out to those affected will be discussed at the Small Business Commission’s December 10 meeting.

Regina Dick-Endrizzi, the executive director of the Small Business Commission, told us that one business in the SOMA, which she declined to name, faced three months worth of the $100-a-
day charge for not buying back recyclables from the state while trying to navigate applying for an exemption. Even after being granted the exemption, that’s a $9,000 charge, which for a small
liquor store or grocer is not chump change.

There’s a precedent for a San Francisco sheriff refusing to carry out an eviction notice. Sheriff Richard Hongisto, who later served on the board of supervisors for three terms, famously
refused to evict the Filipino and Chinese elderly tenants of the International Hotel in 1976. The scandal was even the subject of a documentary, “The Fall of the I-Hotel.

The International Hotel was sold to developers who were going to cast the elderly tenants out onto the street. News outlets as far flung as the New York and LA times wrote about the
mass eviction, and many consider it a black eye on San Francisco to this day.

In January 1977, Hongisto was jailed for five days for his refusal to evict the tenants. Eventually, he relented, leading a team of SWAT and other officers to clear the hotel of
protesters, and even swung an ax himself to bust open the hotel.

But this is a different situation: Mirkarimi hasn’t refused to follow the law, and in fact, Gorwood said that he has every intention of carrying out the eviction. The law, Mark Nicco, assistant counsel to the sheriff, told us, only says that an eviction has to happen in a timely manner – and there’s no definition of what that might be.

So if Ginsburg or the mayor think Mirkarimi is dragging his feet, the only recourse would be for Rec-Park to go to court and seek a judge’s order compelling the sheriff to evict the center in a stated period of time. All of which could take weeks.

So for the moment, HANC is still in business, Mirkarimi is avoiding an ugly eviction scene – and there’s still a chance for Rec-Park to come to its senses. But we’re not taking bets.