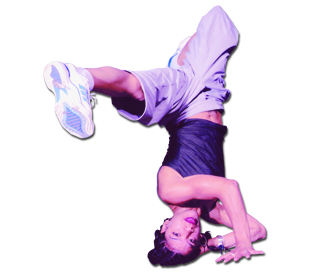 DANCE Marc Bamuthi Joseph, Yerba Buena Center for the Arts’ new Director of Performing Arts, received thunderous applause even before he had said a welcoming word to the capacity crowd in the venue’s lobby. Such is this exceptional artist’s charisma. When he told them that he wanted YBCA to become accessible to people who in the past may not have felt welcome there, they roared. It was to be that kind of evening.

For “Clas/sick Hip Hop,” Bamuthi’s first program in his new position, he drew on what he knows so well — not just hip-hop as dance, but as a culture that has spread around the globe. Still an essentially urban genre, it started as a popular expression that is moving from the community into the concert hall. It’s how dance genres have always evolved, from India to Egypt to France. For the time being, hip-hop seems to thrive in both places.

While San Francisco’s yearly International Hip Hop DanceFest has a rich tradition of presenting theatricalized versions, Bamuthi went back to the origins of the art as an essentially social practice. He structured “Clas/sick” in two parts: the first half as a dance party with guest artists freestyling, the second half based on more formalized “battles” between individual practitioners.

If anybody still needs convincing of hip-hop’s potential as an expressive dance language, “Clas/sick” made as good a point as one could wish for. This sextet of bravura performers mesmerized without theatrical accoutrements, just working with music, a torso, and four limbs. They seemed to ignore physical restrictions such as gravity, balance, time, or verticality. No ballerina can slither in her toe shoes as they did in their sneakers. And who has ever of supporting turns on an ankle? While many of the moves — head spins, backspins, windmills, popping and locking — looked familiar, these soloists rethought the basic vocabulary and made them their own.

<P>Levi Allen (a.k.a. I Dummy), the 19-year-old obviously joint-less virtuoso from Oakland, dances the Oakland street-derived style Turf, while Marquesa “NonStop” Scott, who manipulates time from super slow and superfast, performs Dubstep. Arthur “Lil Crabe” Cadre turns himself into pretzels while hopping on one hand. I was previously unaware of what “Memphis Jookin” is — but it was clear that Ladia Yate’s platform shoes were a health risk even just standing, let alone dancing in them. (Sensibly she later safeguarded her feet in sneakers.) As for Ana “Rokafella” Garcia, she magnificently overcame gravitational pull by shooting horizontally along the floor only to rock up as smoothly as a tree righting itself.

But none of these physically virtuosic performers approached the depth of Rennie Harris, who some 20 years ago started the move towards developing choreographic structures that make hip-hop more than an expression of individuality. He no longer pops and locks as he used to, but he remains enthralling, with split-second mood shifts from rage to vulnerability, aggression to pride, and fatigue to full power ahead. Harris’ performance impressed the sense of a human being as complex and indomitable.

In the first half the audience danced lustily — so much fun to watch — to DJ Elan Vytal’s spinning, while the professionals brought in their own tracks. For the battles, Matthew Szemela took his fiddle to places where I didn’t know it could go. It’s not clear whether these hip-hop performers had ever faced each other, but here they had to step beyond themselves and relate to a partner. They approached each other wearily much as they might on a street or a boxing arena, throwing out challenges and invitations, finally coming to an understanding (or not). Scott and Allen’s sliding and toe moves were reminiscent of ice skating, while Cadre’s duet with Garcia came as close to a courting encounter as you are likely to find in hip-hop.

It remains to be seen where Bamuthi intends to take the performing arts at YBCA. One thing is clear: he recognizes excellence when he sees it. He also throws a helluva a good party. *