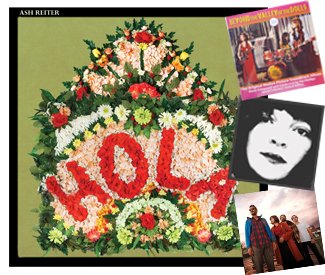 Tofu and Whiskey The phrase “‘woman’ is not a genre” has been popping up again. It’s been in articles, board threads, and subsequently, conversations I’ve been a part of. It’s a good one. Kind of an earworm of a saying, because on its face, it’s implicit, simplistic, obvious, even. But it’s a good mantra, for music writers. “Woman” is not a genre.

Maybe it’s a backlash against Rolling Stone’s recent, ridiculous “women who rock” package, which sought out the “best” woman in rock with votes from readers, and somehow ended up with cloying pop act Karmin plastered across the cover, cleavage-y as all Rolling Stone cover ladies. Can you imagine a “best white guy in rock” contest in RS?

But this is nothing new. As far as I can trace it, Little Boots said “‘girl’ is not a genre” in 2009, but — seeing as how it’s so gosh darn simple — it’s got to have been uttered previously, and certainly, undoubtedly, felt since the first time a woman picked up a different instrument from her female neighbor, and got thrown in concert together.

It was the headline and thesis of a piece on Electronic Beats about the rise of thinkpieces sputtering about a supposed rise of women making electronic music, another fallacy; it’s just the cheap shots in feature pieces clumping heterogeneous acts together again.

One of the only things linking all ladies of wildly divergent sounds at this point is the gendered showcases, or gendered comparisons. That’s not to say all comparisons are entirely inaccurate, they just frequently are made based on little more than appearance.

Ash Reiter, the frontperson for her eponymous East Bay band, saw plenty of comparisons after the release of her first album, Paper Diamonds, in 2010, with passing references to Fleetwood Mac and Cat Power, both of whom she admires. The singer-songwriter-guitarist was also hoping to sound like a mix of Paul McCartney, Brian Wilson, Grizzly Bear, and OK, Jolie Holland.

Now, Reiter and her band have taken that sound for a walk in another direction. With the new LP, Hola — which see release on 20 Sided Records Fri/30 with a show at the Rickshaw Stop (8:30pm, $10. 155 Fell, SF. www.rickshawstop.com) — the local musicians took notes more from bubbly 1960s pop and classic Motown cuts, arrangements interspersed with bits of funk and Afro-pop.

“With our first album, I was in a folkier place with a lot of those songs, doing the Jolie Holland thing, which, you know, I cut my teeth singing along to her songs,” says Reiter, remarkably cheerful on the phone the afternoon before her current 54-day tour ends. “But I’ve gotten more excited about writing more upbeat pop songs with grooves to them, and working with my band to write music instead of writing it alone.”

On this tour, Reiter and her drummer Will Halsey went to the Motown Museum in Detroit, which was particularly meaningful because of its influence on Hola: “that’s a lot of the music we look up to. Of course, [we’ve always looked up to] the Beatles and the Beach Boys, but also all these girl groups, the Ronettes, and the Shirelles, and the Crystals. And we definitively imitated a lot of what we heard in the background vocals listening to the Supremes.”

She had just gotten the Supremes box set, but also was listening to early Nigerian pop, and Os Mutantes when she first began work on Hola, and brought those inspirations to New Improved Recording, where the band worked for the first time with engineer Carlos Arredondo, who they met at a party at Anna Ash’s house.

You can hear Ash Reiter’s many complimentary influences on Hola opening track, “I’ve Got Something I Can Laugh About Now,” with jangly guitars, shakers, cooing harmonies, and Reiter’s crystal-clear, honey-sweet lead vocals. Funkier, electro-shot “Ishi,” written about the last member of the Yahi, very much a part of California’s history, follows. Reiter read his biography for that song, but also just liked the phonetic sound of his name.

Raised in Northern California (specifically, Sebastopol), Reiter looked to the state’s history for inspiration lyrically this time around; the former modern lit major was reading voraciously during the making of the record, including Joan Didion’s Where I Was From. The song “Little Sandy” has a chorus that’s a quote Didion included from a pioneer girl’s diary.

While Hola was girl group-influenced, Reiter wasn’t about to write a break-up album — she’s dating the band’s drummer, Halsey, who also plays with Oakland’s the Blank Tapes.

Local singer-songwriter Jessica Pratt just released a mystical, fleeing-through-a-foggy-forest folk album that’s so stripped down, quavering and personal, crackling yet crisp, it sounds like a rare, weird gem from the early ’70s that you’d unearth in the lower racks of Amoeba. The self-titled LP has such a true-blue timeless quality, however, to call it a throwback would do it injustice. White Fence’s Tim Presley is said to have created new label Birth Records solely to release Pratt’s debut, which came out Nov. 13. Pratt recently told Fader: “I was really afraid of some freak-folk comparisons because I’m from San Francisco, and I play electric guitar, and it’s kind of weird, folky stuff.” I’ll refrain.

TALES FROM THE FRONT LINE

Part of Nayland Blake’s ongoing FREE!LOVE!TOOL!BOX! exhibit, Show and Tell: Queer Punks in Conversation will include conversations with Leslie Mah of Tribe 8, Brontez Purnell of Gravy Train!!! and The Younger Lovers, Jess Scott of Make-A-Mess Records, Brilliant Colors, Index, and Flesh World, and Matt Wobensmith, founder of Goteblüd Vintage Zine Store and Outpunk. Full disclosure, the panel discussion will be moderated by SFBG managing editor, Marke B., but I’d have gone regardless.