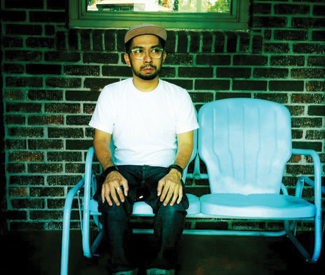 SUPER EGO What’s the biggest, actually good DJ gig you can think of? Festivals, of course: Glastonbury, Sonar, Mutek, those insane-looking events inside that arena in Amsterdam with the indoor fireworks.

But how about being able to drop some serious soul classics for a crowd of 80,000 at a party that will go down in history, one being broadcast on pretty much every TV station in the world? Right about the time Shalamar’s “Second Time Around” ignited a field of tiny waving flags and old school hustle at Chicago’s McCormick Place on the night of Nov. 6, I and many others were blasting out tweets like producer Mark Ronson’s: “Seriously, who is DJing OBAMA HQ? incredible. Teena Marie, MAZE etc….every global news station is blastin’ Frankie Crocker classics.”

The legendary DJ Frankie Crocker rode a white stallion into Studio 54 in the 1970s. On TV in 2012, DJ Mel (www.djmel.com) was soundtracking Obama’s ride into a second presidential term. And Mel wasn’t holding back on the sexy slow jams and up-to-the-minute re-edits, either, waybacking a gloriously colorful Chi-Town crowd — and some teary-eyed people watching at home, anxiously awaiting election results while retracing some old school dance steps. (When it comes to politics, I apply my nightlife philosophy: why stop at two parties when you can have seven? Still, to see and hear the “real America” that I grew up with put forth to the world was something else.) As for the Romney party, sad trombone: left with only the rights to Kid Rock and Toby Keith, they chose to just blast Fox News instead, honk honk.

“This sounds ridiculous, but I really didn’t realize the enormity of what was actually happening until I got home and watched the whole thing on YouTube. I’m still wrapping my head around it,” DJ Mel told me on the phone a couple days after the election from his home in Austin. (Mel’s friend, supercute local DJ Jeffrey Tice, had hooked us up for an interview.) “For me, I had to focus on it like it was a regular gig: get my accommodations and travel set, which they took care of, check my equipment, get to the venue on time, be a professional. I did get kind of an idea of everything once we did the soundcheck in this huge venue, and then when the crowd was piling in. But I was too busy concentrating on keeping the vibe going.

“I mean, the pressure was on, too — if I played a bad song, it wouldn’t just clear the dance floor, it would actually reflect on the President of the United States,” Mel laughed.

“There was one moment of revelation, though. When the results were announced, I was jumping up and down. I was nervous he would lose — in the beginning I thought, ‘Woah, this isn’t looking good, and the recount may go on for weeks.’ But then they said he won. And there I was with the entire world’s press corps behind me …. and no idea what I was going to play. I looked down at my computer and thought, ‘this song is awesome.’ It was the Beatles’ ‘Twist and Shout.’

“As soon as that song came on, the production guys around me started breaking into these huge grins. Then this ginormous, incredibly diverse crowd went bananas, singing along. That was a really special moment for me. There I was in Chicago, recreating this iconic moment from Ferris Bueller. I took a look around and thought, ‘ho-lee … this is kind of huge.'”

The rest of the playlist that night was mostly Mel’s own. “They gave me a list of 30 or so songs, but I went through them pretty quickly and dove into my own playlist of songs I love, that I thought were uplifting and fun. I didn’t prepare at all, just went with my instincts to turn this thing into a party. You’ve gotta just pick songs that are relevant to the event and trust what you’ve got.”

OK, so here’s a question: What would Mel have played if Obama had lost? “Oh man, I didn’t even want to think or ask about that!”

The young Mel, one of the most down-to-earth DJs I’ve ever spoken with, has plenty of experience and has already experienced a couple cycles of fame, with gigs at Lollapalooza (a clip he posted of the crowd from 2009 makes me giddy with joy), Austin’s ACL fest, and several world tours. “I’ve been through every phase of music, from crazy industrial and acid house to indie rock and freestyle, so I’m confident enough to know I can move the crowd in different situations. But I was traveling so much, I just got tired of touring, of not knowing anyone personally where I was playing. So I kind of dialed back.”

That dialing back took the unexpected turn of becoming the house DJ for huge Democratic Party events — first the California convention earlier this year in Sacramento, then the national convention in Charlotte, and now this (no word yet on inauguration dance floor plans, however.) “I have a friend who’s really involved in the planning who hooked me up,” Mel told me. “I think they realized that the music was becoming a big aspect of these events, especially when there so much waiting around for things to happen, or moments in-between to fill. It’s a good way to keep things going and relate to people.”

He may have to dial it back up now, though. “There was zero cell phone coverage in the venue at all, because it was overloaded. But as soon as I got out, my phone literally exploded with texts and notifications. My Twitter count jumped a couple 1000. I think people were genuinely shocked that it was an actual DJ at the event. I think beyond what came to me from it, this was a major thing for DJing in general. Turning an event like this into a party, that’s kind of a big deal.”