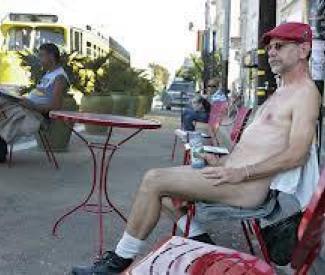 Over the objections of progressive supervisors and under threats of a lawsuit from nudists and civil liberties advocates, the San Francisco Board of Supervisors today voted 6-5 to outlaw public nudity in the city. Supervisors voting against the ban were David Campos, Christina Olague, John Avalos, Eric Mar, and Jane Kim.

Sup. Scott Wiener, who sponsored the measure, cast it as a last resort to deal with what has become daily displays of nudity in the Castro district he represents (and most recently around City Hall as his legislation was being considering in committees), noting that, “Public nudity is part of San Francisco and is appropriate in some circumstances.” His legislation makes exceptions for permitted events such as the Folsom Street Fair and Bay-to-Breakers.

But Wiener said that “public nudity can go too far,” as he says it has over the last two years in the Castro’s Jane Warner Plaza, and that “freedom of expression and acceptance does not mean you can do whatever you want.”

Campos echoed some of the legal concerns that critics of the legislation have raised, noting that, “As a lawyer, I do worry about when you ban specific conduct and then you have exceptions to that.” He also questioned whether Wiener has done enough to try to mediate the increasingly divisive conflict he’s been having with the nudist community and whether this was an appropriate use of scarce police resources.

“I don’t believe we’re at the point of saying this becomes a priority over violent crime,” Campos said, noting that he’s been unable to get more police foot patrols to deal with a recent spate of violent crimes in the Mission, which shares a police station with the Castro.

Avalos said it was absurd to focus city resources on this victimless issue when the city is wrestling with far more serious problems, such as poverty and violence, and he played a clip from the film Catch 22 where a soldier goes naked to a ceremony to highlight that absurdity. “I will refuse to put on this fig leaf, I just can’t do it,” Avalos said.

Mar said he sympathized with Wiener’s concerns, but agreed with Campos that Wiener could have done more to mediate this situation before both sides dug in: “I really don’t think we need citywide legislation, particularly overbroad legislation, to deal with a problem isolated to one neighborhood.”

Wiener seemed stung by the comments and said he could cite example of each supervisor pushing resolutions or ordinances that dealt with similarly trivial issues, comparing it to refusing to deal with a constituent’s pothole complaint until that supervisor fixed Muni and solved the city’s housing problem. But Campos pushed back, calling the comparison ridiculous and saying there was no reason for a citywide ban to deal with such an isolated issue.

Nudists at the hearing reacted angrily to the approval and started to disrobe before President David Chiu ordered deputies to intervene and abruptly recessed the hearing. Now, it will likely be up to the courts to decide whether Wiener’s concerns about weiners can withstand legal scrutiny.