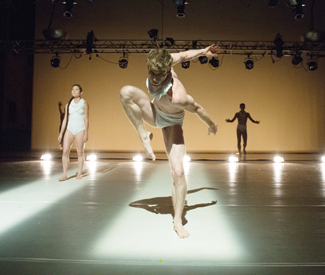 DANCE The tenth anniversary concert for Benjamin Levy’s LEVYdance Company should have been an occasion for looking back a little and glancing into the future a lot. The fact that this was a subdued, at-time depressing event was certainly not the dancers’ fault. They were fabulous, crackerjack performers: fierce, fast, and committed, whether in solo passages or in ensemble work. If you watch dance primarily because of its performers, this was your night.

Where the program fell short was in choreography that would stay in your mind beyond its ephemeral existence on stage. Instead of showing a work that would hint at where he might be going in the next decade, Levy chose to present two pieces from the past. Good as they were, they gave the unfortunate impression that he is a one-note choreographer. He is not. One of the reasons this choreographer has been a pleasure to watch over the years is because he tries to find new vehicles for his volatile and fractured vocabulary. Despite their surface appeal, an undercurrent of violence and danger often propels Levy’s choreographies. It’s what keeps you on the edge of your seat.

It’s with the stunningly tight Falling After Too that Levy introduced himself as choreographer in 2003. Performing it himself at the time, he was partnered by a much heftier Christopher Hajin Lee. The up and down of this contest between will and muscle was partly based on the two men’s different physicalities. Reprised as a duet between Yu Reigen and a slender Paul Vickers, it inevitably shifted the focus onto a male-female relationship. It’s a sign of the work’s choreographic strength — and the performance, including Anthony Porter on piano — that it worked as well as it did.

But why did Levy program Physics (2008), which is essentially an elaboration for two couples of that earlier work? The sequential and overlapping duets, including switching partners, didn’t really tell us much about these couples. Still, Levy has an appealing way of including tiny gestures — a pat here, a kick there — in the muscularity of these ever-shifting encounters. They suggested a sense of spontaneity not unlike the grace notes in a piece of music.

And why Levy chose Sidra Bell Dance New York to collaborate on this concert remains a mystery. What on earth did he think his company — such as it is — could learn from Bell’s? Robert Moses’ Kin introduced her last spring when she set a modest quartet on his female dancers. Here the New York-based artist created less for Levy, and Nudity for her own dancers. Bell knows a good thing when she sees it; she sent her dancers behind the screen, up the walls, and into the audience. She took advantage of ODC Theater’s vaunted lighting possibilities, lowering and tilting levels of the grids in less and having a bank of floor lights shine directly into her audience in Nudity. Maybe turn-around is fair play since that’s what performers have to deal with on a daily basis. But there was something offensive about the approach that left my seat neighbor with a fierce headache and a fiercer fury.

Bell is a complete creature of the theater. Interestingly, she takes credit as “director” instead of “choreographer” of her works. One thing is certain: she is big on image making — whether they come from Glamour or “girlie” (and their male counterpart) magazines. And the accoutrement of these two dance theater works looked promising; the dancers in less wore flimsy whites with big, noose-like scarves, and in Nudity they went Goth — mohawks, black outfits, and fright make-up.

Spectacle, in-your-face aggressiveness, a contempt for continuity in favor of the moment, and raw and supposedly unmediated energy seem to be the elements that fascinate Bell. That’s fine and good, but these practices need to arise from ideas that suggest more than clichés. A man crawling on all fours? Throwing people and catching them — sometimes? Retching to some comment on nutrition — in French? Dominatrixes in both pieces?

The ferocious physicality of Bell’s dance making is its most attractive quality, but the imagery — and she uses a lot of it — has to accumulate into something bigger than its constituent parts. Otherwise why do it? Both of Bell’s works fell short that way. They left behind a sense of ennui and déjà vu.