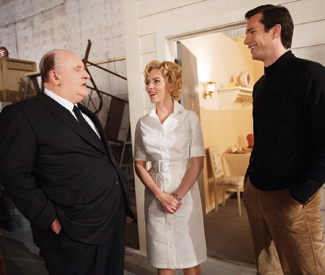 FILM If there’s one thing Hollywood loves more than a biopic, it’s a biopic about someone in showbiz. (Well, OK — first choice is probably someone in politics. But showbiz is a close second.) How better to explain the praise lavished on last year’s mediocre My Week With Marilyn? In retrospect, Marilyn‘s most intriguing element was not Michelle Williams’ decision to go with padding rather than weight gain, it was the scenes filmed backstage at Pinewood Studios, affording viewers a glimpse of what the real Marilyn’s workplace might have looked like.

Movie magic in the making is a theme in Hitchcock, too — another biopic about an instantly recognizable celebrity viewed through the lens of a specific film shoot. Here, we have Anthony Hopkins (also sporting padding, one assumes) playing the Master of Suspense, mulling over which project to pursue after the success of 1959’s North by Northwest. Even if you’re not a Hitch buff, it’s clear from the first scene that Psycho, based on Robert Bloch’s true crime-inspired pulpy thriller, is looming. We open on “Ed Gein’s Farmhouse, 1944;” Gein (Michael Wincott) is seen in his yard, his various heinous crimes — murder, grave-robbing, body-part hoarding, human-skin-mask crafting, etc. — as yet undiscovered. Hitchcock, portrayed by the guy who also played the Gein-inspired Hannibal Lecter, steps into the frame with that familiar droll greeting: “Guhhd eevvveeeening.”

And we’re off, following the veteran director as he hunts for new material, determined not to repeat himself and to stay relevant, despite a softened image thanks to his successful TV show. “What if somebody really good made a horror picture?” he muses, and though his wife and collaborator, Alma (Helen Mirren), cautions him against doing something simply because everyone tells him not to, he plows ahead for (partially, it seems) that reason. When he strikes a deal to finance the film himself — because the studio disapproves of its content, much like the censor board will, in an era when showing a toilet flushing onscreen was nearly as scandalous as a shower murder — Psycho becomes even more personal. His reputation (and his continued ability to live in a fancy house and fund his foie gras habit) teeters in the balance.

The filmmaking scenes are fun to watch, peppered with behind-the-scenes moments detailed in Stephen Rebello’s Alfred Hitchcock and the Making of Psycho, the inspiration for John J. McLaughlin’s script. Also important is the contrast between Hitchcock’s contentious relationship with Vera Miles (Jessica Biel) — his onetime protégé who’d dropped out of 1958’s Vertigo due to pregnancy, to the director’s supreme annoyance — and his warm interactions with Janet Leigh (Scarlett Johansson, working hard but perhaps too recognizable to be playing such an icon) and Anthony Perkins (Cloud Atlas‘ James D’Arcy, an uncanny match for Norman Bates).

Hitchcock avoids shot-for-shot replications of Psycho scenes — been there, Gus Van Sant’ed that — but there’s a particularly vivid re-enactment of filming the infamous shower scene. When the knife-wielding stunt double playing Mrs. Bates isn’t slashing vigorously enough, Hitch himself steps in to elicit the proper level of terror from Johansson-as-Leigh’s Marion Crane. There emerges the demanding, perfectionist tyrant suggested by sources beyond the Rebello book; most recently, the made-for-HBO film The Girl featured a particularly lecherous Hitchcock (Toby Jones) as cruel, sexually harassing boss to Tippi Hedren, star of Psycho follow-up The Birds (1963).

But Hopkins’ Hitch offers nothing so extreme, aside from gentle leering at his leading ladies’ ample assets — still enough to make Alma Hitchcock (“a smart, shrewd lady who had a lot of influence over him,” the book praises, in one of few mentions of her) cringe. Feeling overlooked, she begins spending time with the unctuous Whitfield Cook (Danny Huston), a writer who’d worked on Hitchcock’s 1951 Strangers on a Train, but whose current project is the shudderingly-titled Taxi to Dubrovnik.

As the film’s tagline — “Behind every Psycho is a great woman” — suggests, the relationship between Alma and Hitch is, stubbornly, Hitchcock‘s main focus. While Mirren is effective (and I’m all for seeing a lady who works hard behind the scenes get recognition), the Whit subplot exists only to shoehorn more conflict into a tale that’s got plenty already. We can tell Whit is a sleaze from the moment he appears, but the film insists on having him hang around, lure the attention-starved Alma out to his beach house, etc. If this were a real Hitchcock movie, the ruthless director would’ve excised this go-nowhere drama from his first-draft storyboards.

Elsewhere, however, Hitchcock director Sacha Gervasi — making his narrative debut after hit 2008 doc Anvil: The Story of Anvil — shows stylistic flair, working Hitchcock references into the mise-en-scène (lots of birds), and echoing Psycho‘s themes (Hitch as voyeur, peering through window blinds and peepholes) and symbolism (the first time we see Alma, she’s wearing white undergarments, much like our initial glimpse of Marion in Psycho). There are comedic moments that spring from Hitchcock’s own dry wit and canny grasp of showmanship, as when he invites the Hollywood press over to his house to discuss his new project — then proceeds to solemnly pass around gruesome Ed Gein crime scene photos. (Gein pops up throughout the film as a kind of Hitchcock inner demon; clever, but the device gets old quickly.) Also nice: Hitch’s reaction to the audience‘s reaction at Psycho‘s first public screening.

Hopkins, all things considered a pretty obvious casting choice, is 74 — nearly 15 years older than Hitchcock was in 1959 — and is helped along to that famous profile with prosthetics. But his portrayal of the Master renders the great man a likable but flawed artist: still determined to improve his craft after decades in the biz (Psycho was his 47th film); anxious for approval (he finally won an honorary Oscar in 1968); and a consummate professional on-set — but fond of studying hot-young-thing headshots a little too closely in his home office. And while Hitchcock may not best the political biopic that’s its current box-office competition, Lincoln (nor will Hopkins likely upset Daniel Day-Lewis on any award-show podiums), it’s miles better than another Hopkins-starrer in that vein: 1995’s Nixon.