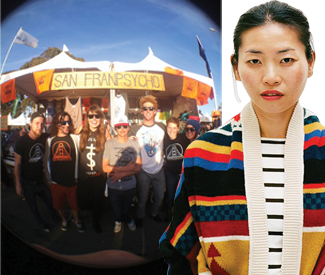 STREET SEEN “People were like, we wanna wear some clothing from you guys,” San Franpsycho owner Christian Routzen tells me from the behind the counter of his DIY brand’s newish (it’s seven months old) location on newly-trendy Divisadero Street. “But we didn’t make clothing.”

I guess sometimes the brand just comes first, and then the product. Or rather, the movie comes first. Routzen made a 2001 Ocean Beach surf film with cohort Andy Olive called, yes, San Franpsycho. Apparently the flick, along with its 2005 follow-up San Franpsycho: Wet and Wreckless, captured the imagination of certain sector of San Francisco. They wanted T-shirts, so Routzen and Olive located some silkscreening gear and a mail truck and became a presence at Indie Marts, bars, and street fairs, silkscreening clothing with their bon mot. I’ve seen them do it, they get slammed.

“We had people taking off their shirts. Men, women, and children,” concludes Routzen. People resonated with the name, he says.

A couple of bangin’ blonde girls interrupt our conversation to buy wristbands for the surf fashion show the brand is hosting at Public Works that night. Later, I see a shot on Instagram involving a runway, a lot of thigh-high American Apparel tube socks, and bikinis. That same weekend, San Franpsycho was hosting a surf tournament and a poker competition.

The girls recede into the distance, banded. And then a guy interrupts us asking about customizing an aqua sweatshirt, as if to complete the San Franpsycho milieu I’ve found myself in the middle of.

But I kind of want Routzen to spell it out. “Can I ask you a less tangible question? Why’d they want to wear clothes from a bunch of guys that don’t make clothes? It’s all the name, really?”

Routzen shrugs, and hands me a DVD copy of Wet and Wreckless ($20, buy a copy at the store.) I watch it with my roommate the next night. It is a Jackass-paced piece of San Francisco bro-moblia, featuring gentlemen named Simo, Doobie, and Brownie, guys bouncing their penises while frying hot dogs in the kitchen, claymation sex, girls making out, an Ocean Beach parking lot shooting, a broken surfboard montage, and an incoherent interview with Andy Dick. Also: barrel rolls.

Most of the SFP dudes are pretty hot, they surf gnarly OB waves, and they straight-boy don’t give a fuck. Ding ding ding! Well yeah, obvs everybody wants San Franpsycho to rub off on them.

Which is a totally unfair analysis, because Olive and Routzen have (in addition to being attractive) created a real cute, real-real, repurposed wood retail galaxy. The Golden Gate Bridge-San Franpsycho logo can now be found on man-tanks, lady tanks, dog sweatshirts, boy shorts, hoodies, aprons, duffel bags, water bottles. The machines they’re printed on are clearly visible in the shop’s workspace.

The boys also sell a host of products made by buddies who live in the immediate neighborhood. The ginger-Afroed Olive holds up an expanse of black Cordura nylon, excitedly gesturing at a bank on the wall of the classic roll-top, leather-strapped Motley Goods backpacks (also available on Etsy) that it will be made into. That brand’s based out of their friend’s apartment, Olive says. “Literally, two blocks away.” The shop also stocks Sea Pony Couture (sea-pony-couture.myshopify.com), a line of delicate gold-chained, be-charmed jewelry by San Franciscan Fatima Fleming.

Far, far away from the San Franpsycho clubhouse sits a Noe Valley clothing store that has absolutely zero hot men in it, but managed to pull me in on the strength of its color palette alone (I am, at my heart, a primary shades kind of person. This is Atlantis and I’m like, nautical.)

I was back in the dressing room trying on my Japanese striped/solid BlueBlue boatneck dress, silk drawstring pants with daisy motif by Janezic (a line designed by Michele Janezic, Mill’s store manager whose drapey tank tops are a touch more club-ready and sexy than the rest of Mill’s offerings), and high-waisted, below-the-knee, A-line Levi’s denim skirt.

“I just can’t believe this! It’s amazing,” went the raptures. I should mention that Mill is the brand-new female wear offshoot of beloved Castro store Unionmade. Unionmade was recently dinged by Gawker because its clothes are not, sadly, union-made. Nonetheless, its collection has garnered an enthusiastic following among those who swoon for spendy, high quality denim and other rugged forms of fashion. These followers included females, leading to the birth of Mill, which carries some unisex items in addition to female items from the same brands as Unionmade.

“The philosophy of Mill is to offer classic, quality, and timeless products,” Janezic told me in an email after my visit (I didn’t cop any of the items I tried on, but that was more a question of insufficient funds than personal proclivity because I wanted them all very badly. Even the Barbour “Morris” waxed utility jacket that seemed like a must-have for the drippy SF winter was $379, so I guess I must not-have it sob.)

But I’ll tell you this: if Mill ever needs someone to watch the store at night, say curl up on a pile of goldenrod Levi’s wool trenches lined with poncho material next to its stacks of design mags, wake up in the morning and go out brand representing in some Imogene + Willie jeans (this is cute — manufactured in Tennessee by a twangy couple who started in a gas station basement and still get their fabric from one the country’s last and oldest denim factories) and Gitman Bros. gingham button-ups…

… well, at least now they know my name.