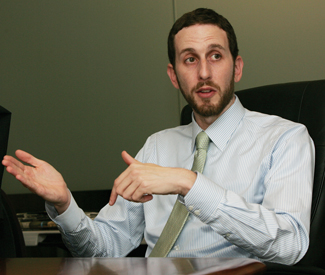 CORRECTION: This article has been updated to correct a statement from Sup. Scott Wiener about affordable housing.

Sup. Scott Wiener is proposing a dramatic overhaul of the city’s environmental review process that would limit the ability of citizen activists to appeal projects and could ease the path for major developments.

The new rules — some of which are fairly simple and routine, others more far-reaching — cover the city’s interpretation and implementation of the California Environmental Quality Act (CEQA), the state’s venerable land-use and environmental oversight law. The legislation is before the Planning Commission and could reach the supervisors in December.

According to city staff and outside analysts, the Wiener proposals would:

• Eliminate the public’s legal right to appeal a ruling by the Planning Commission if the Board of Supervisors has to approve any part of the project.

• Weaken the standard for environmental review by city planners.

• Speed up the process for developments by compacting the time frame for CEQA appeals.

“Generally, the amendments decrease the opportunities for individuals and community groups with serious environmental concerns to provide input and assert influence on development projects as part of the CEQA process,” an analysis by Community Economic Development Clinic at Hastings College of the Law notes. “The amendments arguably would streamline the CEQA process for various projects, but at the cost of significantly curtailing public participation.”

Wiener told us that he wants to eliminate lengthy, sometimes unpredictable appeals. “The goal is to make sure we have a good CEQA process but also a more predictable process,” he said. “Right now it’s so chaotic and loose that we have unnecessary delays.”

Aaron Peskin, a former supervisor and neighborhood activist, calls the proposed legislation “a developer’s wet dream. It shuts off or makes impossible citizens’ ability to participate in the environmental review process.”

WHAT ARE THE ABUSES?

At issue is a critical part of city planning, mandated by state law and sharpened by years of court decisions. Before any project is approved, the city’s environmental review officer (ERO) must either determine that the proposal “could not have a significant impact on the environment” or is exempt by law from CEQA review. If not — if in fact the proposal could have an impact — then the project sponsor has to pay for a full environmental impact report.

If any member of the public thinks that the ERO’s decision is wrong — or believes that an EIR is inadequate — he or she can appeal to the Board of Supervisors. An appeal halts all work on the project until the supervisors resolve it.

If the board rejects the environmental review, it doesn’t kill the project — planners just have to go back and write, or rewrite, an EIR.

On a practical basis, appeals are relatively rare — the city, Peskin told us, makes tens of thousands of CEQA determinations every year, and at most a couple dozen get appealed. “I don’t understand what the abuses are,” Peskin said.

But in some cases, opponents of a project file a CEQA appeal after they’ve lost at all the policy bodies — and that, Wiener argues, just slows things down. “If you’re going to appeal, then appeal, but don’t wait around,” he said.

But Calvin Welch, a member of the Council of Community Housing Organizations who has been working to build affordable housing for more than 30 years, told us he doesn’t see the problem. “CEQA never gets used to stop affordable housing,” he said. “It just doesn’t happen.”

Perhaps the most profound change would eliminate any CEQA appeal for a project that has to go to the supervisors anyway. Wiener’s idea: if the board already has to sign off on, say, a zoning change or a special use district or any finances of a project, the environmental review can be done at the same time. “It’s as if there’s an automatic appeal,” he said.

But that conflicts with the concept of environmental review, critics say. No member of the public has the legal right to a sustainable or environmentally sound project; planning commissions, city councils, and county supervisors can, and often do, approve horrible projects.

But everyone has the right to a complete and fair environmental review. CEQA mandates that the decision-makers accept and acknowledge the consequences of their decisions — and if an EIR is flawed, those consequences can be understated.

Wiener would do away with the mandate that the supervisors hold a hearing, accept appeal briefs, and address CEQA questions as a distinct and separate part of a project approval. “The public would be denied the right to a hearing before the full elected body on the adequacy of an EIR or other CEQA determination,” a Planning Department staff analysis states. “And if a member of the public introduced new information at the committee hearing, there would be no way for the city to respond to or modify the environmental document.”

Among the projects that this provision would affect — where the public would lose the right to appeal an environmental determination: The America’s Cup, the Central Subway, the Parkmerced rebuild, the 8 Washington project, and the California Pacific Medical Center’s billion-dollar hospital proposal.

The proposal would also change the standard city planners apply when they review projects. The current rules require that the city show there is a “fair argument” that a project would have a significant environmental impact. The new language would mandate the staffers find “substantial evidence” that a full review is needed.

And while the Board of Supervisors now has to certify that an environmental determination is accurate and correct, Wiener would change that to a determination that the city has made “an independent judgment” on the merits of the review. That, the Hastings lawyers state, “is a more discretionary standard that would be used to uphold an EIR certification decision even if the board determines that the conclusions and findings in the EIR are incorrect.”

A lot of the language in the complex package of CEQA changes involves public information and notice. Many of the lawyers and activists who have reviewed the legislation say it limits public notification of some CEQA determinations, particularly when the city concludes that a project is categorically exempt.

“If the ERO determines that a project is exempt from CEQA review, he may or may not be required to provide public notice of this determination,” the Hastings analysis states.

There’s no question that it would add to the complexity and burden of filing an appeal; and shorten the time frame for doing so — in a way that some say would actually encourage more lawsuits.

Kevin Bundy, a lawyer with the Center for Biological Diversity, argues that “The proposed amendments create a situation where appellants will be required to file litigation prior to the board’s decision on appeal.”

It’s a complicated situation, but in essence, the new Wiener rules would set the timeline for project approval at the first stage of policy decision — and if the supervisors overturned an environmental appeal, the clock for the project would be set back to that day.

That could upset the statutory timeline for CEQA lawsuits — and thus lead to more cases.

Wiener acknowledged that there were a lot of technical issues like that one that still need to be resolved. “We will be conferring with the people who have commented on the legislation and making the appropriate changes,” he said.

He added, however, that he sticks by the essential parts of his proposal despite the opposition: “There are a lot of CEQA lawyers out there,” he said. “And they aren’t always right.”