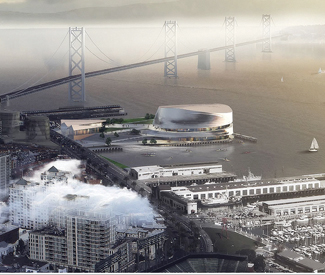 No standard defensive strategy is likely to stop the Golden State Warriors, Mayor Ed Lee, and their huge team of partners and employees from dominating the game of approving construction of a new basketball and concert arena on San Francisco’s central waterfront. That became clear on Nov. 14, as the political operation overcame fire, darkness, and neighborhood-based opposition for the first big score.

The Board of Supervisors Budget and Finance Committee was set to consider declaring the project, which the Warriors want to build on Piers 30-32 by the 2017 basketball season, to be “fiscally feasible,” recommending it move forward with more detailed environmental studies and a term sheet nailing down myriad administrative details.

Before the 11am hearing, the project team held a packed press conference to announce that the Warriors had volunteered to abide by the city’s local-hire standards for public works projects, hiring San Francisco residents or military veterans for at least 25 percent of total construction jobs and 50 percent of apprenticeships. A beaming Lee praised the deal as an “unprecedented” indicator of the Warriors’ willingness to partner with the city.

Strikingly missing at the press conference was Sup. Jane Kim, in whose District 6 the project would be built — over the objections of many residents who are raising concerns about the loss of waterfront views, huge crowds attending what is projected to be more than 200 events per year, high interest rates paid by city taxpayers, the project’s accelerated approval schedule, and other concerns.

Kim is one of the three members of the Budget Committee, which held its meeting despite an electrical fire in the basement of City Hall that knocked out power to the building. Portable photography lighting was brought in to supplement the emergency backup lights, making it bright enough so the televised show could go on but giving a strangely surreal feel to the proceedings and reinforcing the urgency project supporters feel to move this forward without delay.

Kim raised the concerns of her constituents, winning support for amending the resolution to ensure the Citizens Advisory Committee — whose chair was given two minutes to convey how its members feel steamrolled by the accelerated process, asking it be delayed by a month or two — will be given chances to weigh in and pushing the EIR scoping meetings back a few weeks to January.

In the end, Kim and the committee voted to move the project forward. A few days later, on Nov. 19, the process repeated itself with another flashy press conference in the Mayor’s Office — with another important union endorsing the project — followed by the Land Use Committee responding favorably to the project.

The full Board of Supervisors was scheduled to approve the project’s fiscal feasibility the next day, after Guardian press time, but there was little chance that the full board would take any other action than giving the Warriors, Lee, and their huge roster of teammates what they want.

This despite unusual financing and some very real concerns about waterfront development.

Mayor Lee — who has placed a high priority on this project since announcing his deal with the team in May — emphasized its job creation and contribution to the local economy during the Nov. 19 press conference.

“I remind people, this is a private investment of hundreds of millions of dollars,” Lee said of a project pegged to cost around $1 billion. “It means a lot of jobs, and that is so important to all of us.”

The project is expected to directly create 4,300 jobs: 2,600 construction jobs and 1,700 permanent jobs, including those at the 17,000-seat sports and entertainment arena and the 250-room hotel and 100,000 square feet of retail and restaurants that would be built as part of the project.

“We’ve been spending a lot of these last many months describing what it is we want to build,” Warriors President Rick Welts said at the press conference before casting the project in grander terms. “That’s not really what we’re building. What we’re really building are memories.”

But city residents and workers are looking for more tangible benefits than just the highs of watching big games or concerts. The building trades were already expected to strongly support the project, which only got stronger with last week’s local-hire deal. Labor’s support for the project was broadened on Nov. 19 with the announcement that the Warriors agreed to card-check neutrality for the hotel, making it easier for its employees to join UNITE-HERE Local 2.

“Thank you for being a partner and we’re looking forward to working with you in the future,” Local 2 head Mike Casey, who notably also serves as president of the San Francisco Labor Council, said to Welts at the event before the two signed a formal agreement.

In addition to allowing the hotel workers to easily organize, the Warriors agreed to card-check neutrality for vendors at the arena with at least 15 employees and those outside the arena with more than 45 employees, as well as giving those who now work Warriors’ games at Oracle Arena first dibs on jobs at the new arena.

“I think that speaks a lot about what the project is. It’s not just a San Francisco project, but a Bay Area project,” Casey said. He also said, “I want to thank the mayor for bringing people together and laying all this out.”

While Lee and the Warriors do seem to have this deal pretty well wired, this is still a San Francisco project, a complex one on the politically and environmentally sensitive waterfront that city taxpayers are helping to pay for and one for which the residents there will bear the brunt of its impacts.

Lee, Office of Economic and Workforce Development head Jennifer Matz, and other key project supporters have repeatedly claimed this project is funded completely with private money, noting how rare that is for urban sports stadiums these days.

But in reality, city taxpayers are spending up to $120 million for the Warriors to rebuild the unstable piers on which the arena will be built, plus an interest rate of 13 percent, an arrangement that has drawn criticism from a key source.

Rudy Nothenberg, who served as city administrator and other level fiscal advisory roles to six SF mayors and currently serves as president of the city’s Bond Oversight Committee, wrote a Nov. 12 letter to the Board of Supervisors urging it to reject the deal.

“Quite simply, I would have been ashamed of such a recommendation,” Nothenberg wrote of the high interest rate. “In today’s markets it is incomprehensible to have such a stunning recommendation brought to your honorable Board in such haste.”

Johnston and Matz each disputed Nothenberg’s characterization, citing a report by the project consultants, the Berkeley-based Economic and Planning Systems Inc. (EPS), that 13 percent is a “reasonable and appropriate market based return.”

Matz told us the rate was based on the risky nature of rebuilding the piers, for which the Warriors are responsible for any cost overruns. And she compared the project to the massive redevelopment projects now underway on Treasure Island and Hunters Point, from which the city is guaranteeing powerful developer Lennar returns on investment of 18.5 percent and 20 percent respectively.

Johnston, who was press secretary to former Mayor Willie Brown and worked with Nothenberg on building AT&T Park and other projects, told us “I have great respect for Rudy.” But then he went on to criticize him for taking a self-interested stand to defend the views from the condo he owns nearby: “They don’t want anything built in their neighborhood. They would rather leave it a dilapidated parking lot.”

But Nothenberg told us his stand is consistent with the work he did throughout his public service career in trying to keep the waterfront open and accessible to the public, rather than blocking those views with a 14-story stadium and hotel complex.

“I have a self-interest as a San Franciscan, and after 20 years of doing the right thing, I don’t want to see this rushed through in an arrogant way that would have been unthinkable even a year ago,” Nothenberg told us. “I spent 20 years of my life trying to deal with waterfront issues.”

He is being joined in his opposition by other neighborhood residents, land use experts such as attorney Sue Hestor, some opponents of the 8 Washington project concerned with the creeping rollback of waterfront development standards, and members of the Citizens Advisory Committee who have felt steamrolled by the rapid process so far and unable to thoroughly discuss the project or the neighborhood’s concerns.

“We would like to slow this process down,” committee Chair Katy Liddell told supervisors on Nov. 14. “Things are going so quickly.”

DETAILS OF THE DEAL

The $120 million plus interest that the city will owe the Warriors would be offset by the $30 million the team would pay for Seawall Lot 330 (the property across from the piers where the hotel would be built), a one-time payment of $53.8 million (mostly in development impact fees), annual rent of nearly $2 million on its 66-year lease of Piers 30-32, and annual tax and mitigation payments to the city of between $9.8 million and $19 million.

Kim raised concerns at the Budget Committee hearing about the more than 200 events a year that the arena will host, but she was told by Matz that’s necessary to make the project pencil out for the Warriors.

Many of the project’s financial and administrative details are still being worked out as part of a term sheet going to the Board of Supervisors for approval, probably in April. Other details will be studied in the project Environmental Impact Report, which is expected to come back to the board in the fall.

The Department of Public Works, Police Department, and — perhaps most critically given its impact on Muni and roadways — Municipal Transportation Agency have yet to estimate their costs.

“We do have a lot of concerns in the neighborhood about this project,” Kim told the Land Use Committee, singling out impacts to the transportation system as perhaps the most important, followed by quality-of-life issues associated with huge crowds of sports fans.

Kim noted that the area already has a problematic transportation infrastructure, with some of the highest rates of motorist-pedestrian collisions in the city and a public transit system that reaches capacity at peak times, and said that many residents worry this project will make things worse. The EIR will deal with the transportation details. But Kim praised how about half the space on the piers, about seven acres, will be maintained as public open space: “I think the open space aspect is incredible and it could actually increase access to the waterfront.” In the end, Kim urged project proponents to heed the input of the CAC and other concerned parties because, “This could be a very valuable project, or it could also be a disaster.”