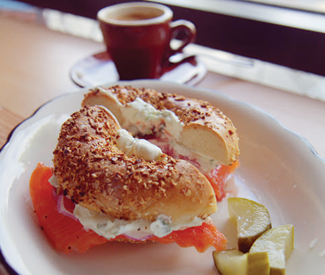 APPETITE Bagels and doughnuts in their many iterations — beignets, malasadas, bomboloni, etc. — are two of the more comforting breakfast or anytime foods. It’s tougher than it should be to find proper bagels, but alongside notable SF sources, the East Bay welcomes a few new arrivals. Here are some tasty spots to hit for an epic morning pastry quest. (When in the East Bay, I recommend fueling up at Berkeley’s just-opened coffee and wine bar Bartavelle — 1603 San Pablo Ave, Berk. www.facebook.com/BartavelleCoffeeWine — with a well-executed Sightglass Coffee cappuccino in the tiny-but-charming former Cafe Fanny space.)

First, bagels. Like anyone who has ever lived near or in NYC, I miss New York bagels. There’s nothing like properly boiled and baked bagels, with dense, chewy insides and cracklin’ exterior, topped with excellent schmear and lox. We get little here comparable to Manhattan favorites Barney Greengrass, Ess-A-Bagel, and Russ & Daughters. The short-lived Spot Bagel got close; now in San Francisco the excellent Schmendricks pop-up in Fayes Video and Espresso Bar (Wednesday and Friday mornings, 3614 18th St., SF. www.schmendricks.com) takes me back. The Schmendricks family — Brooklyn native Dave Kover, his wife Dagny Dingman, lawyer-turned-baker Deepa Subramanian, and her husband Dan Scholnick — know their stuff, and I anticipate a permanent storefront in the near future. Until then, the excellent bialys at nearby Wise Sons Deli (3150 24th St., SF. www.wisesonsdeli.com) will have to suffice on off days.

Then there are Montreal-style bagels, less chewy than a NY bagel, slightly thinner yet dense, with a touch of char from wood-fired baking. Beauty’s Bagel (3838 Telegraph Ave, Oakl. www.beautysbagelshop.com) has been the rave of Oakland since opening this summer. The bagels are hand-rolled, boiled in honey water, then baked in a wood-fired oven. Yes, it’s NY prices: $9 for closed, $12 for an open-faced bagel sandwich, or $1.65 per individual bagel in a few choice flavors like sesame, poppy, onion, or everything. But the quality is significant. After apprenticing at a Montreal bagelry and working as a chef at Delfina, Blake Joffe (along with girlfriend Amy Remsen) made roughly 800 bagels a week at Addie’s Pizza Pie in Berkeley before opening Beauty’s. Serving Healdsburg’s coffee king, Flying Goat, they also craft chopped chicken liver, deviled eggs, cream cheeses/schmear and pickles in house, sourcing smoked trout and lox. It’s a fresh lox, scallion schmear, tomato, red onion and capers bagel sandwich that makes me smile.

On to doughnuts. SF masters the best in both at old school Bob’s Donuts (1621 Polk, SF.), particularly at 1 or 2am when they’re pulling those gems out of the oven, or the newer gourmet wave at Dynamo Donuts (2760 24th St., SF. www.dynamodonuts.com), with beautiful Campari or spiced chocolate doughnuts. Oakland gained two doughnut newcomers this summer, Donut Savant (1934 Broadway, Oakl. www.donutsavant.com) and Doughnut Dolly (482 B 49th St., Oakl. www.doughnutdolly.com).

Downtown Oakland’s Donut Savant serves essentially glorified doughnut holes, its Twitter feed making me crave flavors like key lime, pumpkin, or an Old Fashioned with Bulleit bourbon glaze, Angostura bitters cream, and a twist of lemon, which Savant introduced at Oakland’s Art Murmur in August. This led to disappointment when first crossing the Bay Bridge weeks after the store opened only to be met with a sign during regularly scheduled morning hours saying there were no more doughnuts left. When I was able to trek back to the humble shop and find actual doughnuts, I bought every one in sight. Flavors were straightforward, rather than the interesting aforementioned. Chocolate coconut doughnuts holes won out over basic chocolate or vanilla, though a dark chocolate doughnut with a light dusting of sugar was plain but more satisfying. One topped with butter cream stood out with creamy-dry contrast and candied ginger strips.

Doughnut Dolly charms in an alley off 49th Street. Pastel-striped walls and a friendly woman graciously attending each customer makes it feel immediately like a beloved neighborhood secret. By the bottle or glass, Jittery John’s Cold Brew Coffee (www.jitteryjohns.com) is bracingly strong, New Orleans’ style chicory coffee, made by an Oakland local — adding cream or milk makes one $10 bottle stretch to four-five glasses of iced coffee. Dare I say it’s almost worth stopping in just for this eye-opening brew that reminds me of Nola?

Doughnuts are the filled kind (no holes), the strawberry jelly doughnuts superior to a childhood favorite with fresh jam inside. On my visits, flavors were a little basic for my tastes, the “naughty cream” merely a standard vanilla, the chocolate was pudding-like rather than dark and seductive, but the doughnuts themselves have a soft, gratifying texture. Bringing additional doughnuts home, a few seconds in the microwave ensured they melted warm in my mouth.