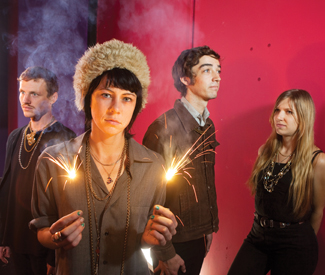 GOLDIES You always hear of those artists that simply must keep creating, regardless of location, monetary resources, health, or free time. It’s the urge, the craving, something deep in the pit of their being. Idle hands and all that. I get the feeling this is just how it is for Greer McGettrick, the Mallard’s lead vocalist-guitarist. There’s a fire in her belly, and it burns from a sonic tinder.

Let’s take just this year as a case example. The Mallard released its psych-garage influenced debut full-length, Yes on Blood, in March on John Dwyer’s Castle Face Records to increasingly rave reviews. The band opened for Ty Segall, Thee Oh Sees, Shonen Knife, Hot Snakes, and countless others, at shows at places like the Verdi Club, Slim’s, and Bottom of the Hill. It toured with the Fresh and Onlys’ Wymond Miles. It put out a split seven-inch with Thee Oh Sees. It’ll have a plexi seven-inch out later this month. It contributed a stirring cover of the classicaly morose track “There She Goes Again” to Castle Face Records’ Velvet Underground and Nico tribute album. Oh, and McGettrick has had a few art shows around the city, showcasing her intricate woodcuts.

In addition to all that, the fuzzy San Francisco four-piece is now working on its follow-up to Blood. “I’m still writing a lot, but I feel like it’s more of a record for me,” says McGettrick, sitting outside the coffee shop-video store where she works. “I feel like Yes on Blood was more of a record for San Francisco, an homage, where it was like, ‘These are the bands that I love and I’m drawing from them’ — there’s the Thee Oh Sees song, the Ty Segall song, the Intelligence song.”

Or, as she’s been know to describe it, the band makes “inside-out-echo-laser-garage-psych-rock.”

“This is more of an album for me in that it’s a lot weirder, a lot darker, more personal,” she says. “I’m learning how to use my voice versus yelping.”

Live, that yelping comes across as more of a gritty punk plea, an emotional core tumbling out, backed by McGettrick’s noisy guitar work; “boy” Dylan Tidyman-Jones on guitar, keys, and backing vocals; “girl” Dylan Edrich on bass; and Miles Luttrell on drums.

This current formation of the Mallard is here after a few false starts. When McGettrick first moved to SF three years back, she gathered friends to start a new band, but it quickly fizzled. So she started again. “I just needed to keep playing songs, keep playing shows,” McGettrick says.

She’d already been in bands for years before her move to the Bay Area. The Studio City, Calif. native was part of the Fresno music scene for five years after college. “I kind of got stuck there, but it was good for me. There are some great people there, some really talented musicians, there’s just not a lot to do. A lot of people move away once they realize there’s something else out there.”

Once in SF, she clicked with the booming garage rock scene, and fortuitously met Dwyer. She played him some of her raw home recordings and he told her to go record more, and he’d put them out on Castle Face.

“It’s a really great scene,” McGettrick says. “Living in Fresno for five years — where it was just such a struggle to get other bands to play from out of town, and it was hard to get any momentum there. People moved away, bands broke up — it got me to work a lot harder. I moved to San Francisco and it kind of seemed easy. There’s all these bands, all these shows, people go to shows. It feels nourishing. We’re really lucky to live in this city.”